Spoiler Alert - If you haven't seen Season 3 of Downton Abbey and have managed to avoid all of the spoilers that were posted everywhere after the finale, then you should stop reading right after the next two photos....

Back in November, the Central downtown branch of our library hosted an evening dedicated to the Masterpiece Theatre series Downton Abbey, with a "high tea" and a screening of the first episode of Season 4 on a large screen.  Those of you in the UK will have seen Season 4 already, but us folks over here in Canada and the US have to wait until January before the series airs on PBS.   Tickets to the tea were sold out, but a friend managed to snag the last few (free) tickets to the screening, and invited me to join her and her daughter.

The series has been criticised for its historial inaccuracies and a rather rosy, nostalgic view of English society and the class system, but I don't watch the show for a history lesson - I watch it for the characters (Violet, Carson, and Mrs. Hughes are some of my favourites) and the visuals (OMG, the dresses!).  Also, it provides a much-needed respite from the rather dark and violent series that make up the rest of my limited television viewing (The Walking Dead, American Horror Story, Game of Thrones).


The advertising for the event mentioned that guests were welcome to dress up as characters from the series, or in costume evocative of the era, which I thought was a wonderful idea, especially since the new season is set in the mid-1920's.   I rifled through my closet for something that at least had the silhouette of that era. and decided on a dress I had purchased at Jackpot Vintage a couple of weeks previous. ﻿ 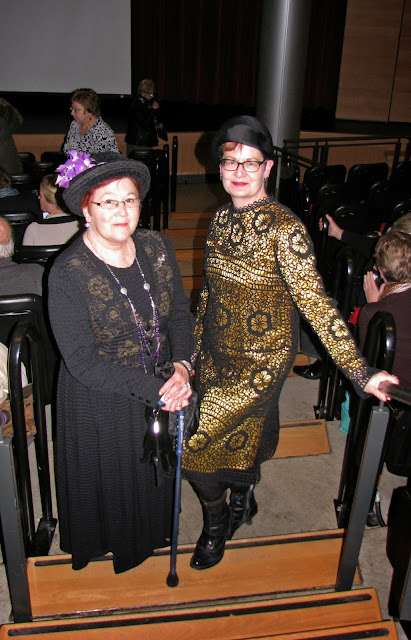 Diane, (left) channels her inner Violet while I wore something with shapes that hinted at the 20's.
My outfit - dress with crocheted overlay - Jackpot Vintage
Boots, long skirt under dress - retail
1940's hat - The Sentimentalist
﻿ 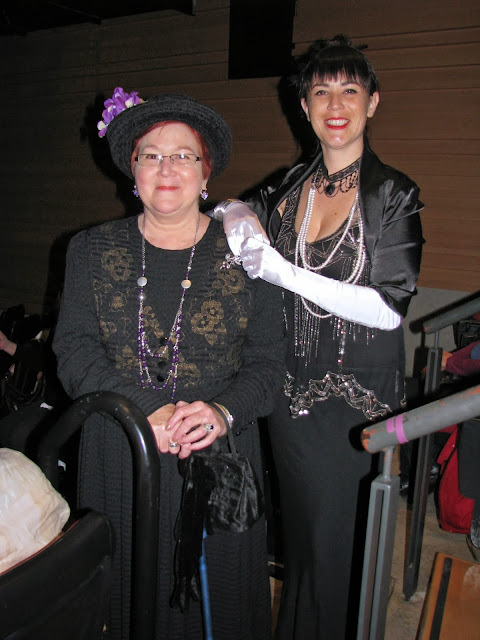 Diane's daughter, coincidently enough, is named Abby, and she had dressed as Michelle Dockery's character, Lady Mary Crawley, for Halloween, so she was able to recycle her costume for the evening.  We received quite a few stares from other members of the audience, and when I looked around the auditorium before the start of the screening, I noticed there were very few people who made any attempt to dress in period costume.  Apparently a couple had won the contest for best costume, but I didn't see them (or there would have definitely been a photo).  There were some women wearing hats, and a couple of people in 20's-inspired dresses, but overall, I was disappointed by the lack of enthusiasm displayed by my fellow DA fans.  I had to remind myself that a large part of the population considers the process of getting "dressed up" (whether that means fancy dress or a costume) more of a chore than a treat. 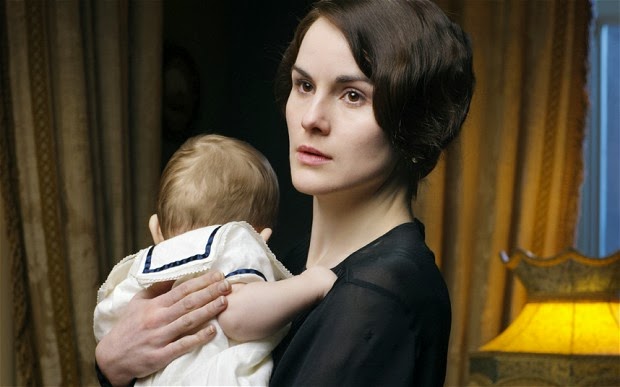 However, I was not disappointed by the screening itself.  It was cool to watch an episode of the show on the big screen, if only because it allowed a closer look at the gorgeous costumes that have been a consistent part of the show. Season 4 picks up 6 months after Matthew's tragic death in the finale of Season 3, and Mary is mired in grief, to the dismay of the rest of  Downton's residents, particularly Carson..  There's a new modern appliance in the kitchen, and Mary's sister Edith sheds her rather frumpy image from previous seasons and appears in a stunning green gown to a rendezvous with newspaper editor Michael Gregson.   I'm hoping this is a sign of things to come for her character, who got a rough deal in Season 3.
Season 4 of Downton Abbey premieres on January 5th on PBS
Posted by Forest City Fashionista at 12:26 PM