Living For the Weekend

Whew!  It's been a very busy couple of weeks and I feel kind of like a dog set loose in a park full of squirrels - which way to go next??  I'd rather have too many things to do than not enough, but when  laundry is piling up, I can't see my kitchen table for the piles of stuff, and there are photos of things from weeks ago that I haven't posted yet, it may be time to take a breather.   There were lots of fun events going on this past weekend, and I managed to put in an appearance at most of them...... 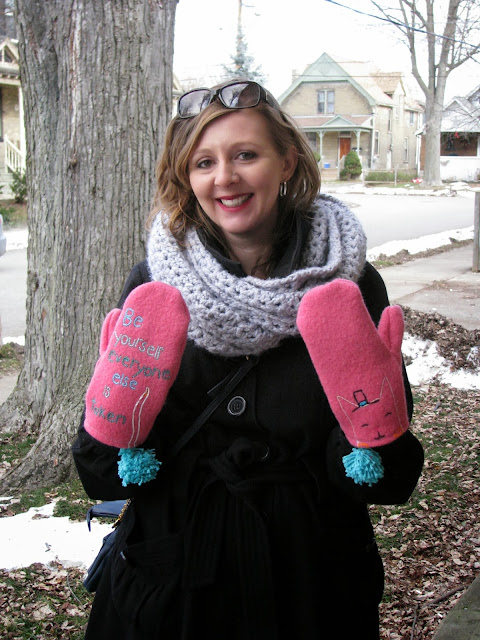 I finally tracked down the winner of the Sew Deer mittens and she picked them up from me this weekend.  Given that Mackenzie has a 4 week old baby at home, she can be forgiven for having other things on her mind besides responding to messages about winning mittens.   She was thrilled to get them and I asked her to model them for a photo. 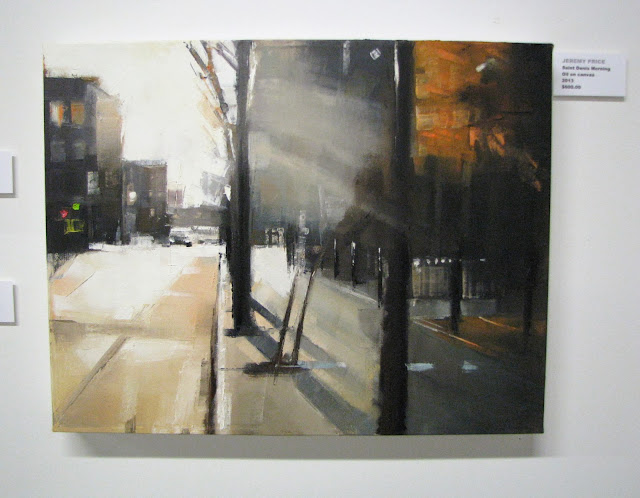 Strand Fine Art Services had a party for the opening of their Christmas Show and Sale.  Amongst the works on offer were paintings by Jeremy Price, who attended art school here in London and is now living in Montreal.  The painting in the photo above is titled Saint Denis Morning.  Price does a masterful job of portraying light in his paintings, which represent the streets and neighbourhoods of his adopted city. 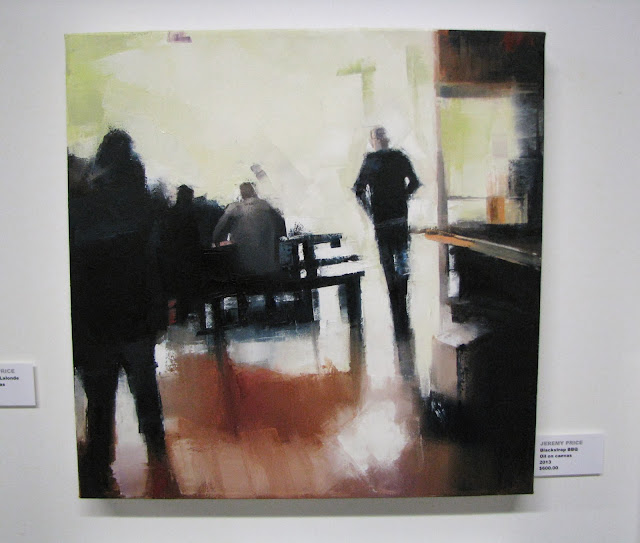 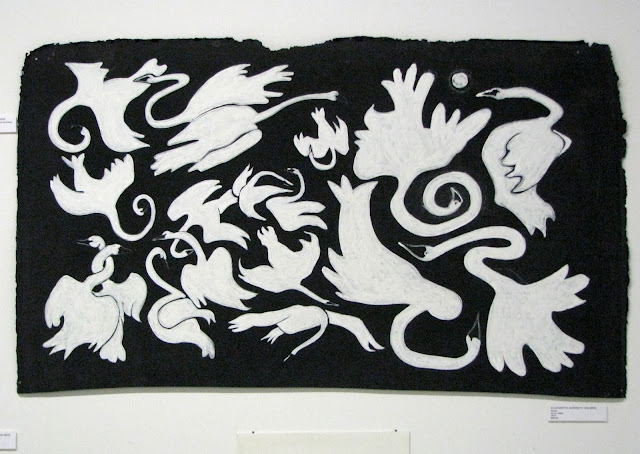 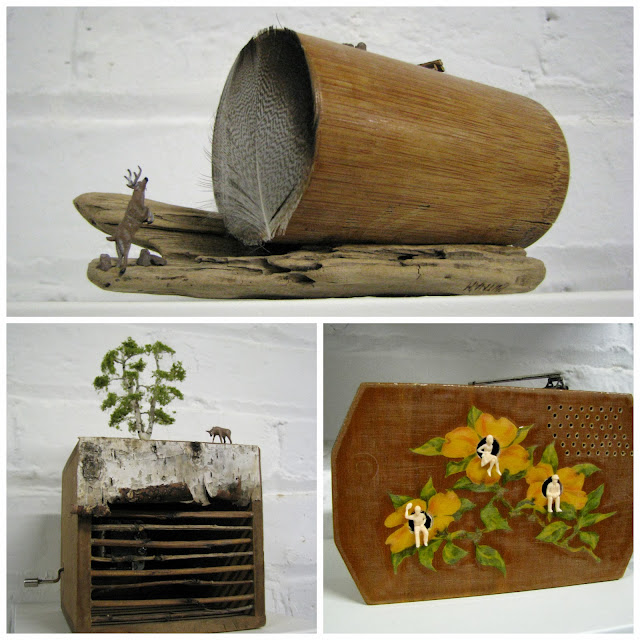 London artist's Leslie Putnam's collection of small music boxes, titled "Gentle Souls Hand Crank Orchestral Balladeers", were my favourite pieces in the show.  The boxes are between 5" and 8" in length and are constructed of natural materials, decorated with tiny animal and human figures.   At $250 each, they are not cheap, but would be a wonderfully unique gift for someone you love (or are looking to impress). 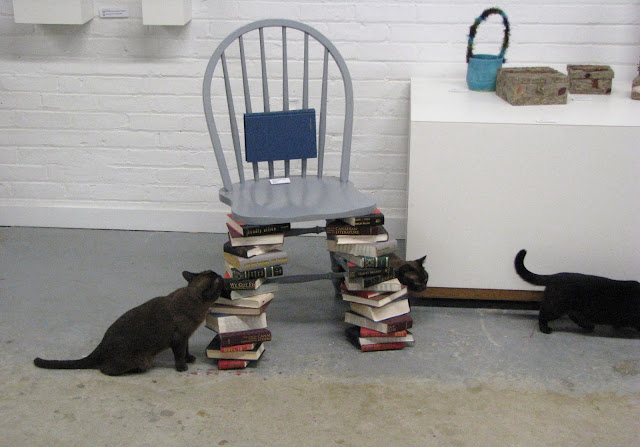 Bill and Andrew's cats were dying to get in on the action so they were allowed to mix and mingle with the art and the guests at the end of the night. 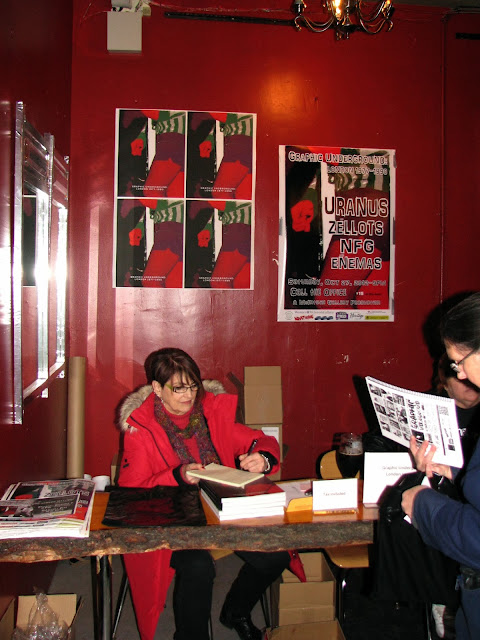 On Saturday afternoon, APK on Clarence Street hosted the the launch of the catalogue that accompanied the exhibit Graphic Underground: London 1977 - 1990   that was on view at the Forest City Gallery last year.  Exhibit curator Brian Lambert and project consultants Mike Neiderman and Dave O'Halloran combined their passion for, and knowledge of, the punk music scene of the era into a visually rich, informative book of the exhibit that celebrates the poster and zine art of a richly creative time in London's musical history. 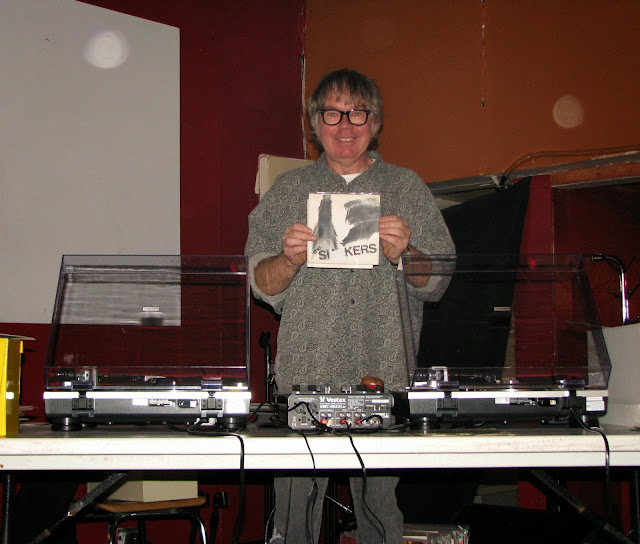 Dave O'Halloran (aka "WhatWave Dave") share DJ duties for the afternoon (vinyl only!) 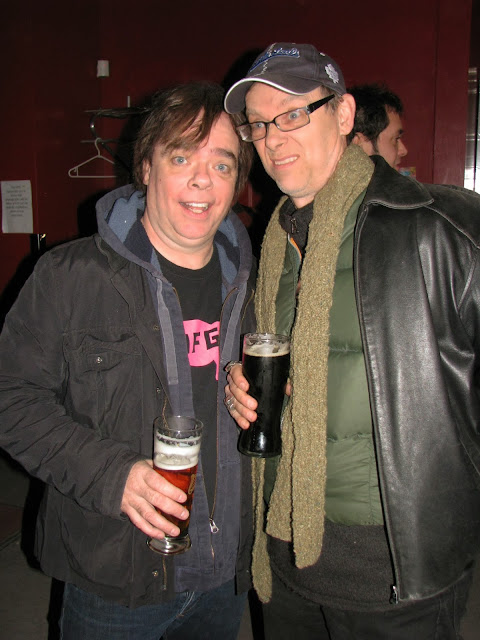 The Lambert brothers, Pete (NFG) and Brian (The Enemas, Nach Dem Tode), have a face-pulling competition for my camera.  Once a punk rocker, always a punk rocker  - at least in your soul.

And Then There Was Roller Derby.... 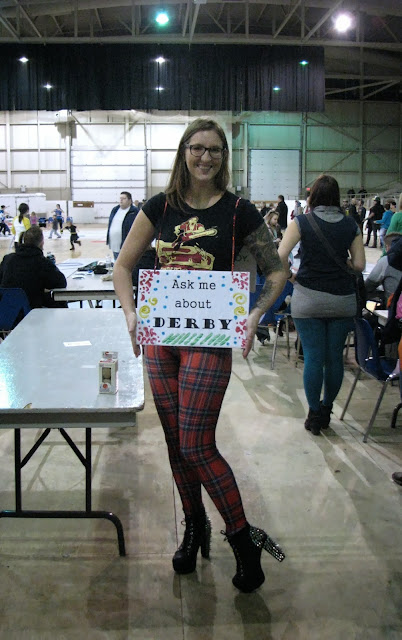 Saturday night was the first game for London's Forest City Derby Guys, the Pack Men, who went up against Ottawa's Slaughter Squad.  I was skeptical as to how the men would play, given that many of them come from a hockey background, where fights are as much a part of the game as stick and skating skills.  Also, as the guys don't wear the booty shorts and fishnets, they have to find other methods to get the attention of the crowd, which translates into daredevil skating moves and bone-jarring hits. 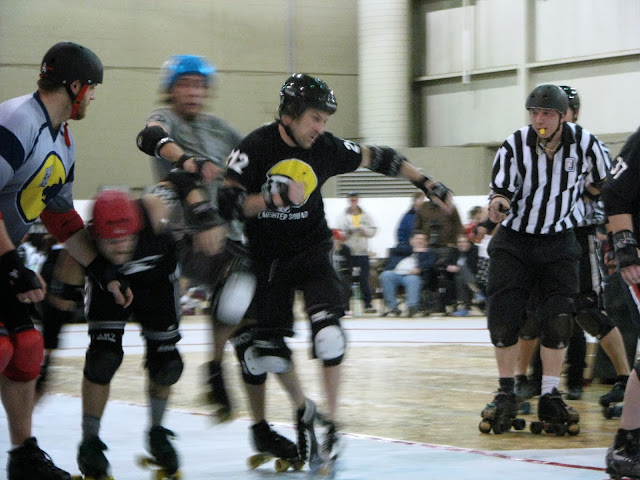 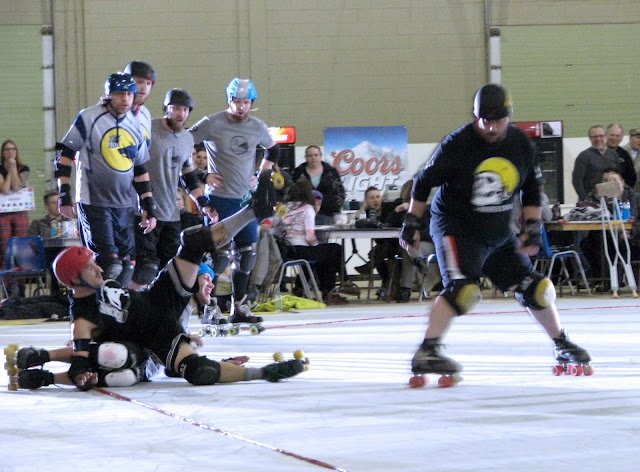 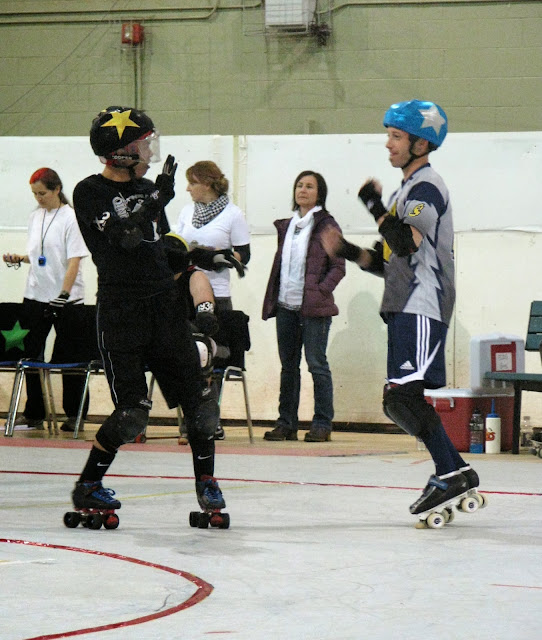 Play was fast and furious, with a consistently full penalty box, resulting in either team rarely having a full roster on the floor.  In the end, London's Pack Men celebrated a 207 - 195 victory over the Slaughter Squad.  Well done guys!   Unfortunately, The Thames Fatales were not as lucky in the second bout of the evening against Buffalo's Nickel City Knockouts  - Buffalo won, 203 to 117. 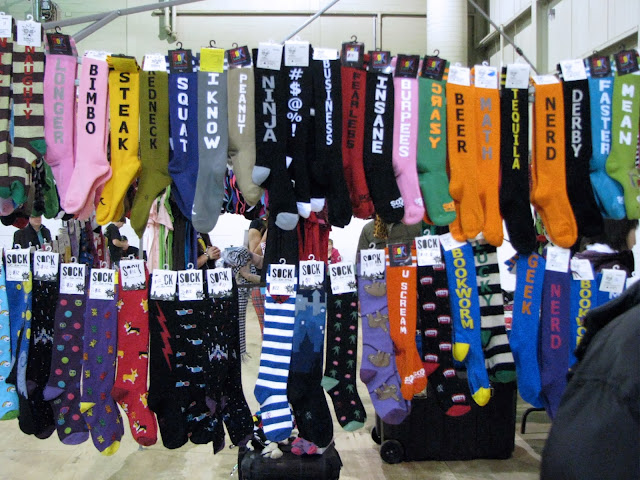 I don't wanna play the game (one hit and I'd be in pieces on the floor), I just wanna wear the socks! 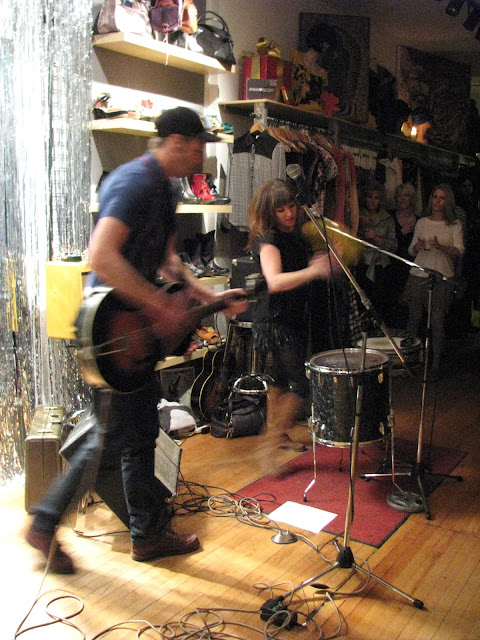 Diane and Laurie, owners of From Mars, celebrated the 20th anniversary of their business this year and invited the band catl. from Toronto to come and do an in-store gig. 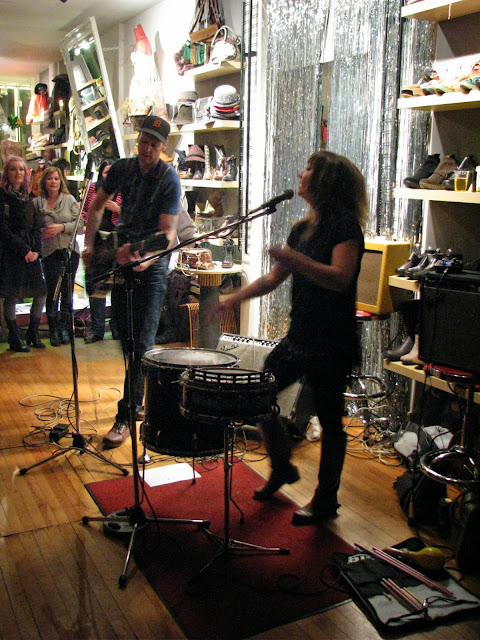 catl.'s music is high energy rhythm and blues, and Sarah Kirkpatrick and Jamie Fleming (catl. the man, as opposed to catl. the band) gave a frenetic, crowd-pleasing performance.  Live music, wine, and shopping - not a bad way to spend a Saturday night!

Sunday afternoon was spent visiting with Maureen Riley, at a show of her new artwork - more about that in another post.
Posted by Forest City Fashionista at 8:20 PM