Each year I look forward to the interactions I have with people I meet at the Manhattan Vintage Clothing Show, whether they be vendors or other browsers/shoppers.  It's not every day that you can be assured of finding at least one person with whom you can wax enthusiastic about a purse shaped like a Dachshund, a pair of beautiful silver cuff bracelets from the 1920's or a Stephen Burrows purple and pink cape/coat. 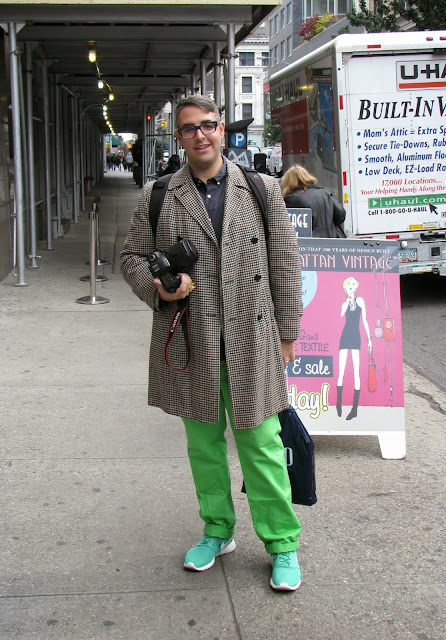 As soon as I arrived at the Metropolitan Pavilion, I ran into Ari Seth Cohen, author of one of my favourite blogs, Advanced Style.  He was shooting photos of stylish folk as they entered the show.  We exchanged a hug and went our separate ways - we had blog photos to shoot! 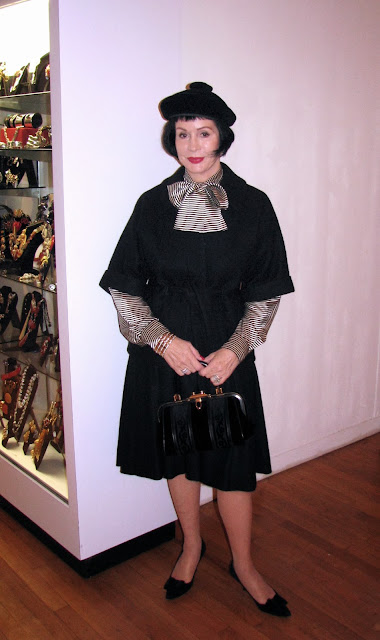 I was barely inside the show when I came across this beautifully dressed woman.  Turns out I wasn't the only person who admired her perfectly put-together outfit, as she appeared on Ari's blog a few days after the show. 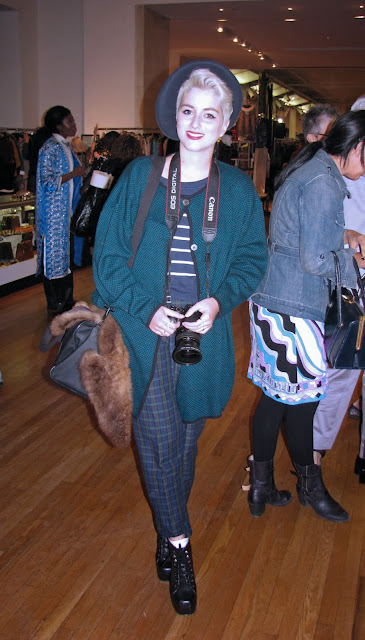 I had the pleasure of meeting this young woman, Debbie Kuzniecky, who was visiting from Panama, where she has a style blog and TV show, Panama Street Style 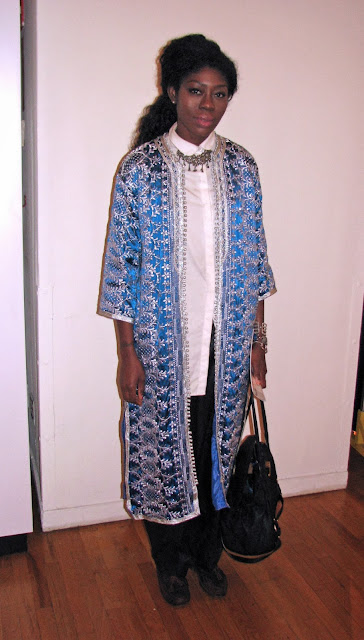 I still hadn't moved past the first couple of booths when I saw this woman in her lovely embroidered coat. 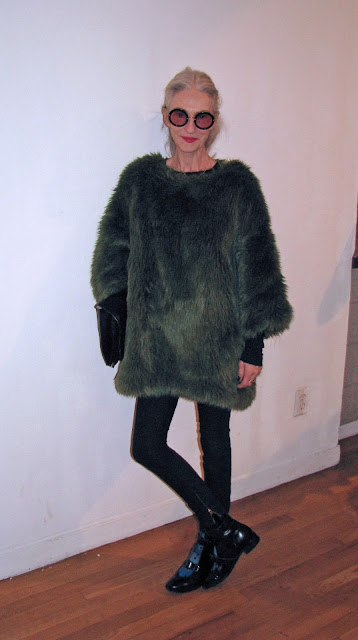 Model, business woman, stylist, and creator of the skin care line RODIN Olio Lusso,  Linda Rodin found time for a visit to the Vintage Show.  She looked both elegant and funky in her fur tunic and leggings. 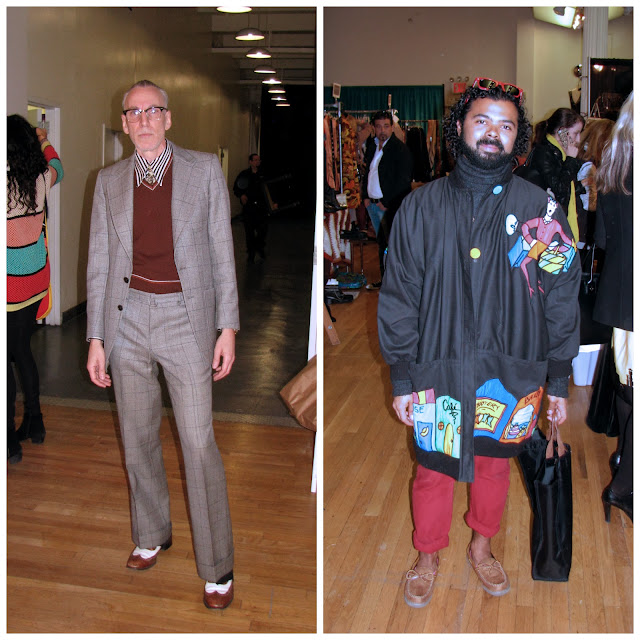 While they may have been fewer in numbers, the men in attendance were certainly no slouches when it came to personal style.  From the dapper suit and brogues of the gentleman on the left to the funky appliqued coat on the man on the right, the show is a magnet for men from all over the style spectrum. 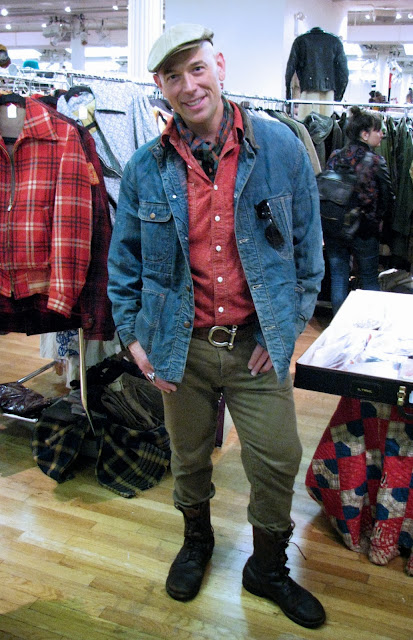 Bob Richter of Richter Design was the epitome of casual cool with his layered shirts, hat and tucked-in pants.  Mr. Richter was a member of the cast of the PBS television series "Market Warriors". 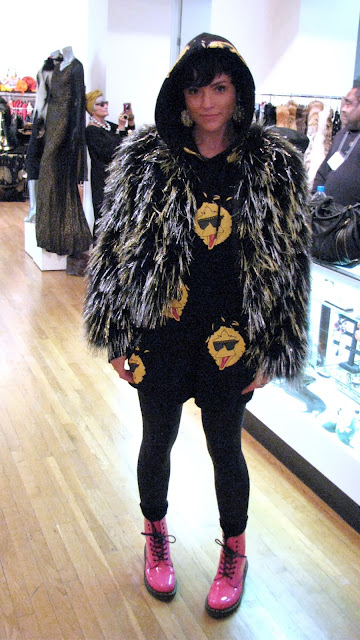 This woman had kick-ass style, from the hood of her badass Big Bird hoodie to the toes of her hot pink Docs.  She was trying on the fluffy, sparkly jacket from Vintagelemonde and I thought that it suited her style perfectly.  In the background you can see Jean of the Idiosyncratic Fashionistas snapping a photo on her phone. 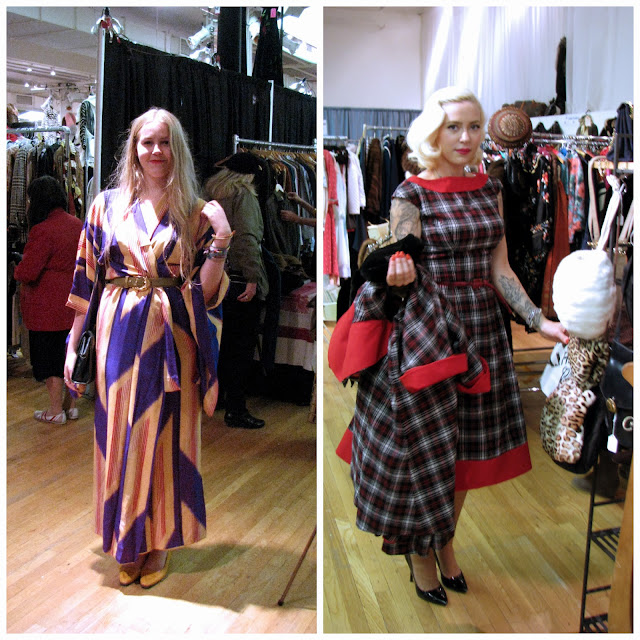 Two beautiful blondes - two very different style aesthetics!  The woman on the left is wearing a kimono she purchased at Miyamoto Antiques, a booth that had a great selection of Kimonos priced under $50.  I purchased a black and red silk kimono coat from the 70's from the same booth for $38.   The woman on the right is Laeticia Harrison-Roberts, aka Misfit Dior, who was doing a photo shoot at the show with fashion writer Lynn Yaeger.  Her 50's style dress had a matching swing coat, both made by her seamstress mother.  You can see photos from their day at the show here. 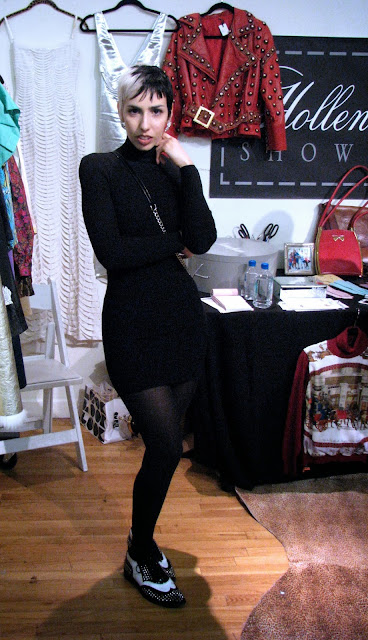 This woman reminded me of Liza Minnelli in the film version of Cabaret.   I loved her striking black-and-white hair and her fabulous black and white studded brogues.  She is a stylist and a blogger, and even her name, Faustina Rose, is suitably exotic. 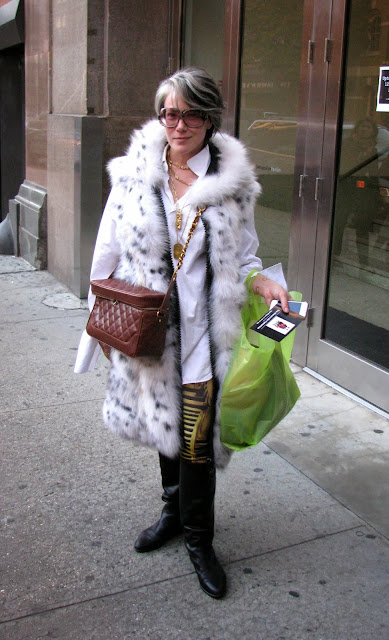 This woman was leaving the show the same time we were, and I admired her fur vest and King Tut print leggings.  She had purchased the Chanel purse she was wearing at the show. 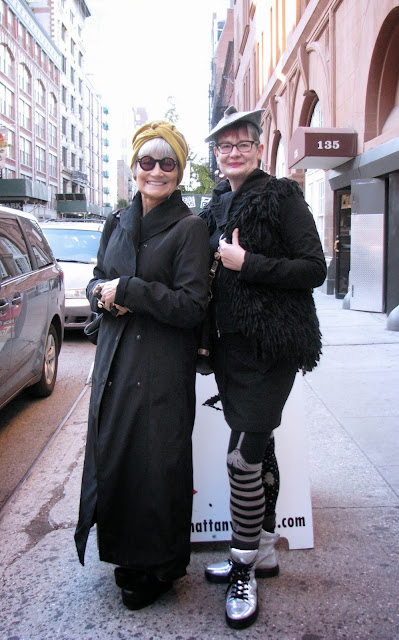 ...and then there was us!  On Saturday, I made second trip to the show, this time accompanied by Jean, one half of the Idiosyncratic Fashionistas.  Valerie, the other half, was at home, cursing her swollen foot for keeping her from the show. 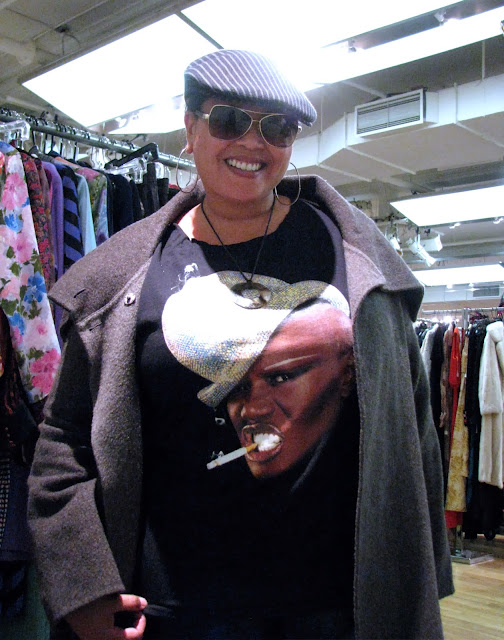 Jean had met the woman in the photo above at the  TraceyChambers Vintage booth where she was working.  When we stopped for a beverage and a breather, she came over to say hello and allow me to admire her fabulous Grace Jones t-shirt. 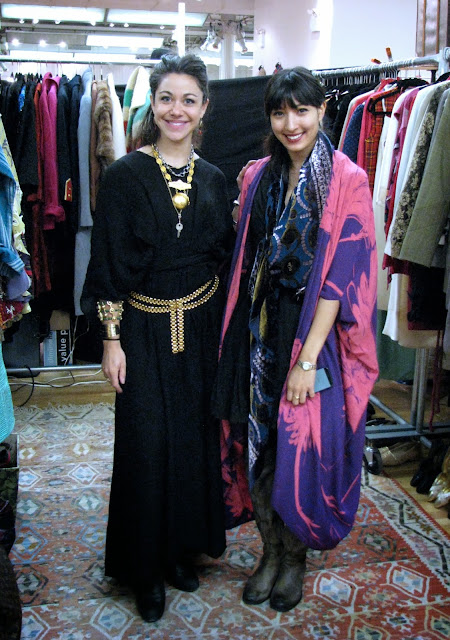 These two young women with the lovely smiles were working at the Mode Marteau booth.  I asked the woman on the right if she would mind modelling the stunning Stephen Burrows coat that they had for sale, and she graciously obliged. 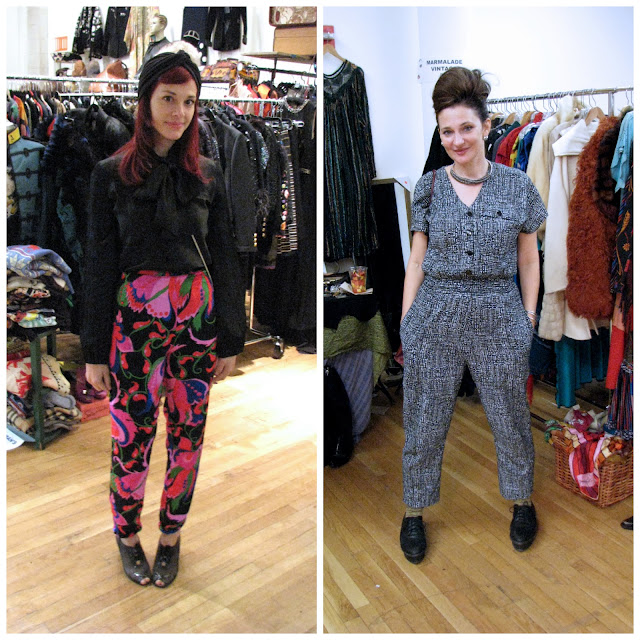 Two vendors who are regulars at the show are Meika (left), owner of Another Man's Treasure, and Hannah, of Marmalade Vintage.   Both women are charming, stylish, and knowledgeable, and they always have very covetable items at their booths.  Hannah was selling the Rudi Gernreich dress featured in my previous post, and Meika's booth had the black and white Italian "face" dress. 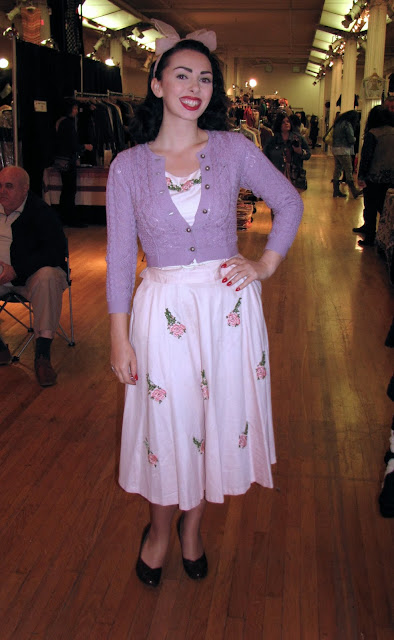 This woman was working at Olive's Very Vintage, and both days she was wearing the most adorable outfits. 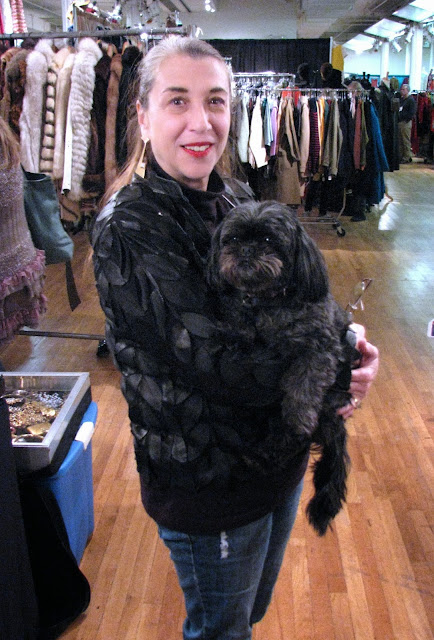 This woman, who was working at the Retrostop Vintage and Couture booth, had a dog that was not only was very well-behaved, but also coordinated quite beautifully with her leather embellished jacket. 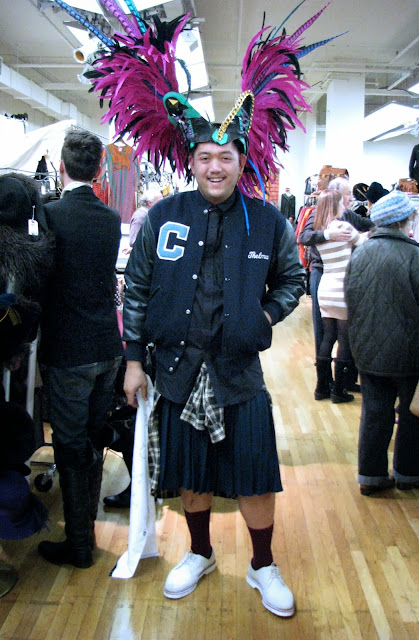 Theo Banzon, of Paradox Designs, was wearing his aunt Thelma's jacket, and I asked him to model a headdress from his booth that had fallen off of a mannequin.  An awesome outfit all around!   His jacket got me thinking about how the name Thelma is one of those names associated with a particular time period and is unlikely to ever have a resurgence in popularity. 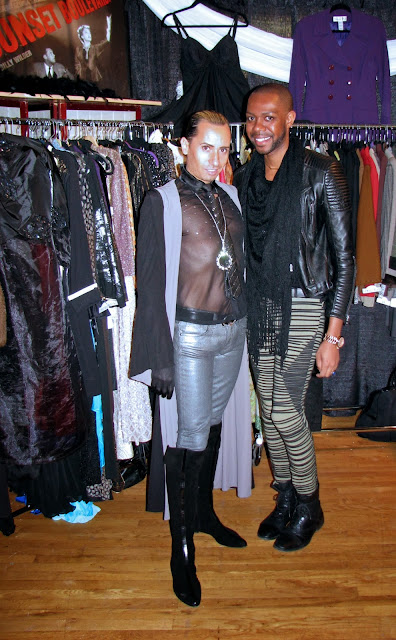 My favourite couple, Filippo and Pervis, of Sunset Blvd.Vintage were rocking their usual over-the-top fabulous style, and showed me some photos from their wedding in the summer.

Thanks to the vendors, and shoppers, who allowed me to photograph them.  It was so much fun, and hopefully I will get to see them again next year!  For more photos of show, see the Idiosyncratic Fashionistas' post here.
Posted by Forest City Fashionista at 11:35 PM