What I Wore to Get My Boobs Squished*


*aka the annual Mammogram 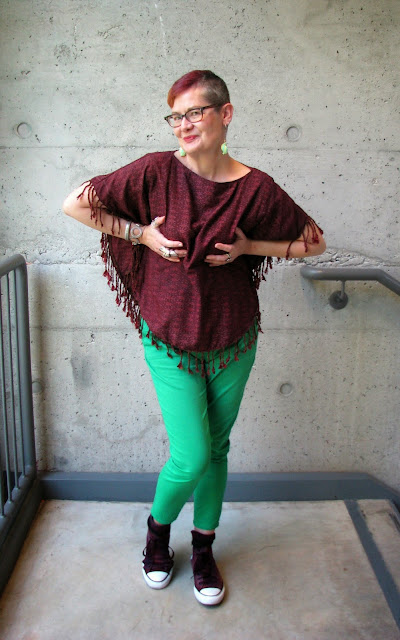 About 5 years ago my mother was diagnosed with Breast Cancer, and had a mastectomy.  As she was in her 70's, there was not as much concern about how this might increase my chances of developing the disease as there would have been had she had been younger.  However, as a precautionary measure, my doctor sent me for my first mammogram.  For most women fortunate enough to not require one earlier due to family history or a self-discovered lump, this is a right of passage into one's 50's.   Mammograms can be embarrassing, awkward, and painful.  No one likes having a stranger stick your girls in between two glass plates and mash them together (well, maybe some people do..).   If your breasts are on the smallish side like mine, a mammogram requires much squeezing and stretching of skin and tissue in an effort to get a good image.
There have been concerns raised about the dangers of the radiation damage from mammograms and whether or not they are really necessary.  My very first one found a mass that may or may not have caused problems later, that I hadn't found on my own, and that a colleague who is my age had cancer discovered (which was successfully treated) during her routine mammogram just after I had finished with my own ordeal, so I think the risk and discomfort is worth it.
﻿ 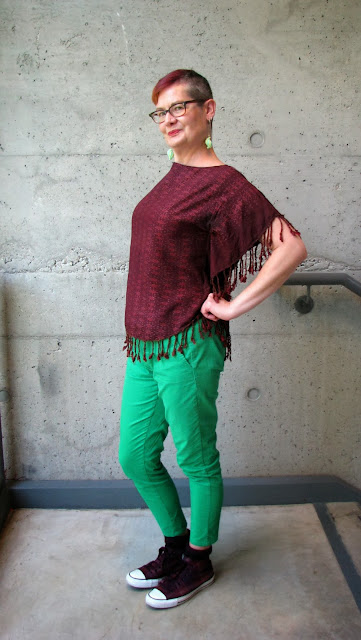 ﻿
﻿
Fringed top - thrifted
pants - super cheap at the GAP
plaid Converse - retail
Earrings - made by Candice Sheriff
﻿
They may not be large, but they're still perky and they're mine, and I want to keep them for as long as I can.  If you're over 50, and you haven't had a mammogram, think about having one.  This is my personal opinion based on my own experience, I'm not being paid by the Canadian Cancer Society.

And in other, unrelated, but exciting news...

I will be guest-posting occasionally over at Kitsilano Kitty's Closet, a Vancouver-based online shop for pre-loved clothing and accessories.  A friend sent me a link a while back to their website that mentioned they were looking for guest bloggers, so I figured why not?  Some posts may be ones that have appeared on my own blog, some will be new.
Posted by Forest City Fashionista at 11:19 AM