I will say right off that I am not, or have ever been, a "Beach Bunny".  Trips to the beach were not a regular part of my childhood, and when we did go, I spent my time building sandcastles or splashing by the shore as I didn't know how to swim.  As an adult, I found that my "quick to tan" skin of my teenage years had changed to "quick to burn", so I don't spend much time sitting in the sun, and when I do, it's wearing 30+ sunblock.   I never did learn how to swim and despite all the items in my wardrobe, a bathing suit that fits is not one of them.  While others cite films like "Beach Blanket Bingo",  or  "Blue Hawaii", as the ideal beach vacation film, I have a soft place in my heart for "Monsieur Hulot's Holiday", a comedy starring and directed by French film maker Jacques Tati.   A black and white film, released in 1953 with a jazz score, and minimal dialogue, it is a masterfully created film, with  brilliant moments of slapstick from Tati, who was a gifted physical comedian.   You can see the film's trailer below where Monsieur Hulot's arrival at the seaside resort disrupts the lives of everyone else there.

I like to make at least one trip to the beach each summer simply because is one of those things you do in summer, and London is within an hour's drive of a number of beaches along the shores of Lake Erie and Lake Huron and there is a very nice provincial park, The Pinery, that is my favourite.  As it was the last long weekend of summer, my friend Heather (who has a car - did I mention that I don't drive either?) and I packed a lunch, and other beach necessities and headed to the Pinery Provincial Park.  The sky was cloudy but it was warm, and we were optimistic. 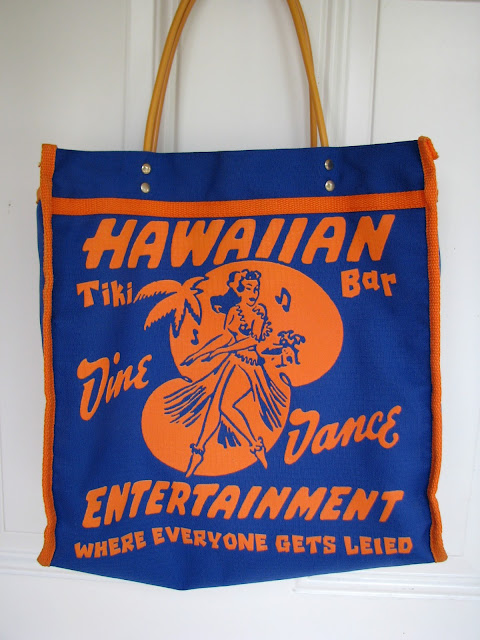 I packed my stuff in my awesome Hawaiian-theme beach bag

When we arrived at the entrance to the park, the nice young woman in the booth informed us that "the water isn't safe for swimming due to the very high bacterial content.  If you choose to go swimming, it's at your own risk, but as long as you have a strong immune system and don't ingest any of it, you should be okay."   We looked at each other, and sighed.  Cloudy, AND we can't go in the water.  Good thing we brought food and books. 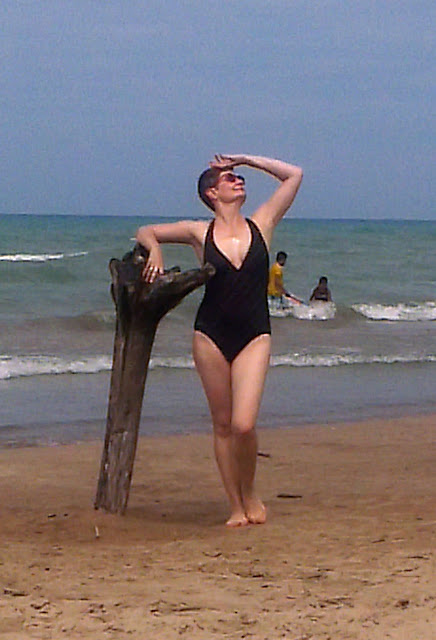 A friend had loaned me a bathing suit, which surprisingly, fit perfectly, and was one of the most flattering bathing suits I'd ever worn.  (She may not be getting it back - sorry Marnie!) Since the   beach wasn't crowded I was able to get in one glamour shot using a rather photogenic piece of driftwood as a prop.  You will notice in the background that there are a couple of people braving The Waters of Death. 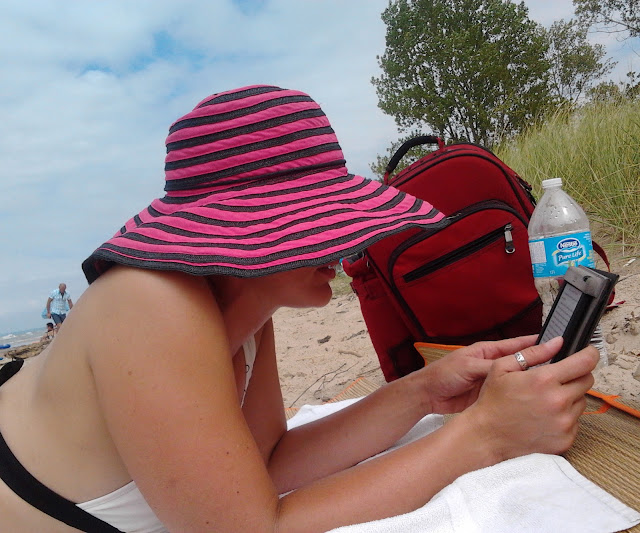 The essentials - hat, insulated pack with food (broccoli and cranberry salad, quinoa, edamame and almond salad, and watermelon), water, sunscreen, and reading material.   The clouds eventually broke and to our delight, the sun came through.  There was a nice breeze, and the sounds of the waves hitting the shore were just the thing to clear one's head after a stressful week.  That, and the latest issue of Entertainment Weekly with a cover story on Joss Whedon.  Heather chose to read Dystopian fiction on her e-book reader. 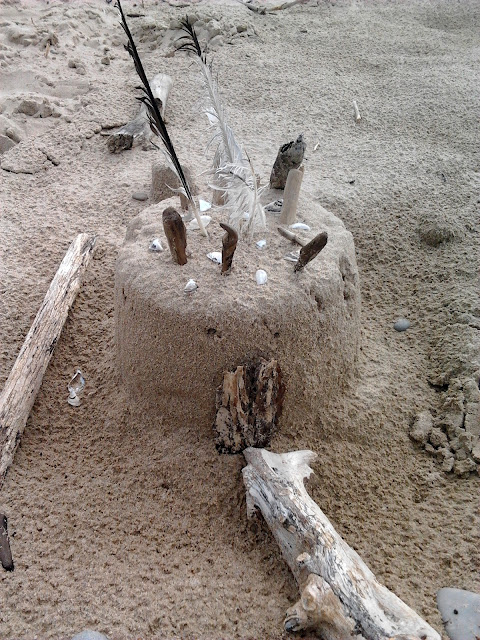 After we had spent a sufficient length of time lazing about, we took a walk down the  beach and discovered this sandcastle.  The creator had compensated for the simple shape with some creative ornamentation. 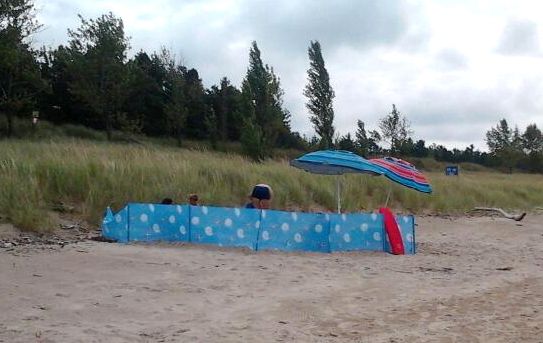 When my family did go to the beach when I was a kid, preparations were pretty simple - a cooler with some snacks, a couple of towels, your bathing suit, and a pail and shovel.   We were amazed at the amount of stuff people had with them - including the people above who had even brought their own fancy wind screen.  People were laden down with multiple coolers, tables, umbrellas, barbeques, chairs, inflatable rafts, toys, etc.  Rather than "getting away from it all", it seemed that they had brought it all with them.

The day ended with a stop at the Lickety Split Ice Cream Parlour in Parkhill on the way home.  Turns out it would take me longer to recover from the sun exposure than the two scoops of ice cream I had.... 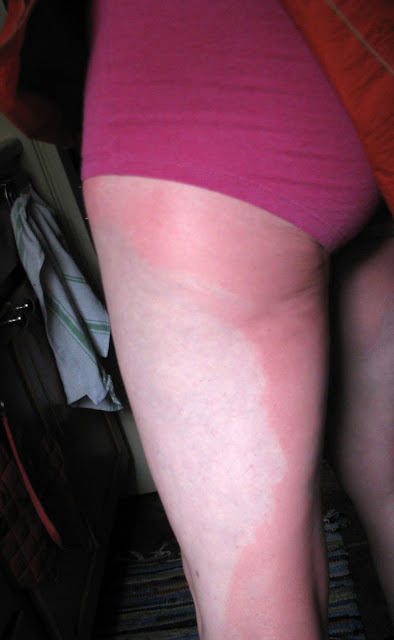 This is what happens when you think you put sunblock on the backs of both of your legs, but it turns out that you only did one....OWWWWW!  Solarcaine is my friend right now.

Even though it's only the second day of September, if you work in a University, it means Fall is here, regardless of what the calendar says.  I hope you all had a good holiday weekend, and good luck getting the kids out of bed tomorrow morning!
Posted by Forest City Fashionista at 7:39 PM

Labels: a day at the beach, a fifty year old woman in a bathing suit, Monsieur Hulot's Holiday, The Pinery Provincial Park