A Bit of A Dog's Breakfast - Bloggers, Bags, Bands and Perogies

This post is a bit of a mish mash of of some cool stuff that I found out this week, and some photos from my wanderings yesterday.

First, congratulations are in order.  My friends Jean and Valerie, aka The Idiosyncratic Fashionistas, were included in Stylecaster's 2013 list of the 50 Most Stylish New Yorkers. 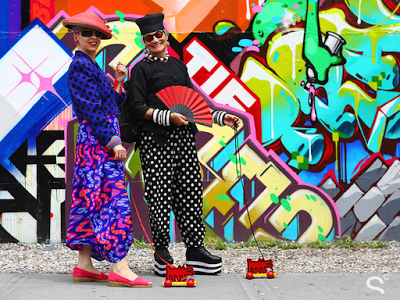 This is the photo that was used on the Stylecaster site.  To see Jean and Valerie's post about the photo shoot, go here.

Blog subject update!   In May 2012, I posted the photo below of a stylish young man I met on the bus, whose mother happened to be a fan of my blog.  Connor, the man in the photo, moved to Toronto this year to attend Randolph Academy of Performing Arts for Musical Theatre, and back in April, he was attending Fashion Art Toronto, and was asked to walk in the show for one of the designers. 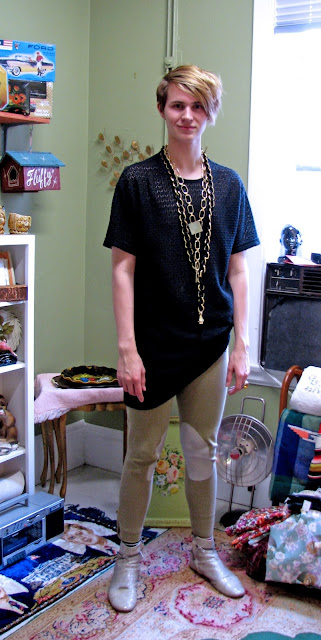 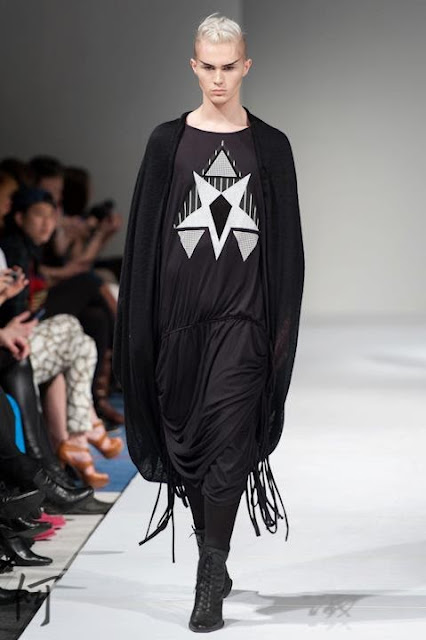 Connor's Mom forwarded me this photo of her son walking the runway at Fashion Art Toronto.  I noticed his photo on TorontoVerve, a popular Toronto Street Style blog.  I think he's found his tribe (which some of us don't do til much later in life) and I'm very happy for him!

So, on to some cool stuff I saw on my Saturday walkabout.... 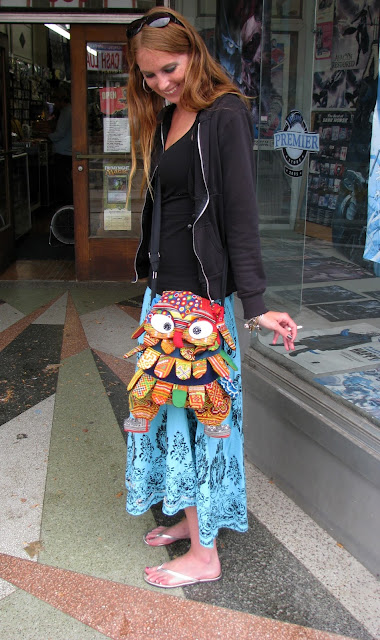 I was headed to my bus stop and saw this woman and her crazy-cool shoulder bag that she found in a little store in Massachusetts (I think that's where she said).  It could be an owl, dressed as a Samurai Warrior? 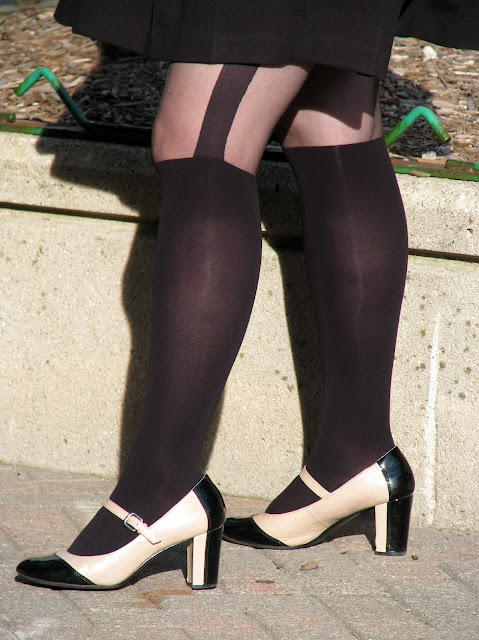 I may have shot this on Friday, but no matter.  The shoes are so pretty, and I think I need to find me a pair of tights like these 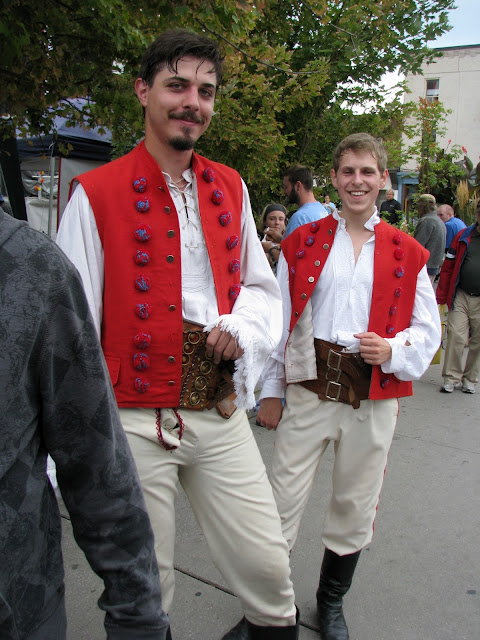 The Polish Festival was on at the Covent Garden Market downtown, and I snapped a quick shot (apologies to the guy with his eyes closed - I only got one shot) of these guys in their traditional Polish costumes while I was waiting in line to get these 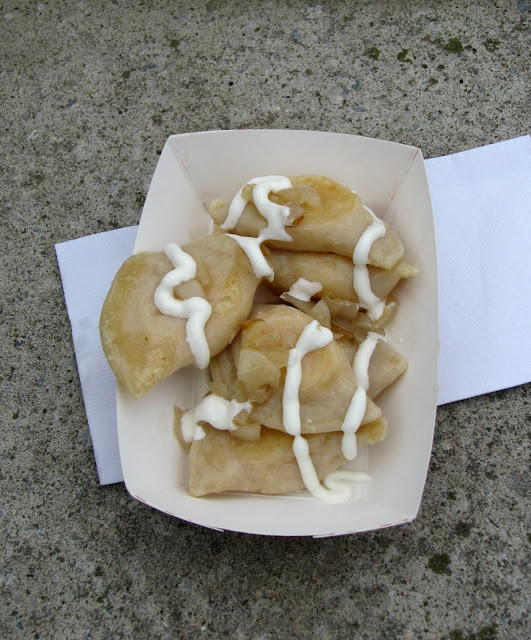 What would a Polish Festival be without Perogies?  They were yummy, by the way 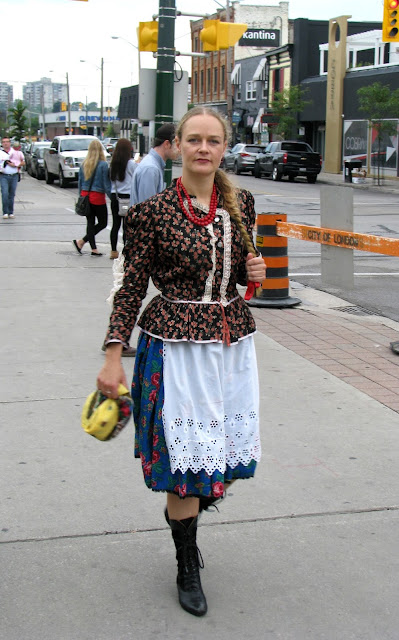 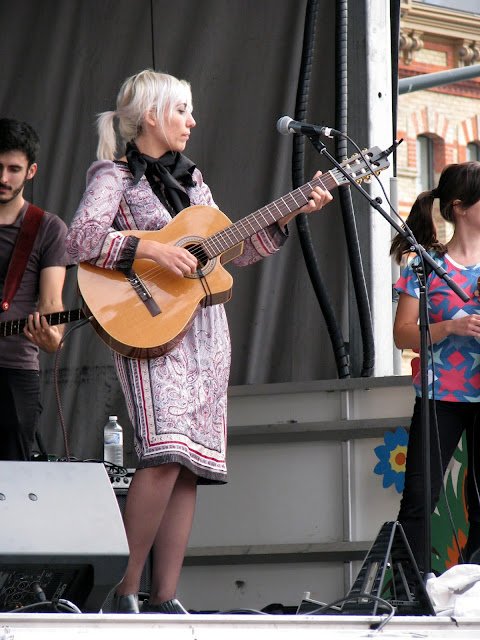 Alex, (playing guitar) and her band, Olenka and the Autumn Lovers, played at the Festival.  I've always liked that when Alex performs, she dresses against society's idea of what a woman fronting a band should look like. 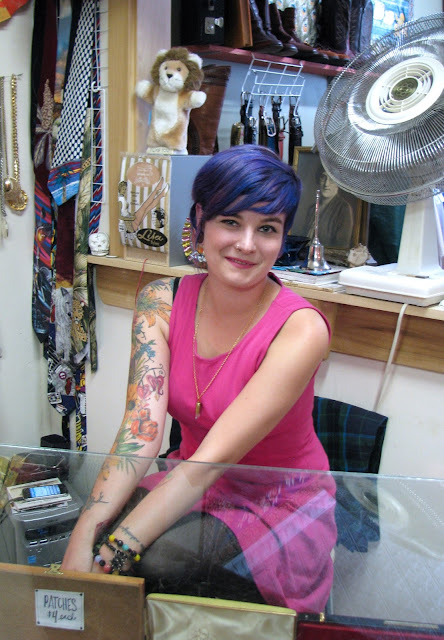 I stopped by The Sentimentalist and to my delight, Sarah Lambert was working.  She is the author of the blog The Laughing Medusa, which is the only other London-based blog I follow regularly, and I had photographed her for my blog last year before I knew who she was.   She's moving to the UK at the end of September and I was hoping to have an opportunity to talk to her before she left.  She is a charming, creative, and very articulate young woman and our loss is the other London's gain. 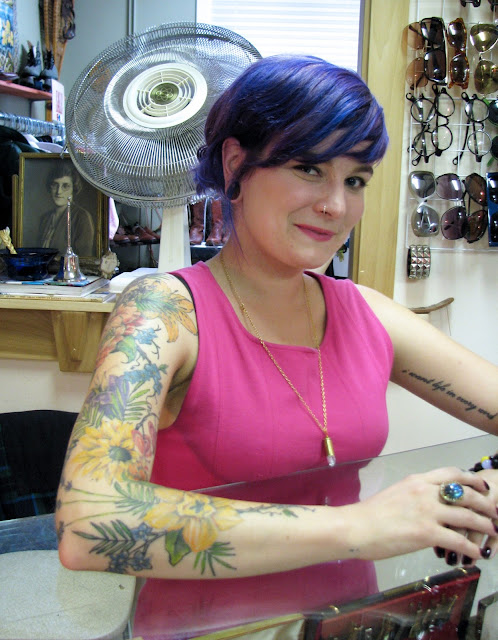 I love her flower tattoo sleeve - it reminds me of watercolour depictions of flowers found in old botany books. 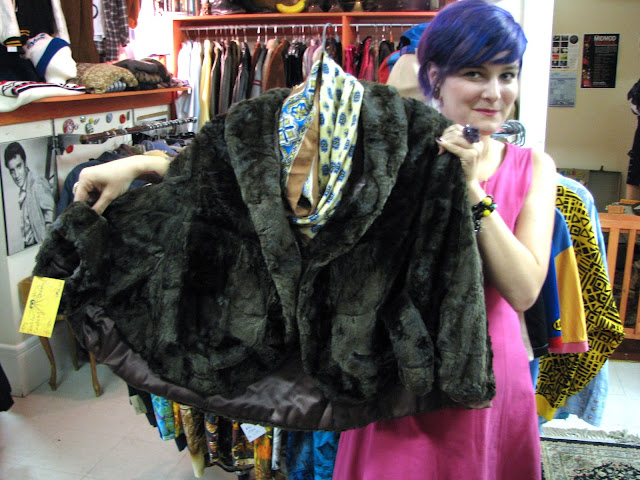 We were expressing our mutual adoration of some of the items in the store - this 1940's chinchilla cape being one of them.  I asked Sarah to hold it up so that you could see the armholes and the curved hem.

Definitely a full day!   I also saw a film that affected me so deeply it deserves its own blog post which I will get to in a few days.  Yikes, how can it be Sunday night ALREADY??  Must go watch the latest episode of Breaking Bad...