There's been quite a number of posts made recently within my blogging circles about what it means to be"Sexy" -  what the media and society says is sexy vs. what being sexy means to us (women over 40).  A number of my favourite bloggers have tackled this topic with wit, insight and surprising candor - read  Melanie's take on what's sexy, inspired by Bella's post on playing pin-up, Vix's reflections on youth vs. maturity, Curtis' smart and sassy take on what being sexy means to her, Tamera's thoughts about fake boobs and tans vs. brains and confidence, and Desiree's words about casting off body image hangups.  Trust me, you'll feel better about yourself and you'll want to hug these women.

I was late to the party (as usual), so have nothing new or particularly insightful to add to the discussion, but I was inspired by my blogger sisters' posts to document an outfit I wore that made me feel sassy, confident and playful, which can all be considered elements of "Sexy". 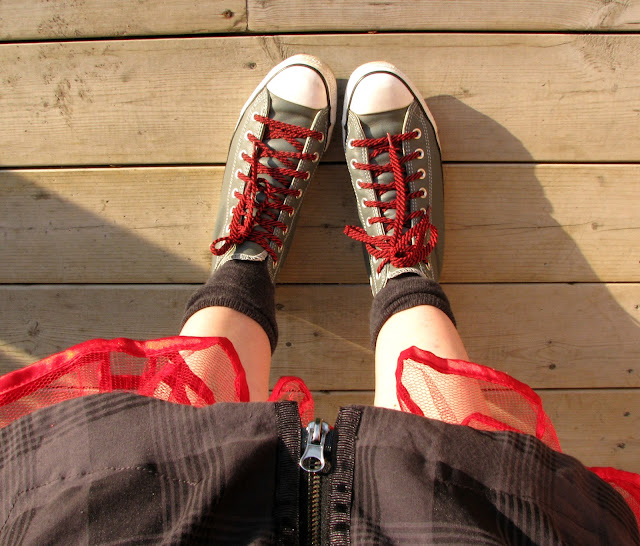 I'm tired of hearing the word "Sexy" used in contexts where it's obviously being used as a synonym for "attractive", which it is not.  Some people who may not be considered "beautiful" or "attractive" in any conventional way can be devastatingly sexy (consider Rossy de Palma, who has starred in many of Pedro Almodovar's films).  Context is everything, and sexy is in your head.   If I'm getting up close and personal with someone I've got the hots for, or performing in a Burlesque Show (which I did once), then yes, I want to feel sexy and hopefully be considered so by my audience.   I don't want, or need, to feel sexy when I'm at work, or at the grocery store, or doing my dishes.  However, I do like feeling that I'm putting the best possible "me" out there, which means wearing something that makes me happy.  Cue the Crinolines and Cons... 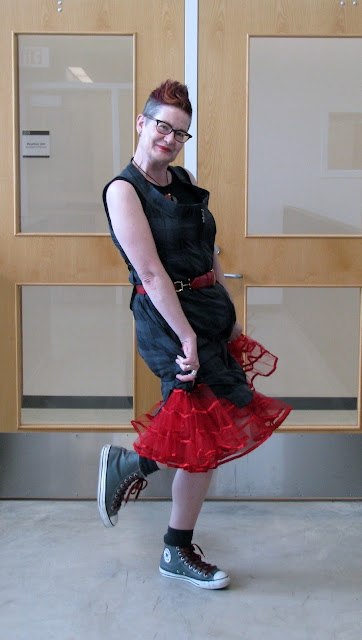 This dress/vest was one of the best clothing investments I've made.  It was expensive, but the shape makes it a great layering piece that adds some "funk" to whatever it's paired with and I've worn it all year round.  Zip it up the front, add a t-shirt, belt, a frilly underskirt, and some fun accessories and I am kicking up my heels.
vest/dress - Akela Key purchased at From Mars
crinoline - Frilly Lizard (retail)
leather Converse - From Mars 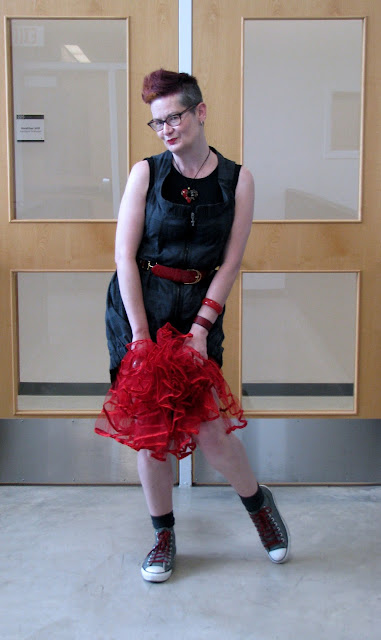 The ribbon and tulle inspired a Can-Can moment 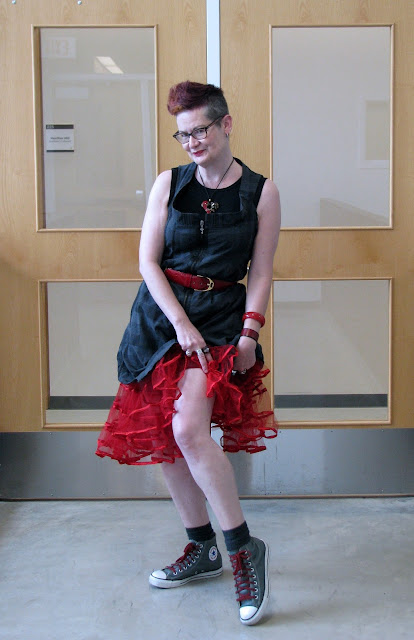 that included a bit of saucy leg-baring
(Photos by Heather) 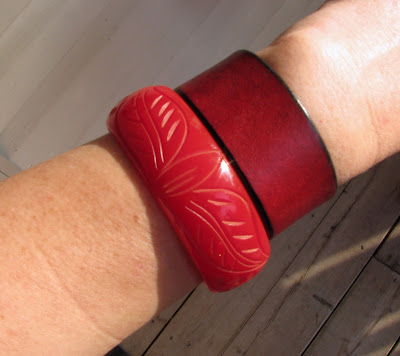 ....and speaking of accessories (we weren't, but no matter), I was very excited to acquire my first piece of Bakelite jewellery - this carved red bracelet!  I have wanted a bakelite bangle for some time, preferably red, and when I saw a photo of this one on the Facebook page for Phantastica, my heart leapt!  It was very reasonably priced, so now it lives with me.

An interesting thing happened when I was on my way home from work wearing this outfit.  I was waiting for my bus, and a man who looked like he was in his mid-thirties approached me to ask where I had purchased my Converse.   He then asked if I had been a "Punk" back in the day, which lead to a very entertaining conversation about Punk Rock, Lou Reed and The Velvet Underground, and, to my amazement, Kitsch!  He had been reading an article that mentioned someone having a collection of Kitsch, and he thought he knew what it meant, but asked if I would define it for him.  Definitely one of the coolest conversations I've ever had with someone I met at a bus stop.  We got on the same bus, and just before he departed, we exchanged first names, he shook my hand, and  expressed an admiration for my outfit and my style.  I'm thinking he was responding to the positive energy that comes from mixing Crinolines and Cons!
Posted by Forest City Fashionista at 9:35 PM