Last weekend, the summer festival season here kicked off with Sunfest, our annual 4-day celebration of world music, food, and arts and crafts.  It is my favourite festival and I try not to schedule anything that keeps me from spending the entire weekend in Victoria Park, sitting on the grass and listening to a band from Chile, Ghana, Cuba or China.  This year, I had just got home from Montreal on Friday night, so I was already behind in my festing.  Most of Saturday was spent in the park, but then the on-and-off rain of Sunday kept me away until the evening.  With a few exceptions, the food and craft vendors tend to be the same from year to year, so it's the bands that I am most excited about.  While I saw fewer than usual this year, there were definitely ones that made an impression. 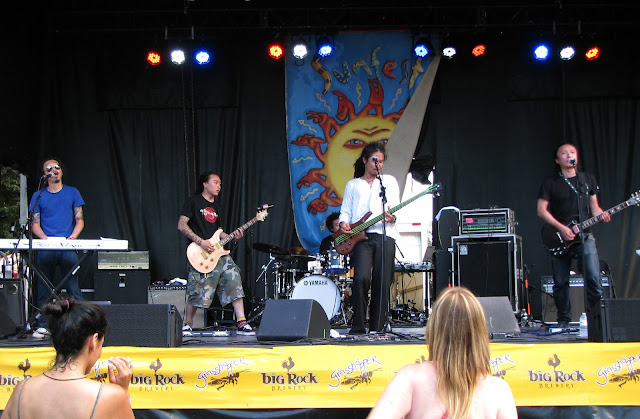 The first band I saw on Saturday was Long Shen Dao (which translates to "The Way of the Dragon God), who I had missed seeing perform at Luminato in Toronto.  The band, from Beijing, China, embody the spirit of what Sunfest is all about - a mixing of cultures that results in something that is greater than the sum of its parts.  The band's musical core is Reggae, and they incorporates some traditional chinese instruments like the guzheng (zither) into their music, which adds an interesting Asian vibe to the loping reggae rhythms.  Is what they play authentic Reggae?  I'm no expert in Reggae music so I can't say, but I'm sure the band inspires some heated discussions about the validity of Chinese musicians playing Reggae music, which is traditionally linked to its religious foundations in Rastafarianism.  The lead singer of the band, Guo Jian, has stated that although some band members wear dreadlocks, the members of the band are not Rastafarians, but they feel that Reggae music is a like a "warm breeze" and can be appreciated by people regardless of the culture they are from.  The crowd liked them and people were dancing, which is one of the best things about Sunfest, and one of the reasons I go every year. 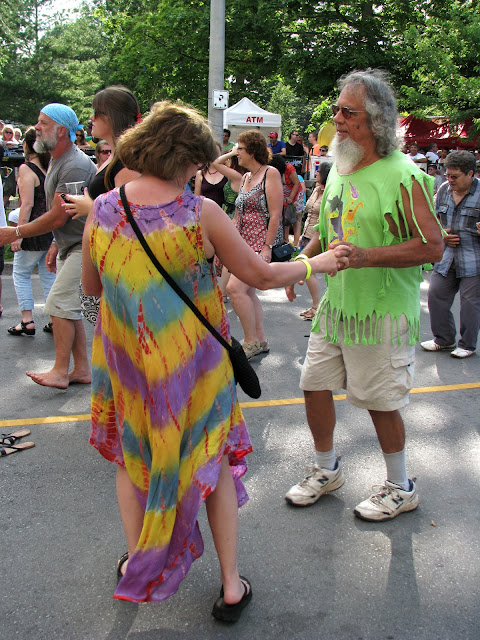 This couple had their Sunfest groove on 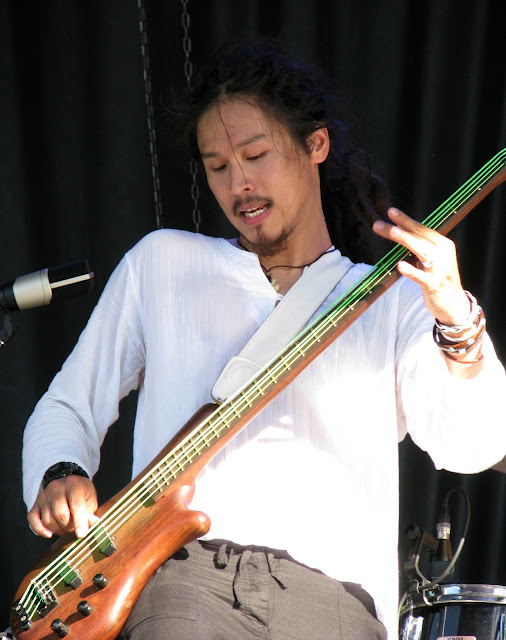 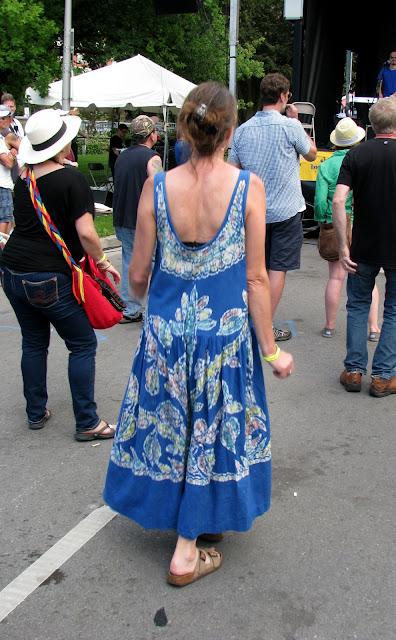 Sunfest seems to inspire Londoners to loosen up and have more fun with their wardrobe, as I always see much more colour over this weekend than than when there is not a festival going on.  I really liked the dress worn by the woman in the photo above. 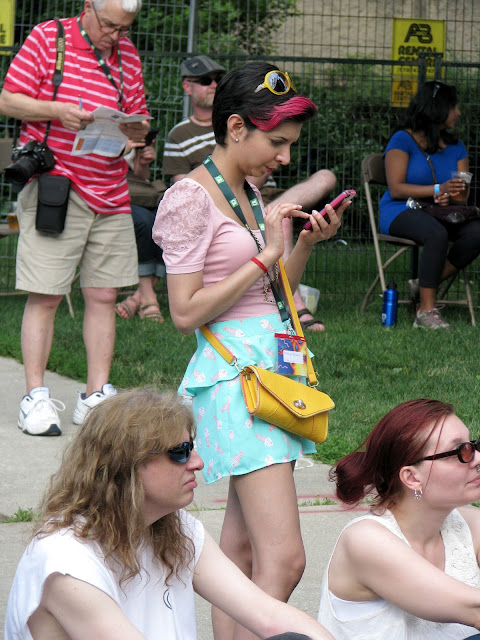 This young woman was rocking the pretty candy colours, but whenever I glanced over at her, she was paying more attention to her phone than the band. 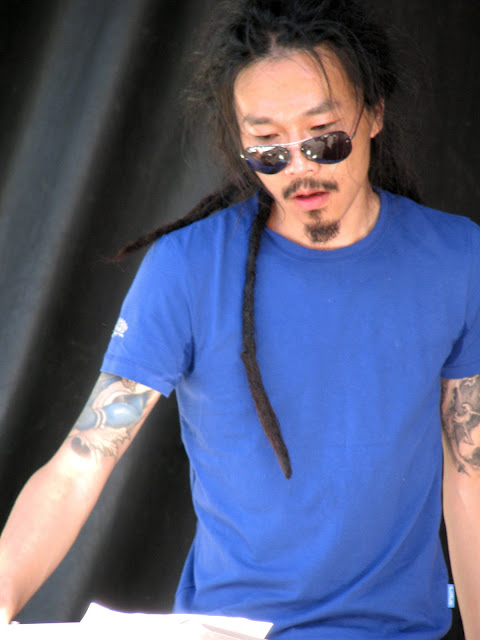 Tats and dreads on the keyboard player 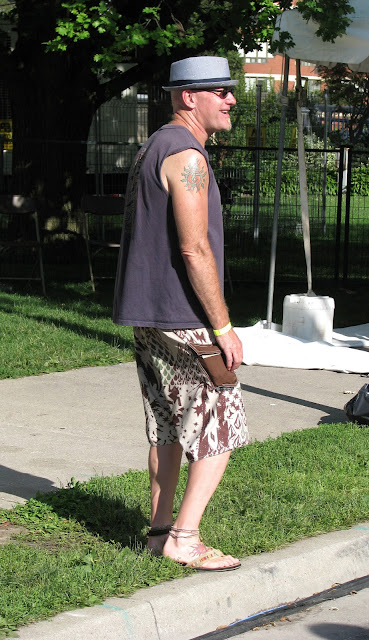 I see this guy at Sunfest every year, wearing a similar version of this outfit 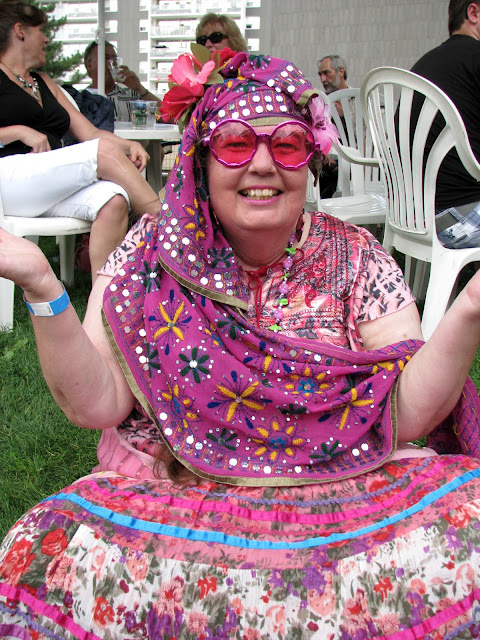 Another Sunfest regular is the inimitable Teresa, reigning Queen of all things Cool, at City Lights Bookshop

It's always interesting to take a stroll through the craft booths at the Festival, as you never know what you might find... 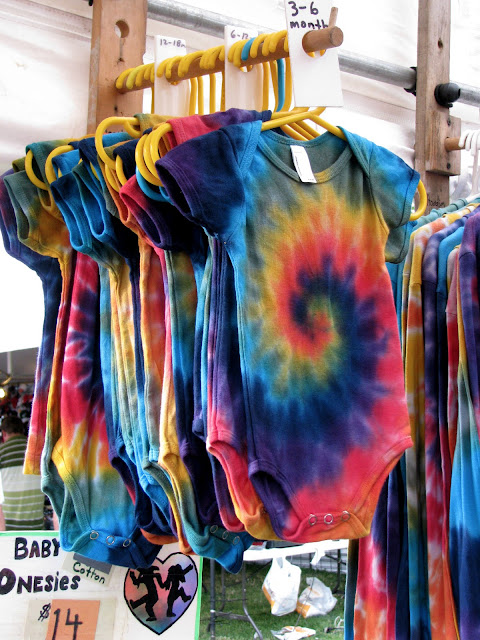 apparently tie-dye never dies, nor does it fade away; it just finds a new generation of fans 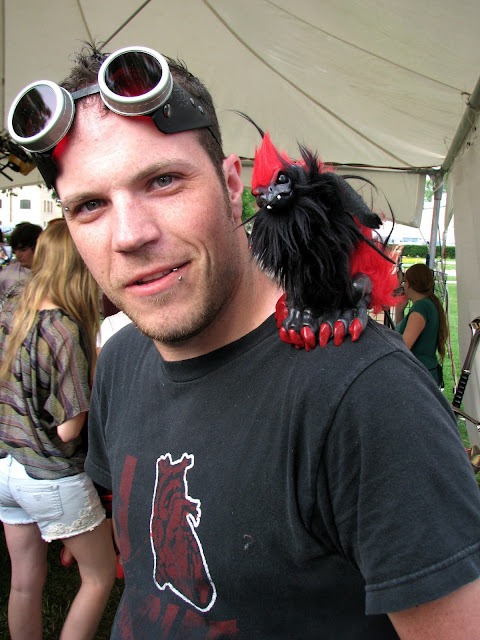 I discovered a booth that had a Steampunk theme going on, with some awesome pocket watches and cool goggles, like those worn by this guy, who was standing outside the booth with his "pet".  He told me the name of his talon-ed and fuzzy friend, but of course, I can't remember it.  However, what was most cool about the critter was that it came alive with a touch of a hidden remote.  I should have got the name of the person that designed the creature as apparently he does custom work.  The "information collection" part of my brain was on vacation that weekend. 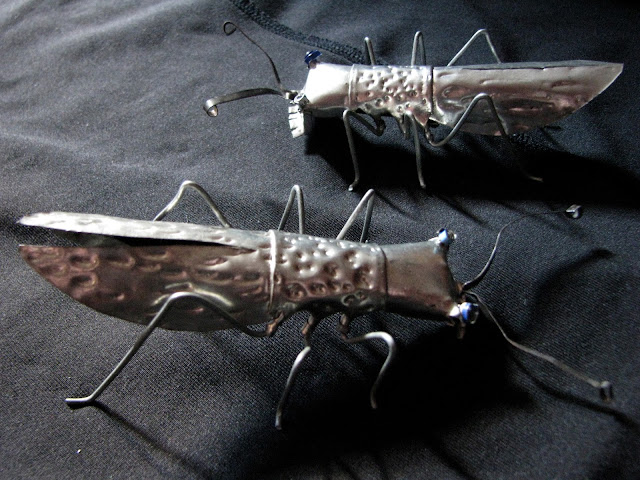 My friend Heather discovered a booth that in addition to sculpture and carvings, also had some small animal skulls for sale .  She took a monkey skull home (which her husband named Pistachio) and I fell in love with these metal insects (they are about 5" from antenna to tail) made from recycled pop cans that were $6 each.  Of course, I forgot to get a business card from the vendor. 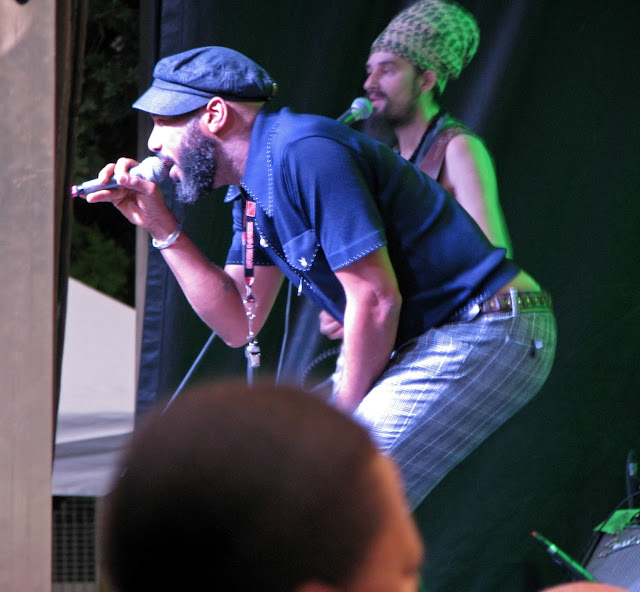 The other band that had me on my feet was Anthony Joseph and the Spasm Band, from the UK.  The man in blue is Anthony Joseph  - Trinidad born, UK-based, poet, novelist, academic and musician. The music is a down and dirty mix of funk, jazz, rock and calypso and is relentlessly danceable.  Mr. Joseph was the smoothest, sexiest man on stage at Sunfest this year.  I welcome anyone who saw him perform to disagree. 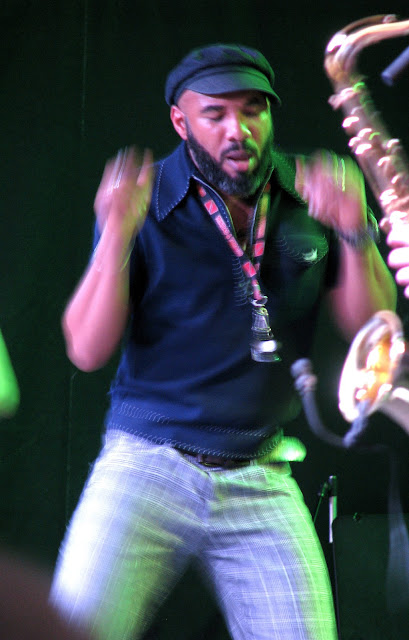 It was difficult to get an in-focus shot of him without using a flash because he didn't stop moving. 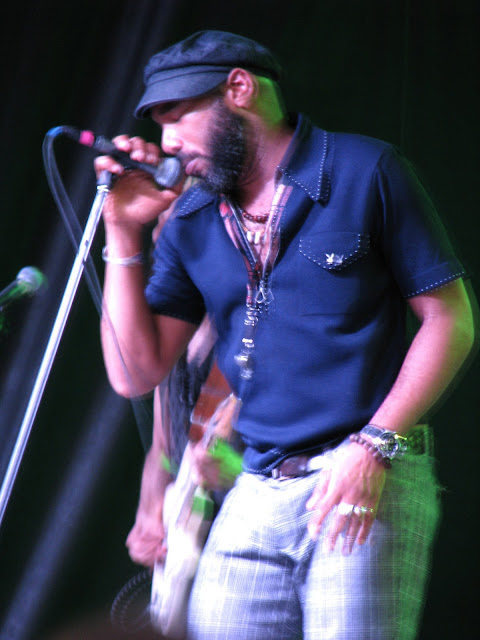 I thought my band groupie days were behind me, but for him, I could make an exception.

Get out and supporty your summer festivals  - it's a short season, and we need all the fun in the sun we can get!
Posted by Forest City Fashionista at 7:18 PM