My apologies for no posts, or comments on your blogs this past week, but I took the opportunity to escape London for a few days.  My destination - Montreal!  I had only ever spent a few hours in this historical city, the largest in the province of Quebec, about 20 years ago, so I was eager to have more time to explore.  One of the reasons I chose Montreal is that the Montreal Museum of Fine Arts was hosting a large exhibition by American glass artist Dale Chihuly, and the other was the chance to meet up with a fellow blogger, the delightful Ariane of Style Sud-Est. 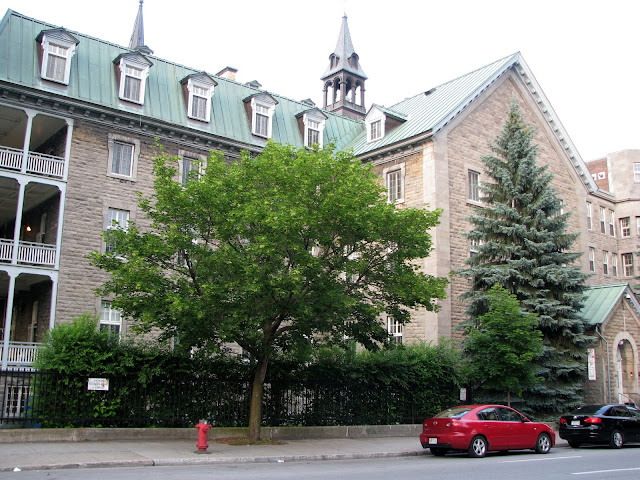 Via Rail Canada had a half price sale on, so my train fare was quite reasonable (it's approximately 7 hours by train to Montreal from London).  In keeping with my plan to make this as inexpensive a trip as possible, I booked a room for $50 a night at the Grey Nun's Residence (see above), part of Concordia University.  The building is located downtown, close to a Metro station and the staff were friendly, the rooms are large, and although you have to share the bathroom with whomever is also staying on your floor, I was fortunate enough to have my floor to myself, so there was no competition for the shower in the morning.  It was very hot and humid when I was there, and unfortunately, the rooms are not air-conditioned, so I had to borrow a fan from the office in order to get any sleep. 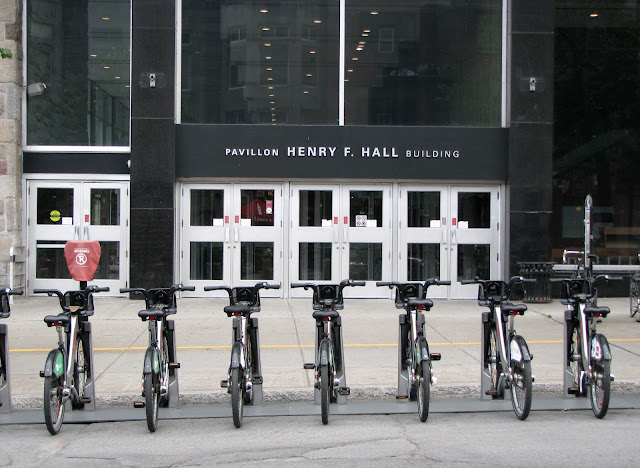 Montreal is very bicycle-friendly; their BIXI Public Bike System established in 2009 was the first in Canada.  I saw bike stations like these all over the city. 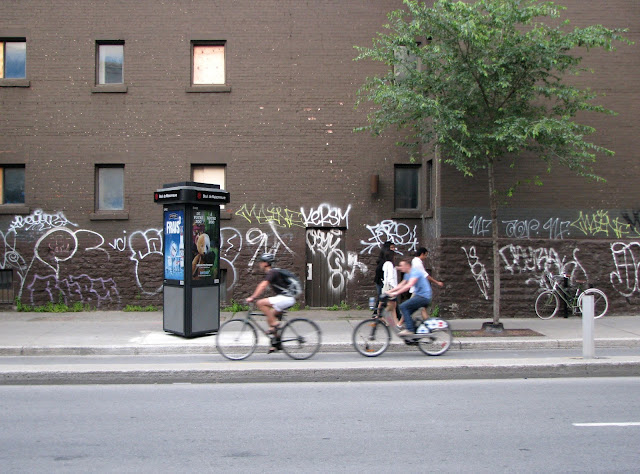 There are many dedicated bicycle lanes in the downtown area.  This photo shows the other element that I noticed is everywhere in the city - graffiti! 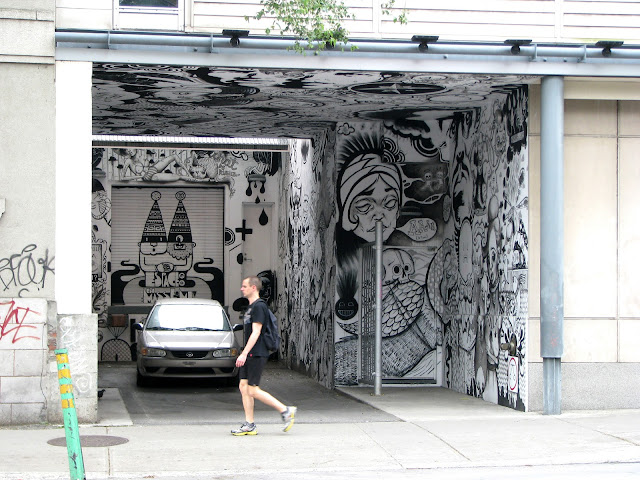 While there's a lot of tags like those seen in the previous photo, covering walls, vehicles, doors, signs and even trees, there is also a lot of cool street art, as seen in this photo.  I saw this artist's work in other areas of the city. 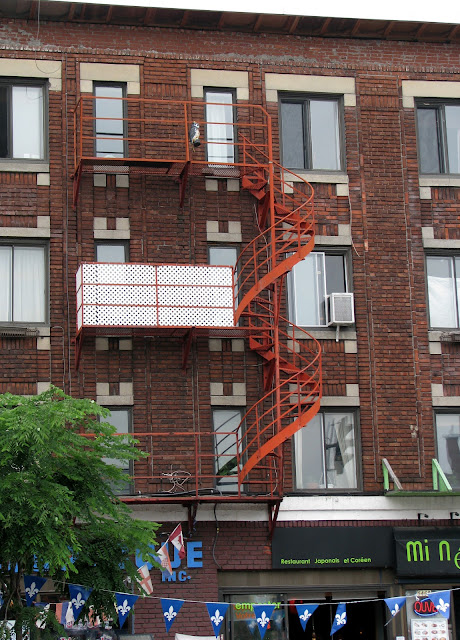 The one thing I did remember from my long-ago visit to Montreal was the prevalence of iron work balconys and staircases. 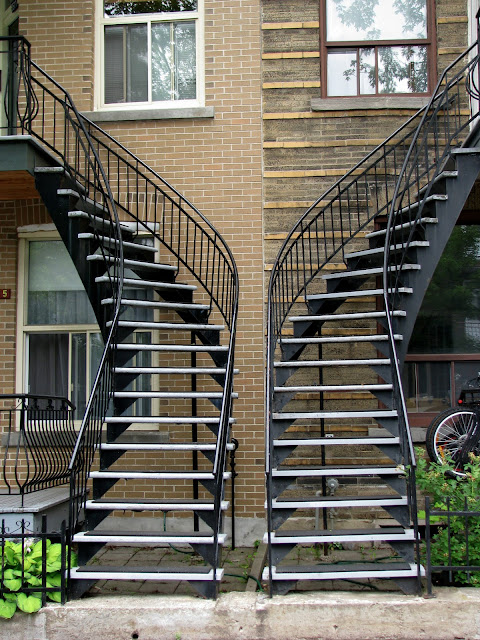 Can you imagine having to move furniture up and down stairs like these?  These are pretty tame compared to some of the spiral staircases I saw. 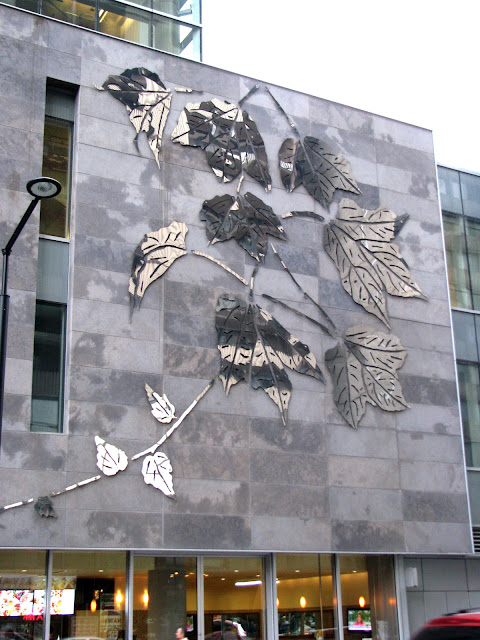 One of the more modern buildings on Boulevard De Maisonneuve 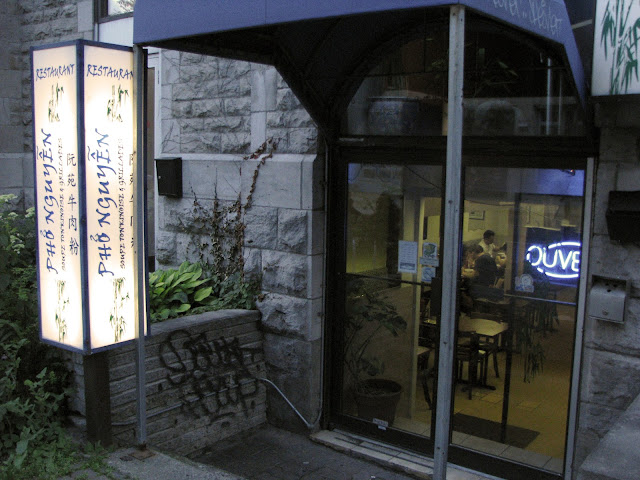 Montreal is full of restaurants offering every kind of food you can imagine.  On my first night there I discovered this little Vietnamese place not far from the Residence where I was able to have a tasty and satisfying meal for around $10.  I had dinner there again on my last night in the city. 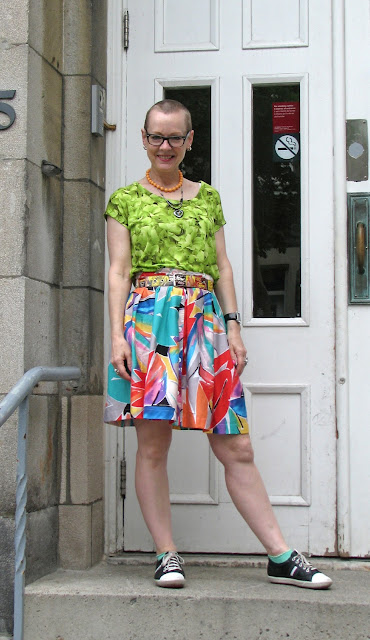 On the second day, I met Ariane, who was wearing her trademark bright colours, for breakfast and a visit to some of her favourite neighbourhoods.  There was no surprises here (other than she's shorter than I imagined) - she was warm and funny, thoughtful, and doesn't take herself too seriously, which meant that some blogger silliness ensued. 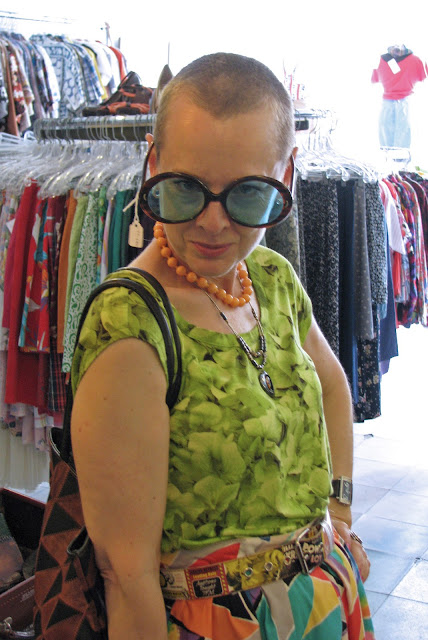 Ariane, doing her best Iris Apfel imitation, in a pair of glasses at one of the secondhand stores in the neighbourhood known as Mile End, home to writers, artists, musicians and filmmakers.  The neighbourhood is featured in a number of novels by Canadian writer Mordecai Richler.

We stopped at the Arterie, a vintage clothing store that had the most adorable resident cat, Hazel, who was up for adoption.  I wanted to take Hazel home with me, but given the logistics of transportation, and the fact that bringing home a new pet may not have gone over so well with the one I already have, I regretfully left her there.  You can see a photo of her stubby-tailed self on Ariane's post about our day here.  You can also see a photo of what I was wearing, as I didn't think to ask someone to take a photo of both of us. 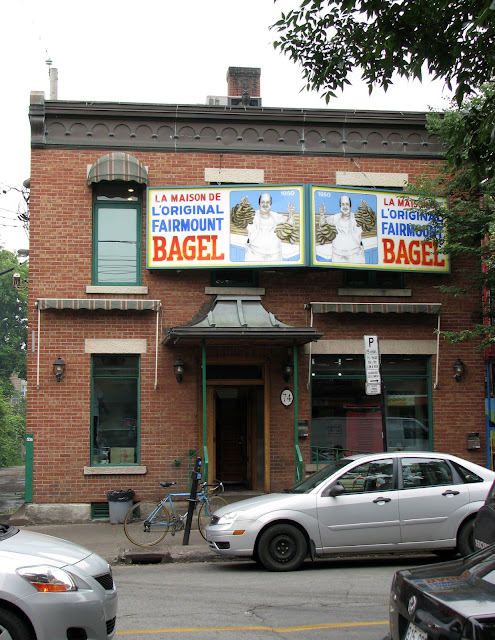 I picked up a couple of the deliciously chewy bagels that Montreal is famous for from one of the two most famous bagel bakeries, Fairmount Bagel.  The other, St. Viateur Bagel, is also located in the Mile End neighbourhood. 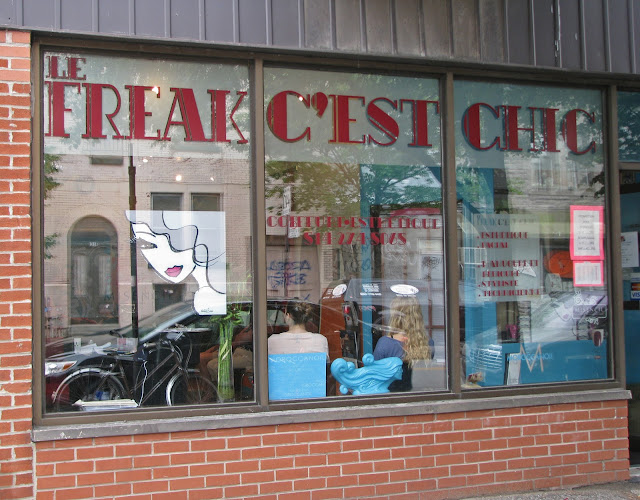 This would be the place I'd go if I wanted a haircut! 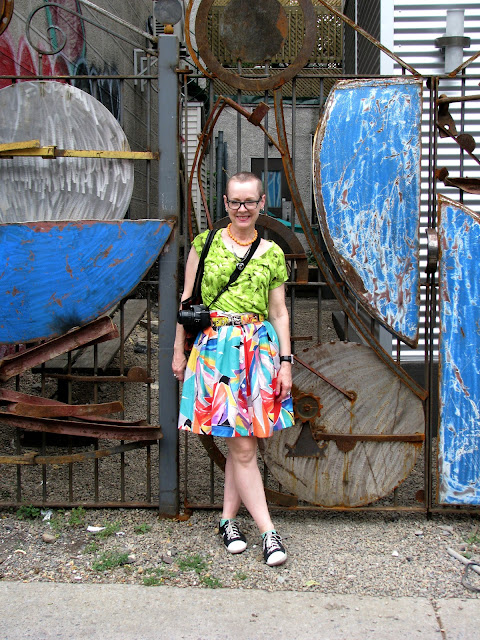 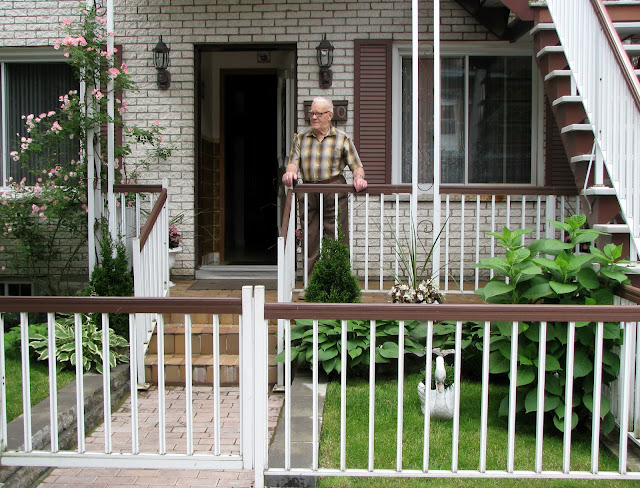 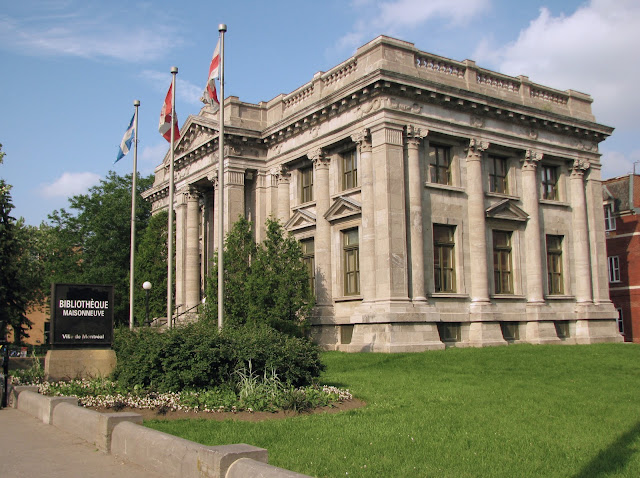 This impressive stone building is the Maisonneuve branch library 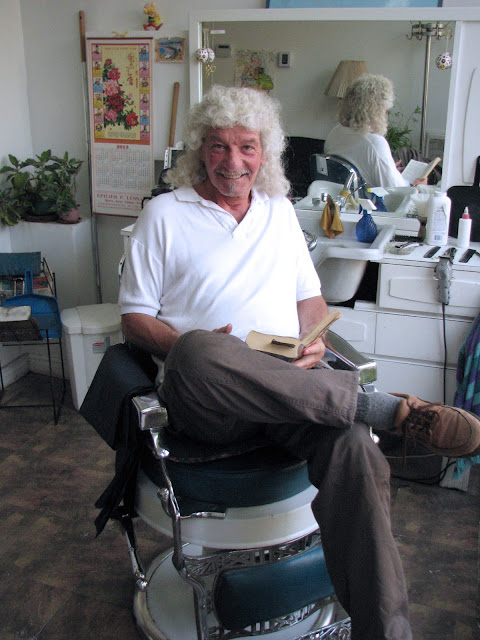 By late afternoon, we decided to head to Ariane's neighbourhood, and we passed by a little barbershop where the owner was visible through the front window reading a book in his chair.   Doesn't he have the most marvelous hair?  If he was wearing a frock coat, knickers, and stockings he could be straight out of the 17th century. 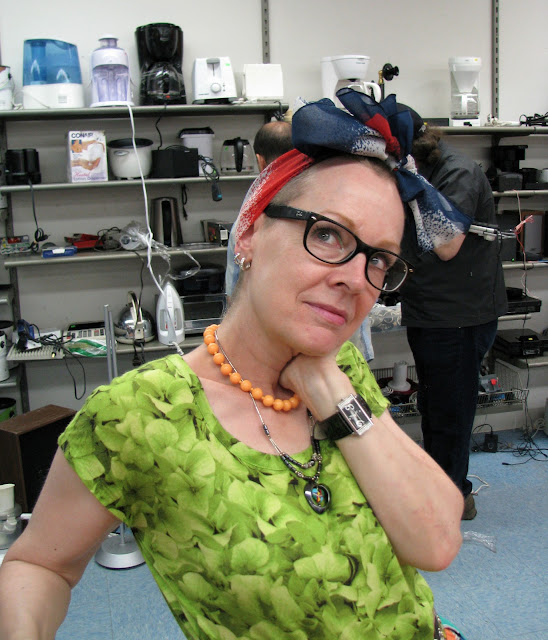 Ariane took me to the Renaissance Store in her neighbourhood, where she has scored many an excellent find that has appeared on her blog.  I tried a number of things on, but aside from the scarf that Ariane is modelling above,  I didn't buy anything. 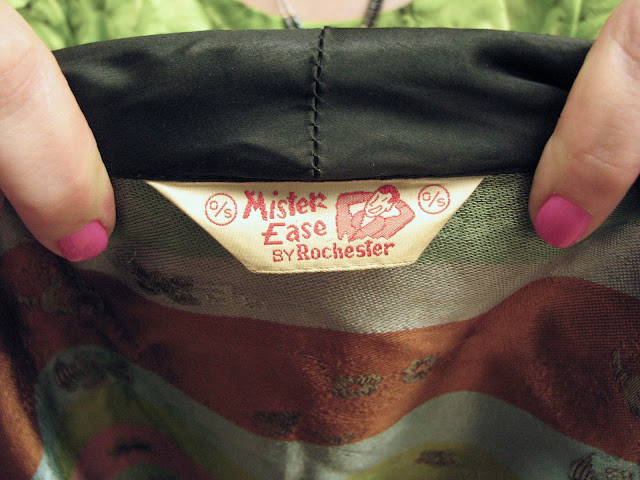 I did appreciate the label inside this Asian-style lounge robe 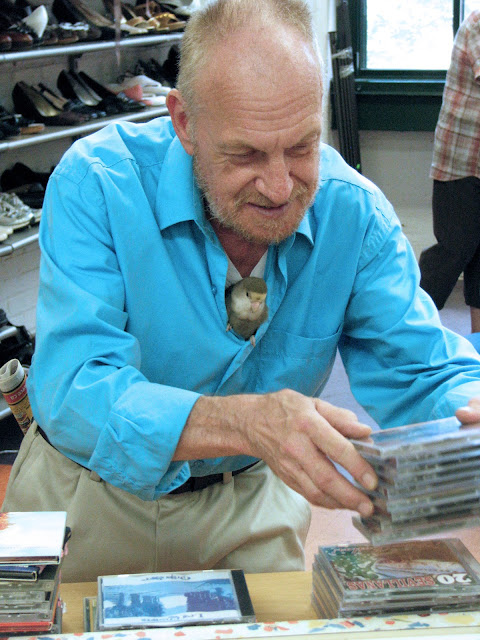 At the cash desk we saw this man and his feathered friend (whose name translated to "big baby").  There's no way I could ever take Fred out and about like this - she'd be gone in a minute! 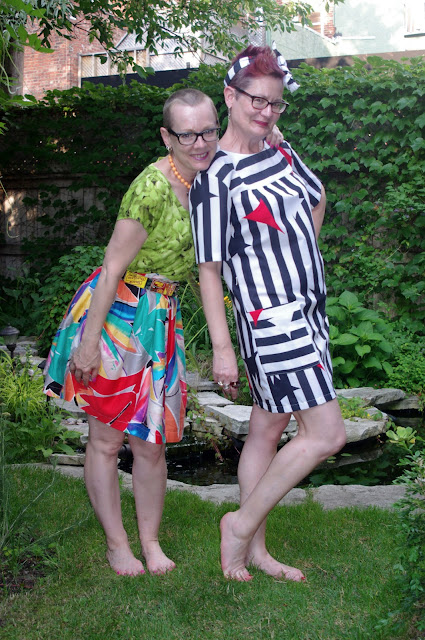 Ariane invited me back to her home, where we entertained her neighbours with a blogger photo shoot in her back yard (photo above is courtesy of Ariane - you can see more on her blog), followed by a delicious meal made by Ariane and Mr. D.    Many thanks to Ariane for being an excellent tour guide and a wonderful host.    My next post will feature the breath-taking art of Dale Chihuly.
Posted by Forest City Fashionista at 4:46 PM