Naked cyclists, Candy-coloured Docs and Laurie Anderson - What a Weekend!

This is another one of those seemingly endless posts that may require reading with a coffee or a cocktail.  Don't say I didn't warn you.


I spent last weekend in Toronto, visiting friends and attending some of the music events that were part of the Luminato Festival, which continues this weekend.  I consider myself very lucky to live only a two hour drive from a city that is host to festivals, concerts, and other cultural events featuring world renowned artists.    Many times I have been there for a visit only to discover that something interesting was going on that was completely off my radar.  Case in point - after arriving in Toronto on Saturday afternoon, I was walking through Nathan Phillips Square, and imagine my surprise when I came upon this.... 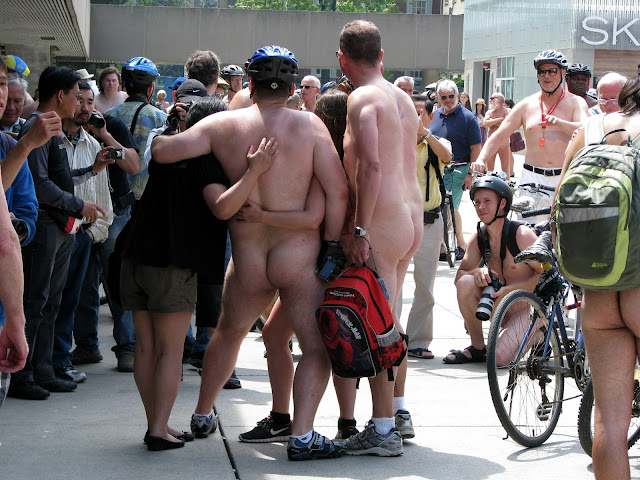 I had stumbled upon the participants in this year's World Naked Bike Ride, a global event that began in 2004, in protest of car and oil dependency.    I chatted to a couple of the guys who were joining the ride to find out what it was all about, and discovered it was somewhat less awkward than one might imagine to carry on a conversation with a naked man (aside from helmet and shoes) that I didn't  know, in a public setting.  Most of the participants were male (one guy said he thought that was because women had more body issues), of various ages and body shapes, and many had participated in previous rides. 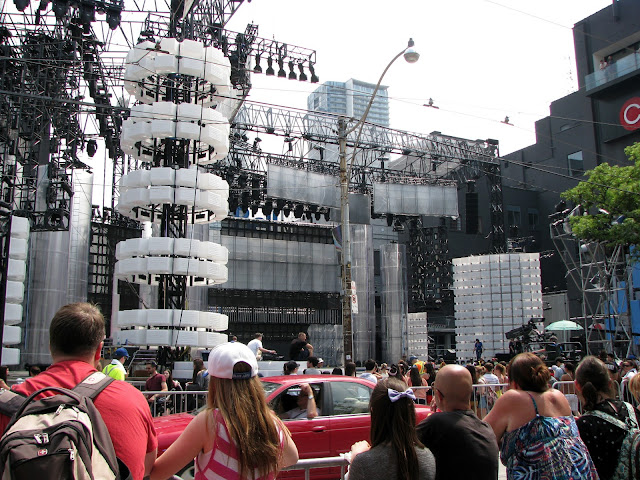 My original plans to head to Trinity Bellwoods Park to participate in an interactive art installation were thwarted by street closures and time constraints, so I did what every shoe-obsessed woman with time on her hands on Queen West would do.... 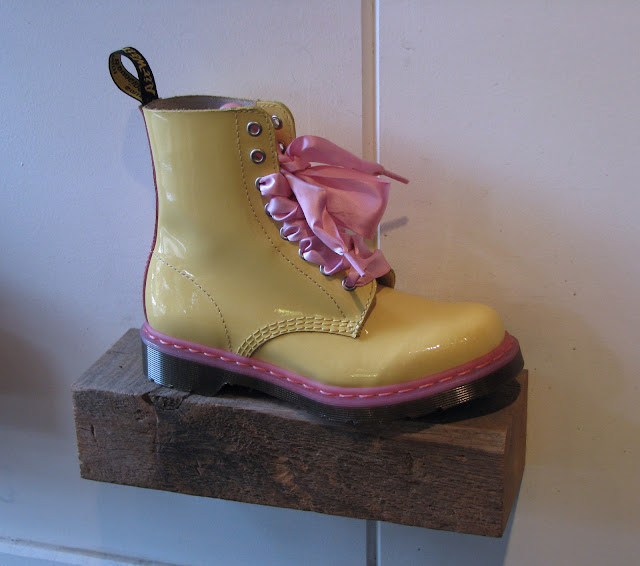 I stopped by the Doc Marten store to ogle the latest arrivals!   I was just in the door and I saw these... 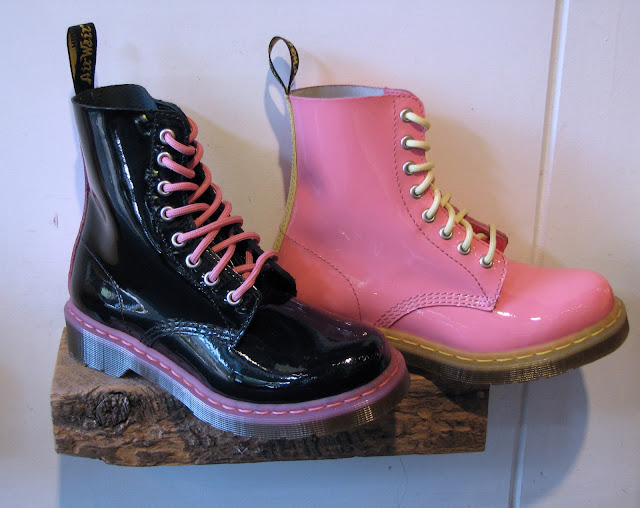 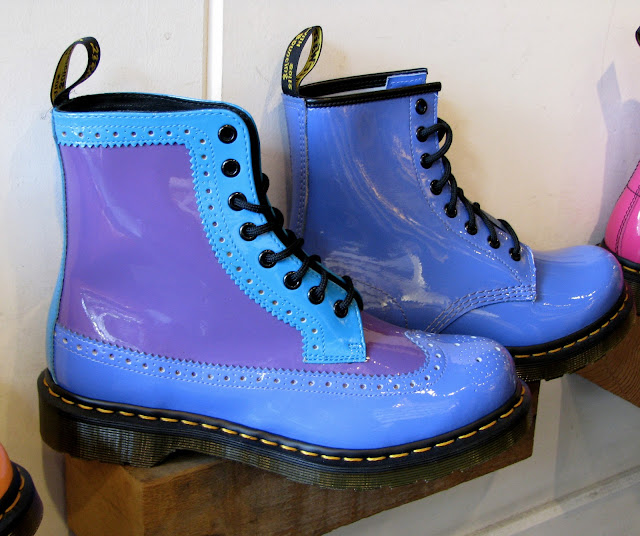 ...and these, which also come in the same orange/pink/yellow combination as my brogues.  To my sadness, and relief, the 8-hole docs don't fit me well as I am between sizes, so I resisted trying them on, but that doesn't mean I couldn't drool a little.  I tried a pair of the spiked silver sandals from their summer line but they cut into my bunions, so no new Docs this trip.  I did find a pair of red leather converse (on sale!) just up the street at Get Outside, which I had been wanting for ages as my grey ones need a break, so that softened the blow.  I also found something cute at Kind Exchange where you can sell, trade, or donate your clothing and accessories which I will show on my blog later.

Shopping done, I went to meet my friend Judy for dinner, and then off to the late night concert by the Toronto Symphony Orchestra at Roy Thomson Hall. 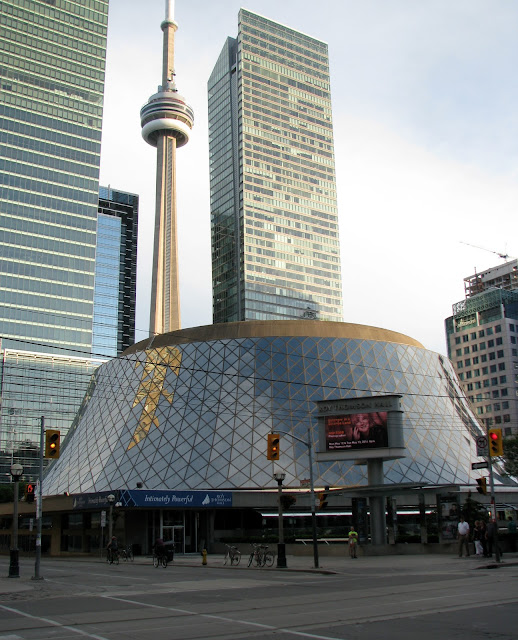 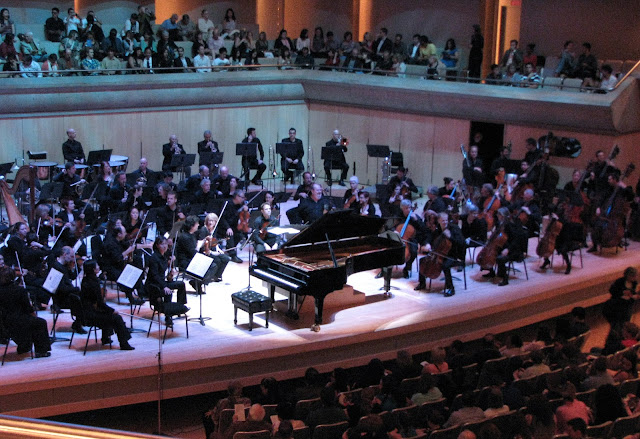 We had amazing seats, and viewing the orchestra from above provided and opportunity to see instruments like the triangle, tambourine and cymbals at the rear of the orchestra that were used in the second piece of the concert, Rimsky-Korsakov's Scheherazade 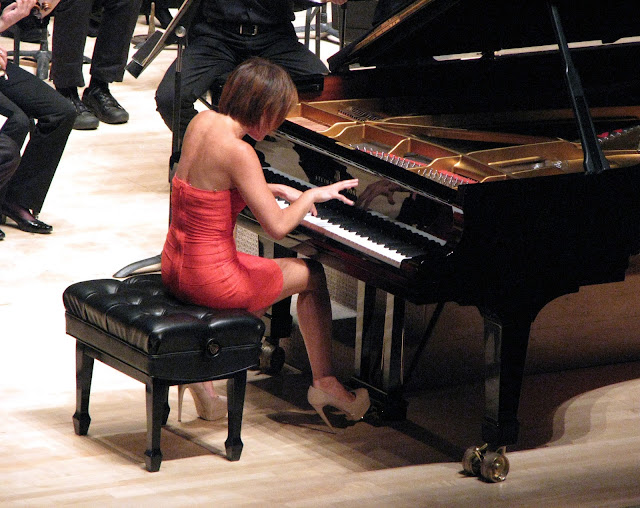 One of the highlights of the evening was the opportunity to hear world-renowned pianist, Yuja Wang, perform the first movement of Tchaikovsky's Piano Concerto No. 1.  I am no expert on classical music but the 24 year-old artist is a brilliant performer....and totally adorable in her orange dress and skyscraper heels. 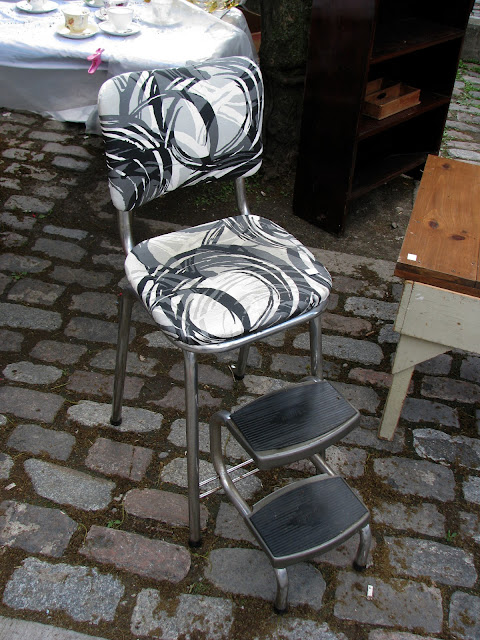 On Sunday, I met up with another friend and we strolled over to the St. Lawrence Market for their regular Sunday Antique Market.  I really wanted to bring home this little chair with fold up steps - my grandmother had a yellow one in her kitchen that I always sat on when I was a little girl. 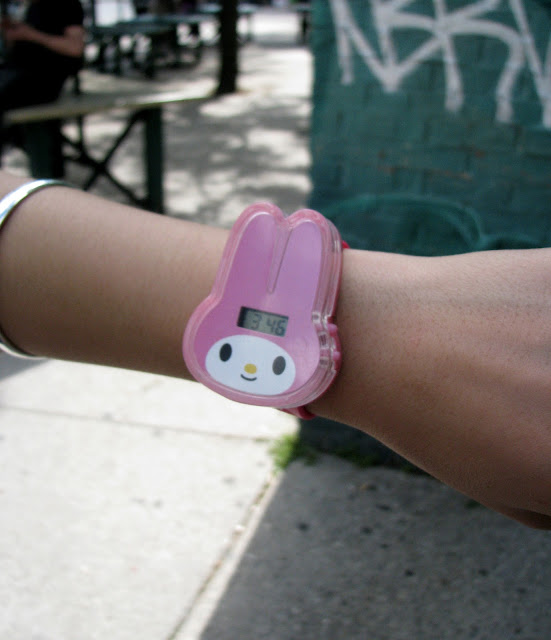 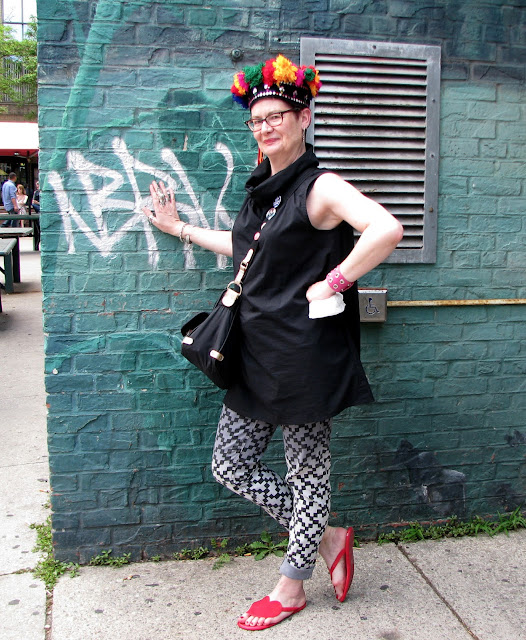 Of course I bought something - it's me, remember?  There was a guy selling a bunch of hats a friend  had collected on his travels around the world, and somehow this one ended up on my head, and then in my bag.  There was much debate about its origins - Tibet, Eastern Europe, Africa, were all suggested.  It has a star shape stitched on the top in bright coloured thread and sequins. 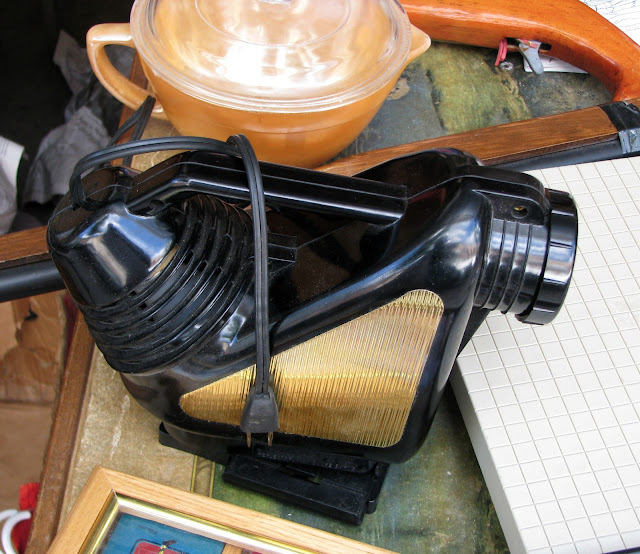 I had one of these projectors when I was a kid and spent many happy hours projecting pictures from books and magazines onto the empty walls in our hallway and tracing them onto paper. 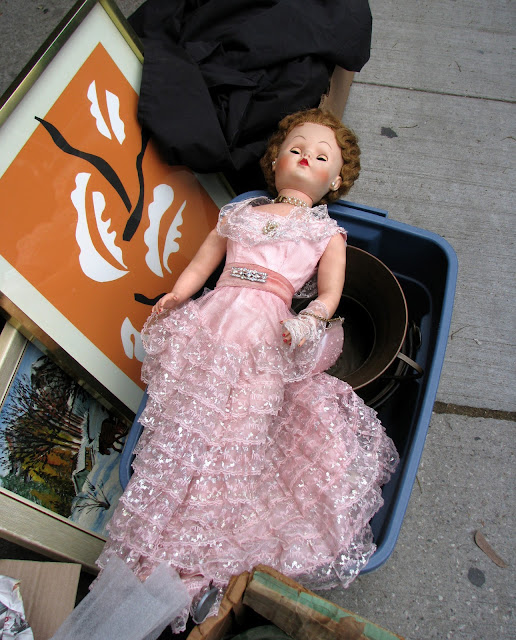 I'm not a fan of dolls like this (I do have a collection of quirky dolls from other countries) but the dress and jewellery on this one caught my attention.

After dinner I headed over to The Hub, which was the outdoor stage setup at David Pecaut Square 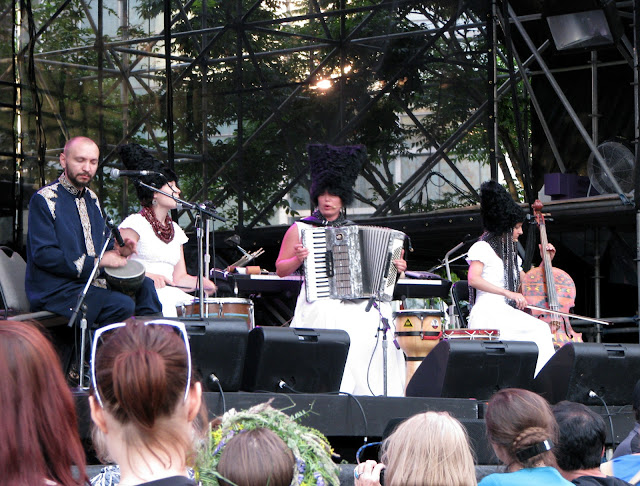 I arrived in time to see a Kyiv-based quartet, DakhaBrakha, whose members experiment with traditional Ukranian folk music, and add elements of Indian, Arabic, Russian, African and Australian instrumentation.  The audience loved them, and I was particularly entranced by the tall furry hats and elaborate necklaces worn by the women. 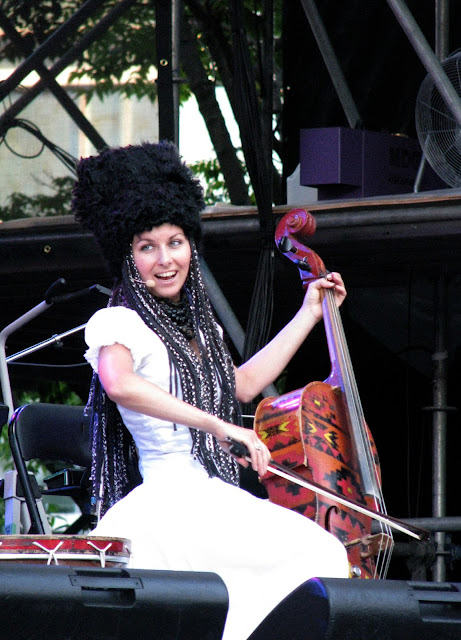 Band member Nina Garenetska is a self-taught cellist with a marvelous voice, and I loved her hair, and her painted cello 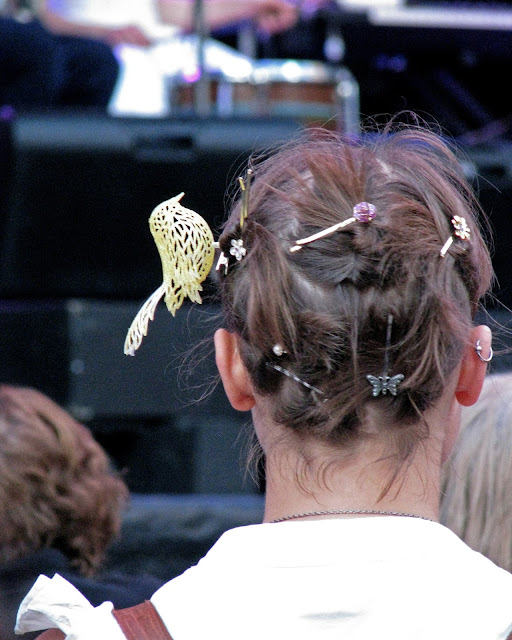 There were also some photo-worthy hair adornments in the audience 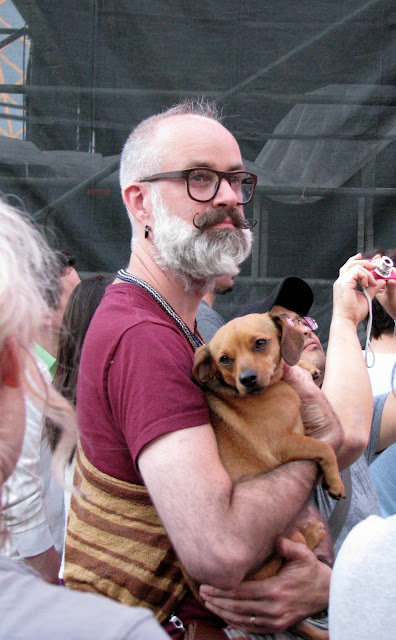 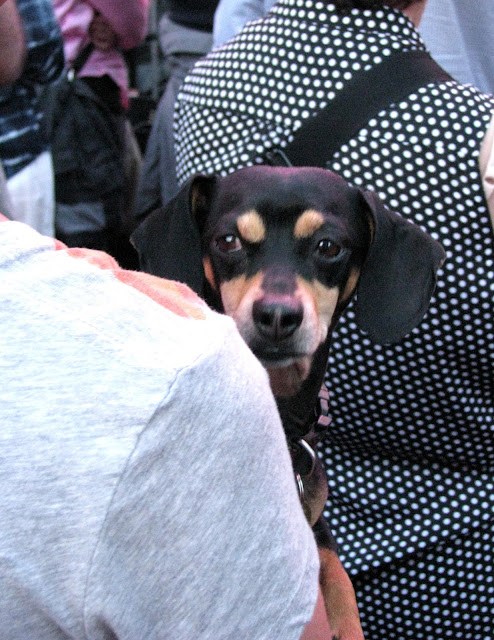 Nigel, in the photo above, was at the concert with his owners, who also owned the dog in the previous photo.  They were standing directly in front of me, and after noticing me fawning over Nigel who is a mix of Chihuahua and Dachshund, I was asked if I wanted to hold him for a while.   How could I say no? 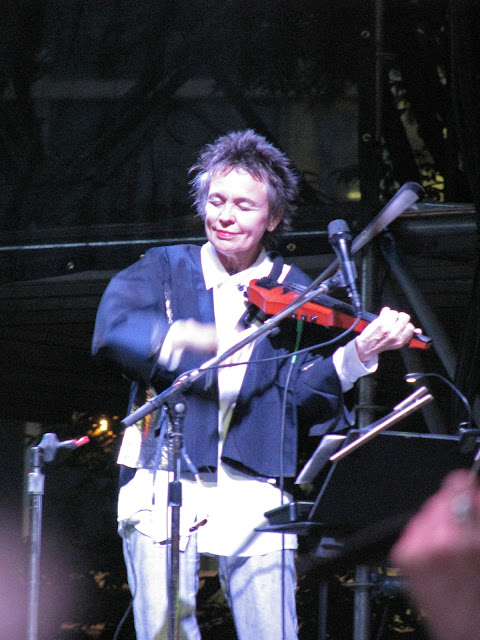 Finally, it was time for Laurie Anderson to perform.  The experimental performance artist/musician was backed by a band and joined by Chinese artist Ai Weiwei by Skype for a dual rant about their respective countries, a piece titled "Greetings from the Motherland". 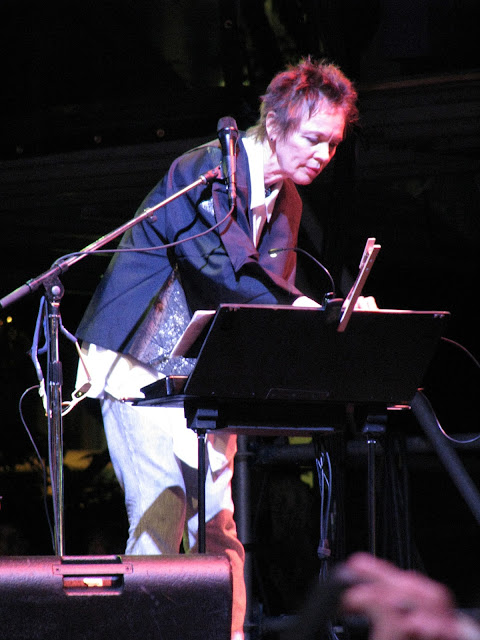 I have been a fan of Anderson's work since I first heard "O Superman" back in the early 80's.  Even though she did not perform any of her earlier pieces at the Luminato Concert, I was thrilled just to see her performing live on a stage in front of me.  And for free, no less. 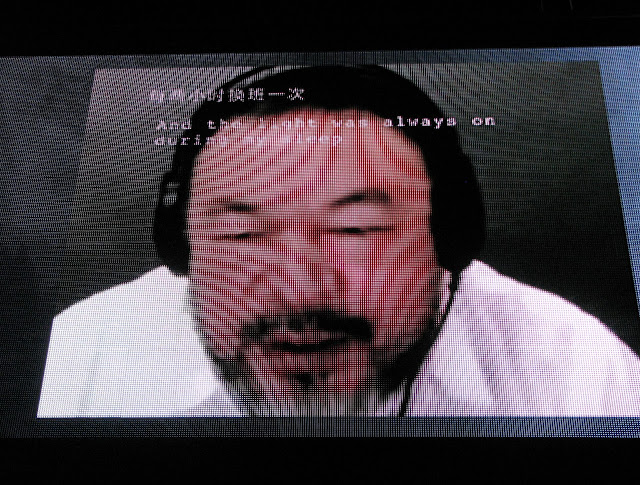 Ai Weiwei also talked about his time spent in detention.  There were a few technical difficulties with the Skype connection, causing delays which resulted in my missing the last half of the show when I had to leave to catch my bus back to London.  You can watch the hour long performance here.

My next post will be much shorter, I promise....hope you're all having a good weekend!
Posted by Forest City Fashionista at 11:26 PM