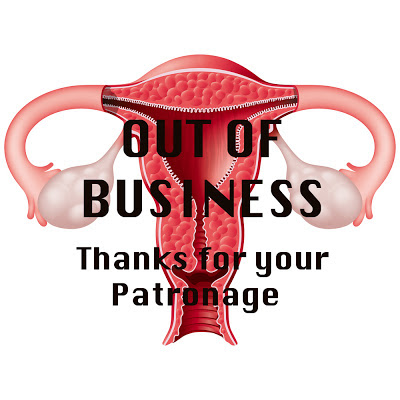 Warning:  This post contains a discussion about Menopause, which according to a television commercial currently running here in Canada, no one talks about.  So of course, I'm going to talk about it.  If you have delicate sensibilities, are under 30, or male, you may want to just scroll through to the photos, which are not about Menopause.


So I had blood work done after my annual poke-and-probe, and when the results came back last week, my doctor informed me that I was in Menopause, and my ovaries had basically shut down.  Given that last year's blood work showed that I was "peri-menopausal", this came a bit of a surprise.  Most women can tell that The Change is near when their menstrual schedule starts to go wonky,  but I couldn't use that as a reference as I had surgery a number of years ago that resulted in no more periods.  I had to wonder where I'd been when my reproductive organs went from "pre-shutdown" to "closed for business", and felt that somehow there should have been more fanfare aside from a doctor's proclamation of "th..th..th..th...that's all, folks"!

When I mentioned this unexpected turn of events to a couple of friends, I was told in no uncertain terms that I had "dodged a bullet", by sailing through with few symptoms, so basically I should just shut up and consider myself lucky.   I remember a friend telling me years ago when she was in her late 40's that she had taken her dog for a walk, stopped at the bank and tied the dog up outside.  She came out, went home, and then wondered where the dog was,  and apparently this was not an isolated incident.  Another friend went through the "covers off, covers on" thing for a while, and when I recently learned that some women can have hot flashes that start in Menopause and continue for the rest of their lives, I very much appreciated my relative mild symptoms of the occasional night sweats, weight gain and some episodes of "what did I come in here for?".  Still, the news left me feeling a bit melancholy, even though I was not mourning the end of my fertility, which I had put an end to at 30, when I knew that children were not in my life plan.  An older friend pointed out that menopause "is one step closer to the end", which is true, and kind of depressing.  So what's a woman to do to acknowledge another milestone on the road of life?  My friend Heather had a suggestion...

A Girl's Day Out! 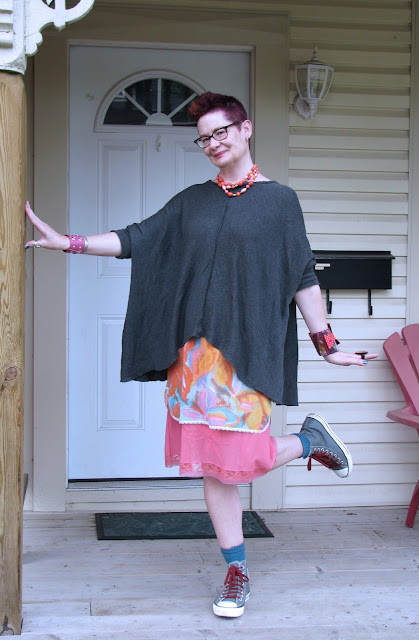 The weather was all over the place -  sun, clouds, rain, wind, high humidity - so comfortable layers, sensible footwear, and colourful jewellery were the order of the day.  My skirt is two slips layered together. 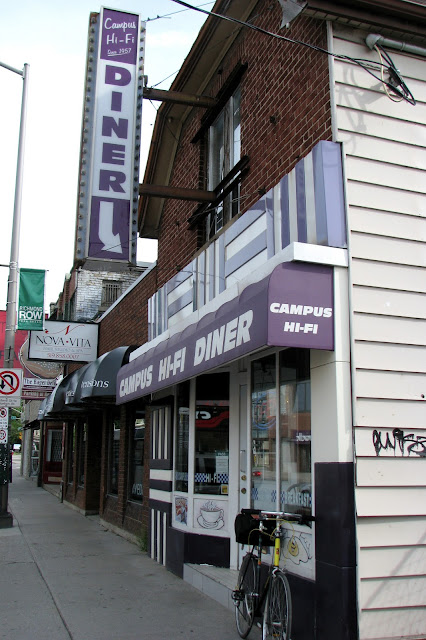 First stop - the Campus Hi-Fi, which has been a favourite of university students and other fans of homestyle breakfasts since 1957.  The breakfast wrap is gigantic, and incredibly delicious 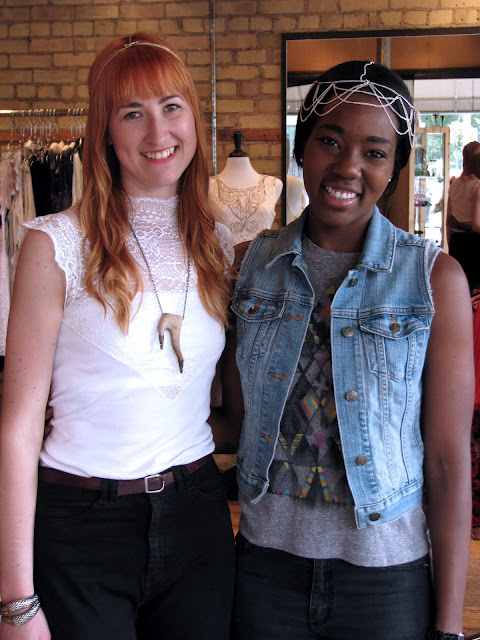 Next stop -  Lolita, where local artist and designer Jessika McRae (on the left) was launching her line of chain headdresses called Nightingale.  The woman on the right works at Lolita, and was modelling one of the headpieces. 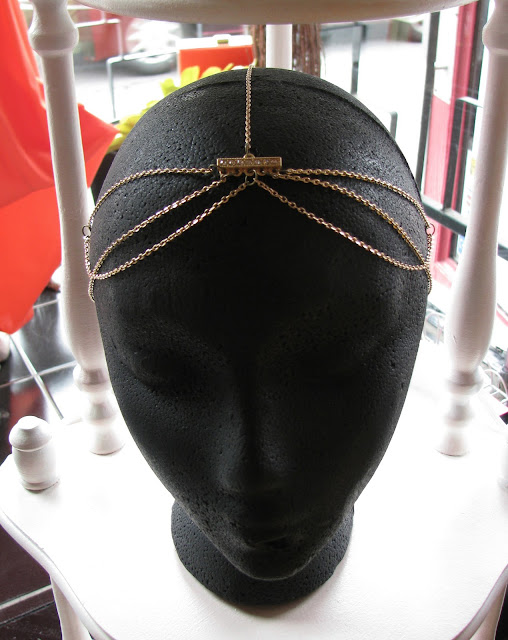 Another of McRae's headdresses in gold metal 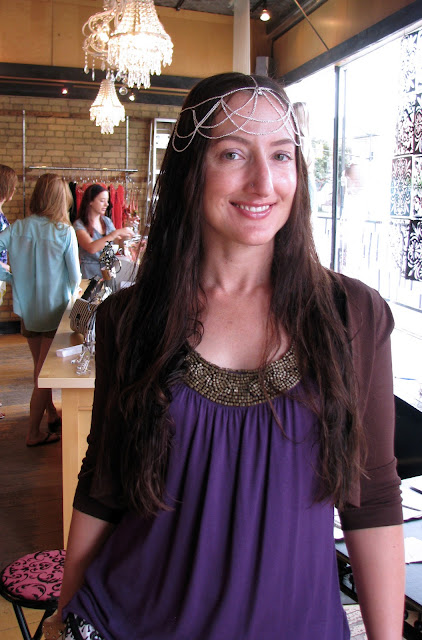 Heather, channelling her inner warrior princess in one of McRae's designs.  I tried one as well, but my hair style isn't really suited for headpieces like this, which look great on longer hair.


Our next stop was the Western Fair Farmers' Market, where I picked up some more more maple bacon cookies, and we browsed through a new booth on the second floor called Faye's Finds, a consignment store with an interesting selection of new and secondhand items. 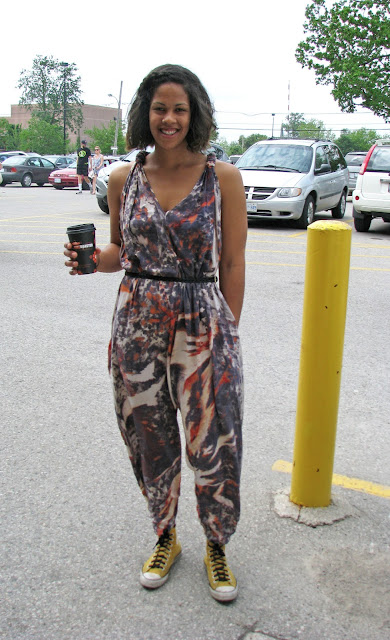 I loved this woman's funky jumpsuit, which she got from a friend's vintage store in Toronto, Bridge and Bardot. 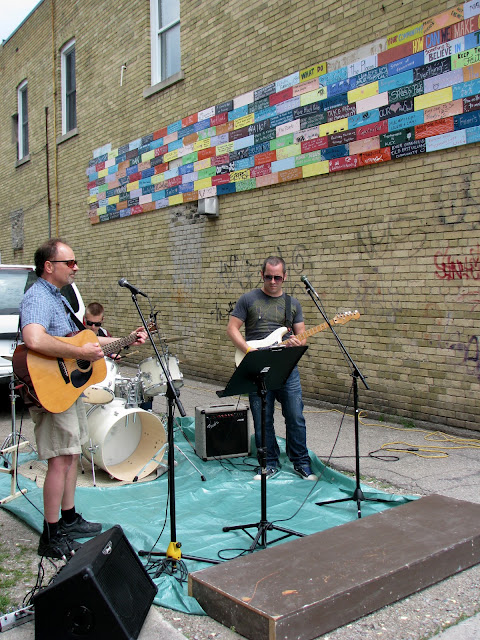 There was a sidewalk sale in my neighbourhood, and not far from the Farmers' Market some musicians were playing in an alley. 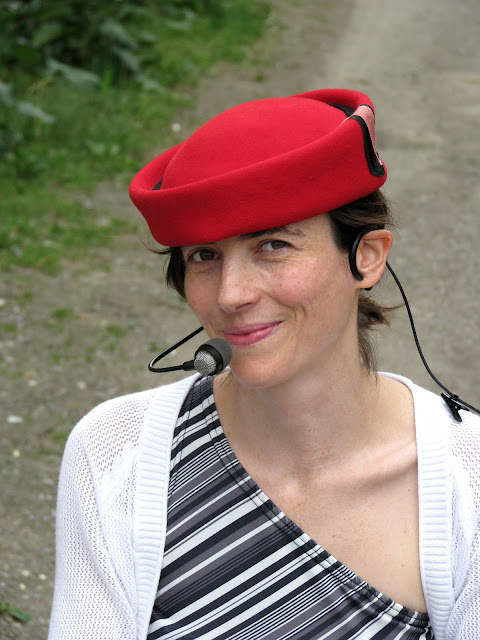 I caught this woman, wearing one of her grandmother's hats, just before she started her set 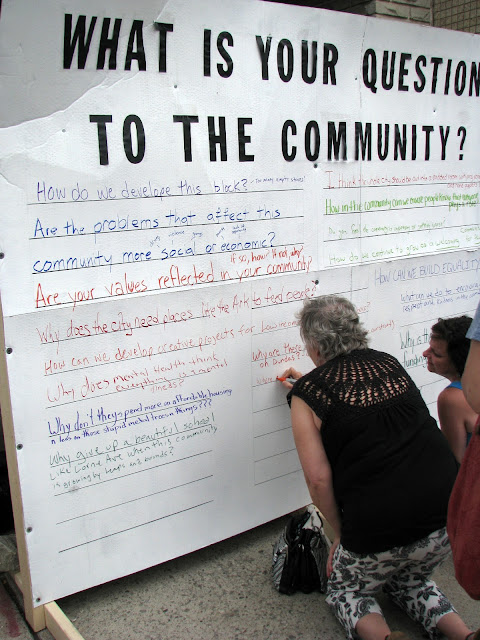 
A trip to Talize followed where I found some things I needed for my Travelling Yellow Skirt photo shoot, and then a stop at the Merla Mae for ice cream.  We managed to cram in an impressive amount of fun by that point, but still had time for one more stop.... 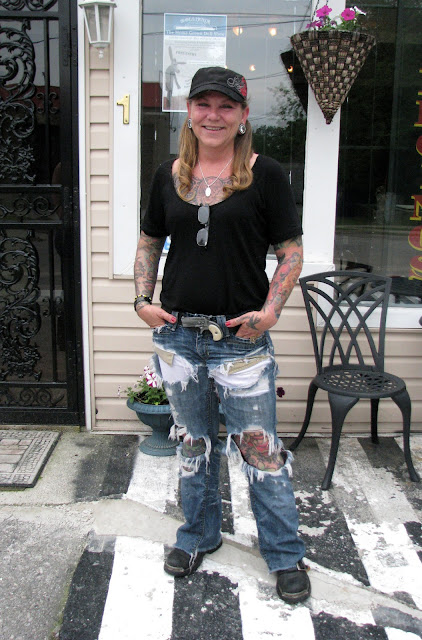 Jacqui Gallant, a body piercer and doll artist, is also the owner of Dollirium, Canada's leading Art Doll Gallery.  The Gallery has a new show entitled The Home Grown Doll Show, featuring doll artists from London, Toronto, St. Thomas and Stratford.  I had missed the last two shows so I really wanted to see this one. After viewing the show, Heather and I chatted to Jacqui outside her studio and admired her revolver belt buckle. 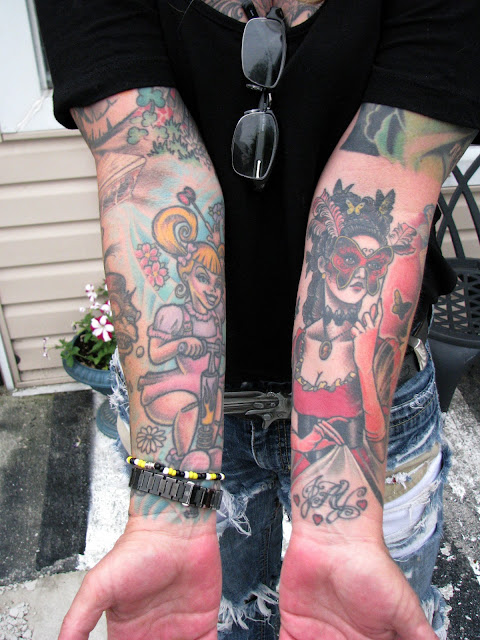 Jacqui's sleeves are comprised of work from tattoo artists from all over the world.


There are some fabulous dolls and sculpture in the latest show, some of which I'll show you in my next post.
Posted by Forest City Fashionista at 9:17 PM