We Can Be Heroes, Just For One Day

Saturday, May 4th was Free Comic Book Day, a day anticipated by thousands of comic book and pop culture fans each year since its beginning in 2002.   On the first Saturday in May, thousands of participating comic book stores across North America give away free comic books.   Publishers print special edition comic books specifically for Free Comic Book Day, and interestingly enough, retailers do not receive the issues for free. 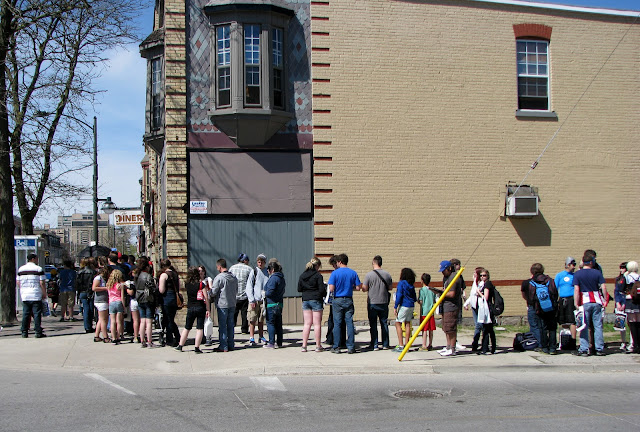 Who doesn't like a free comic book?  Not these people, who were lined up outside Worlds Away on Dundas Street.  It was a nice change to see my neighbourhood full of people on a Saturday. 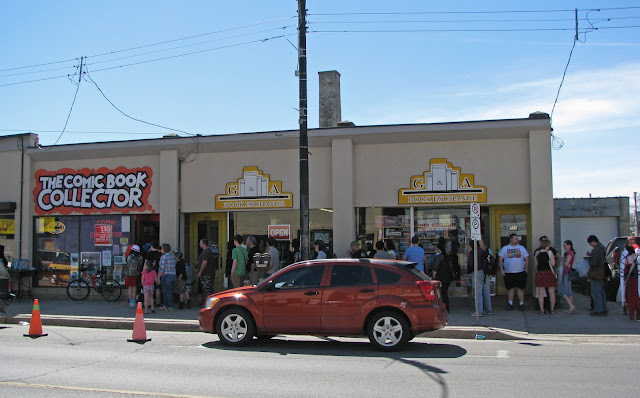 Or these people, who lined up for hours outside The Comic Book Collector and Neo Tokyo

Comic books have had an appreciative audience since their first appearance in 1934.  The first comic book contained reprints of comic strips from the newspapers, but after a few years, original content took over as it was cheaper to purchase work from independent artists.  The success of Superman prompted the creation of many other characters that came to be known as "Superheroes",  such as Captain America, The Flash, Batman and Wonder Woman.  After a decline in popularity of the superhero theme in the late 40's,  science fiction stories started to appear on the comic book shelves, followed by Westerns, Archie, talking animals such as those featured in Walt Disney's Comics and Stories, and re-tellings of literary masterpieces in the Classics Illustrated Series.  My comic book tastes were fairly pedestrian when I was a kid, and I stuck mostly to tame stuff like the Walt Disney comics, Classics Illustrated, along with the occasional Wonder Woman thrown in for variety. When I discovered Millie the Model it soon became a favourite for the clothes.

In the 60's, underground comix like those created by Robert Crumb and Gilbert Shelton became popular with adult readers.  In the 1970's Sci-fi and adventure comics appeared, like the Canadian-created Cerebus and Heavy Metal.  The 80's was the period where comics like Love and Rockets, created by the Hernandez brothers appeared, which combined a punk sensibility, magic realism and Latin American culture and a cast of strong and sassy female characters.  The 80's also saw the publication of Art Spiegelman's holocaust fable, Maus, which became an international best-seller.  British writers like Neil Gaiman injected new life into the American comic book culture with his series Sandman, and Superheroes have again become popular.   There is enough diversity to be found on the shelves at your local comic book retailer to appeal to readers of all ages and both sexes. Many people take advantage of the day that celebrates comic book culture to dress in costumes of super heroes, villains, princesses, sci-fi characters, etc. For some, like the group above,  it was a family affair - Wonder Woman, The Mighty Thor, and Merida, the red-haired heroine of the Disney/Pixar film Brave 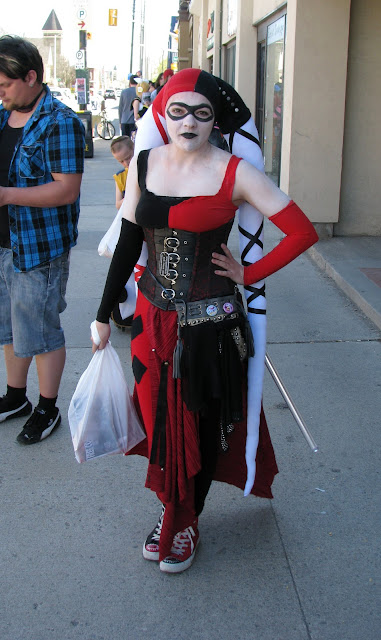 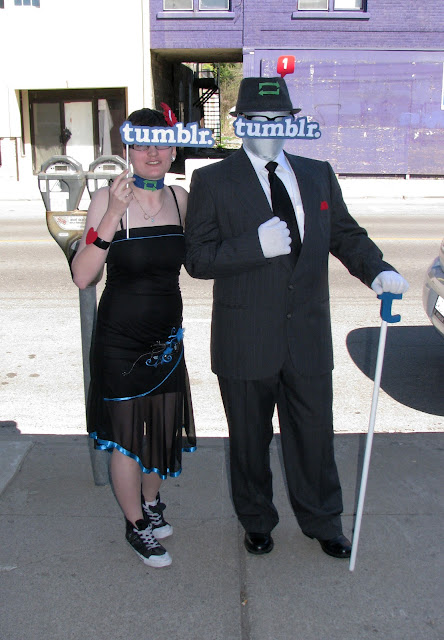 Costumes ran the gamut from this couple's tribute to Tumblr. 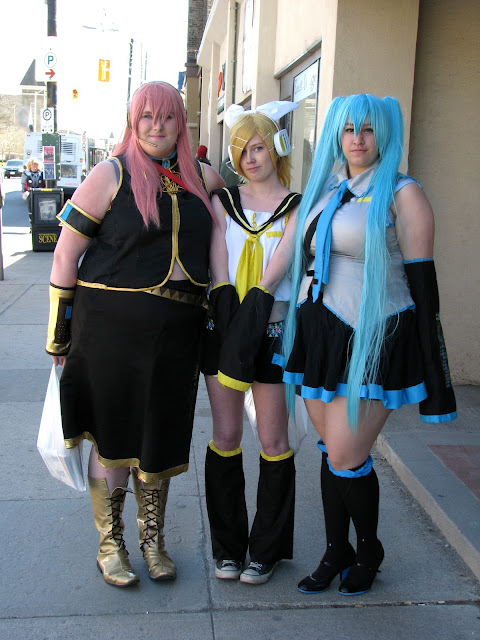 I  assume that these young women are dressed to represent characters from Japanese Anime - I neglected to ask them for specifics.  Love the wig colours! 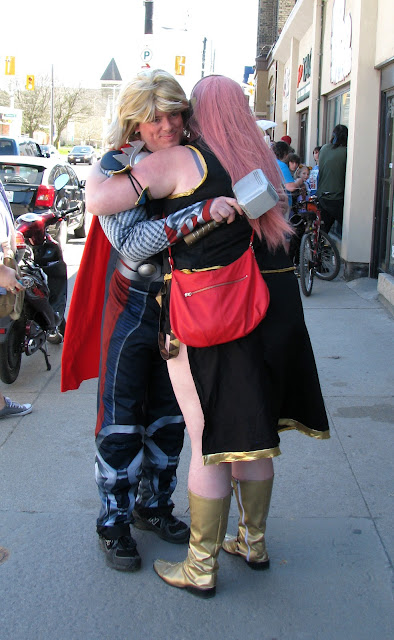 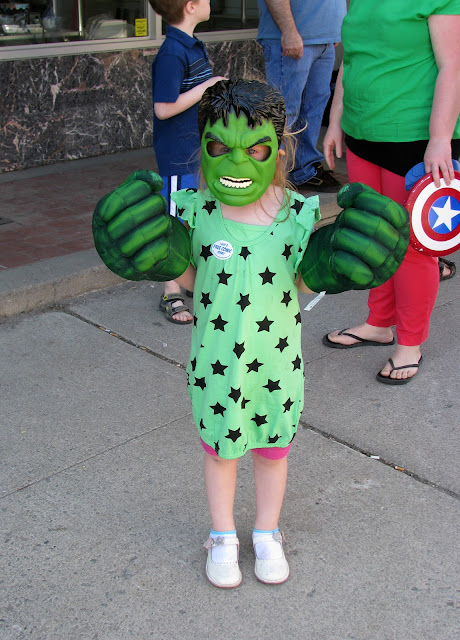 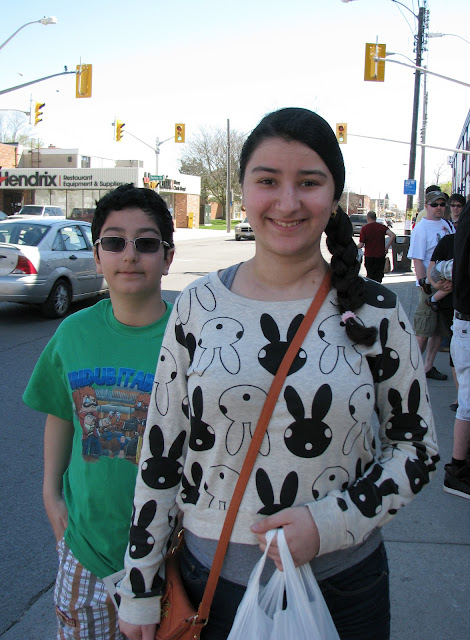 Even though this young lady and her brother were not wearing costumes, I had to have a photo of her uber-cute bunny sweater! 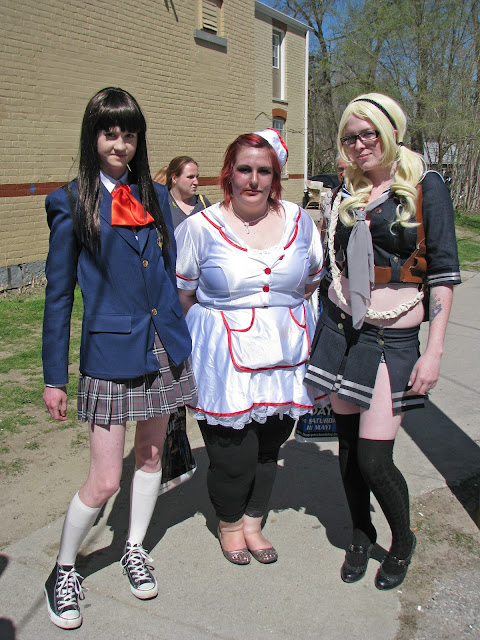 As my knowledge of manga, superhero and comic book characters is limited, I will not pretend to know who these three women are dressed as, but they looked pretty cool. 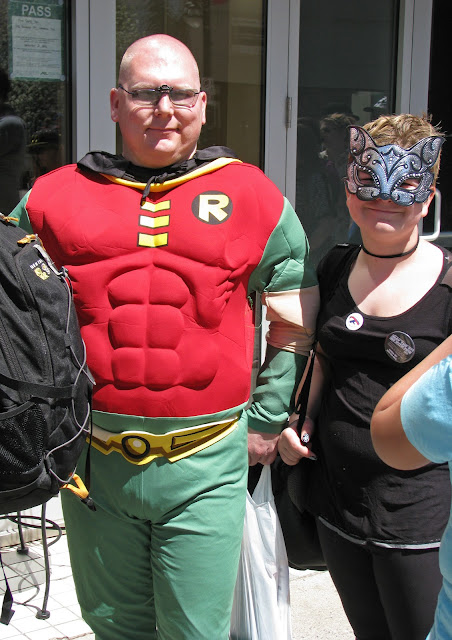 I believe this guy is supposed to be Batman's sidekick, Robin (thanks Sheila, I should have known that), with an admirable six-pack, and the girl next to him is wearing an awesome kitty mask 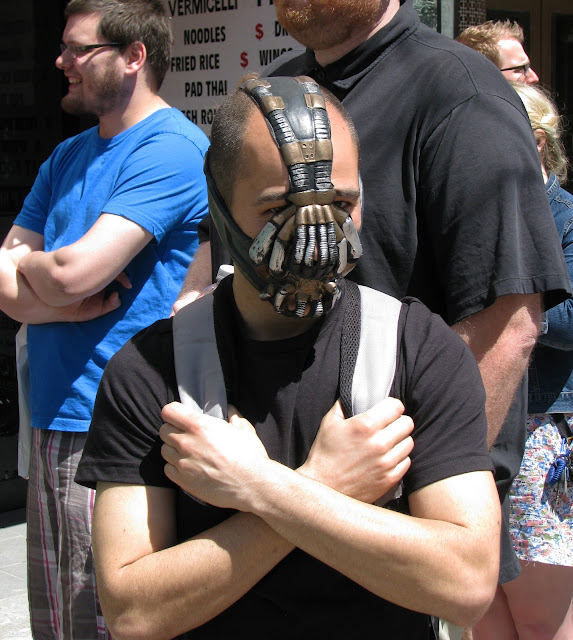 Creepy-cool! Thanks to a fellow blogger, for identifying this guy's mask as that of the character Bane, from the latest Batman movie, The Dark Knight Rises 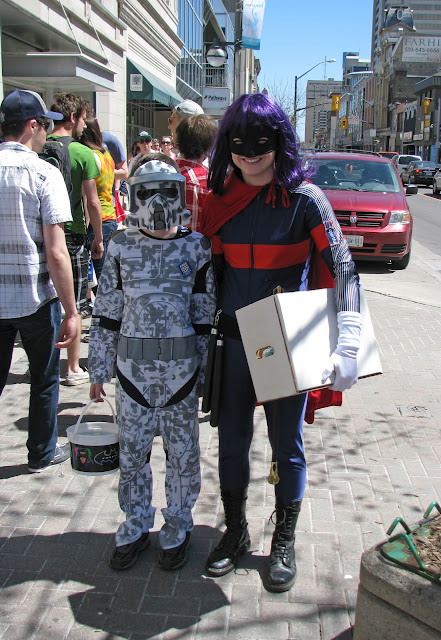 I've photographed the young woman on the right before, but not dressed as Hit-Girl from the film
Kick-Ass.   You may recognize the lycra onesie she's wearing as the same one that Adam, from The Sentimentalist, is wearing in this post. 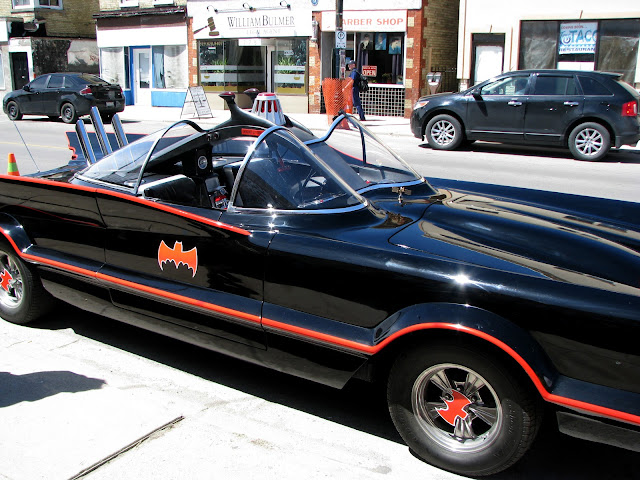 The car, modelled after the iconic 1966 version driven by Adam West as Batman in the TV series,  was a huge hit with kids and grown-ups.  Heck, I'm not a car afficionado, but I thought it was pretty awesome.

Below is the original Batmobile, driven by Adam West 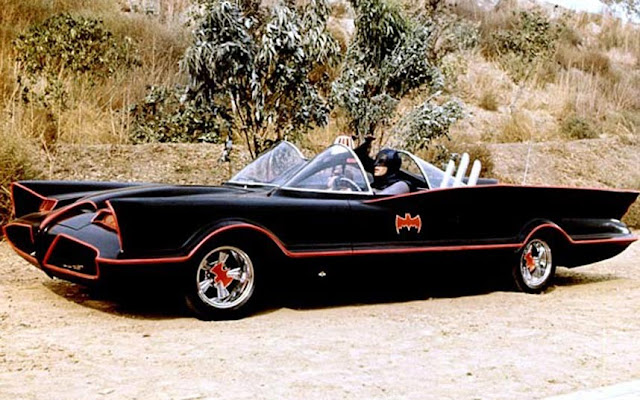 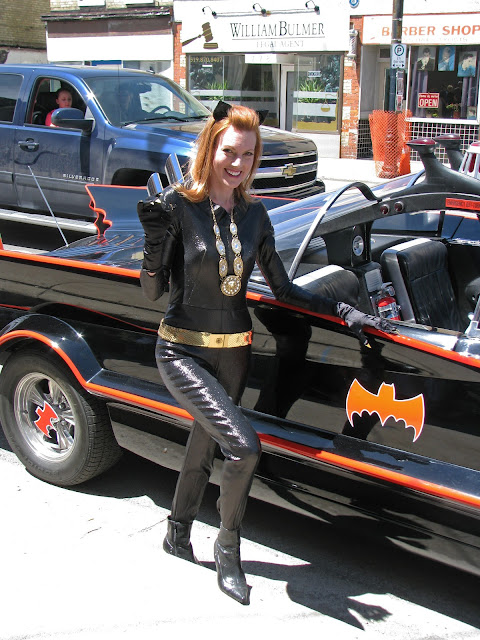 No Batman, but Catwoman made an appearance 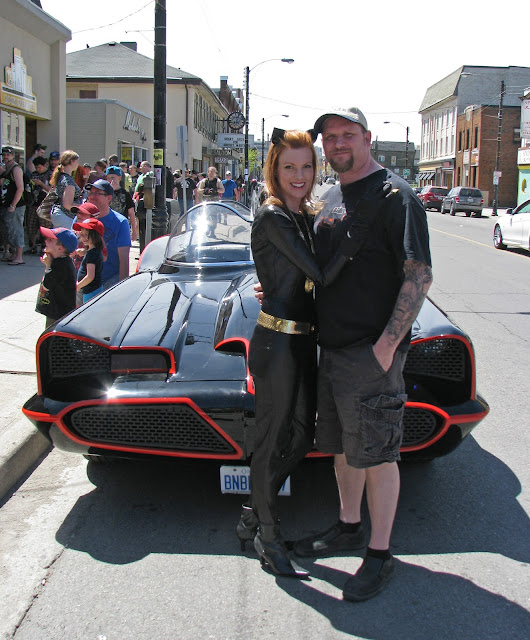 Andrew (on the right), the owner of the car, purchased a kit from the States and spent four years transforming a 1979 Lincoln car body into a credible version of The Batmobile.   The car is fully driveable, and they have had it out on the road for a year, taking it to various automobile shoes and Comic Conventions. 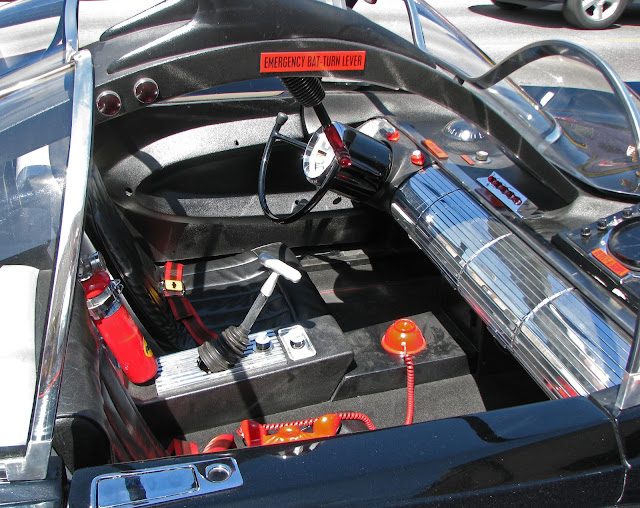 Hopefully Andrew doesn't make calls while driving as the Batphone does not appear to be "hands-free"!   He does have a fire extinguisher readily at hand, in case the car bursts into flames.

Free Comic Book Day is the first Saturday in May - see you next year!