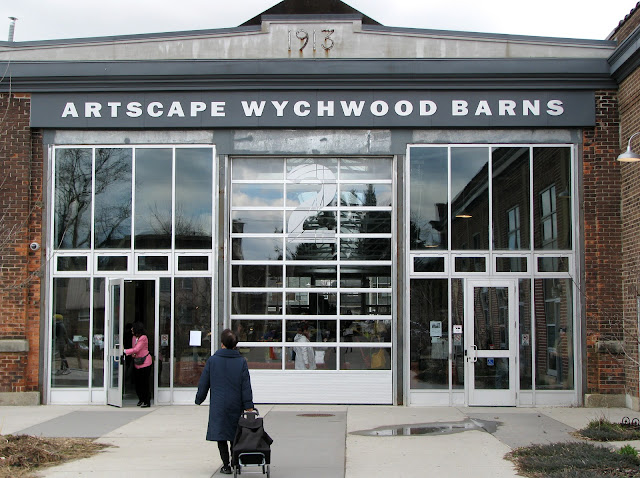 Gadsden's Toronto Vintage Clothing Show is held in the Spring and Fall at Artscape Wychwood Barns.  The Barns is a beautiful space that was once a streetcar repair facility and has now been turned into a complex that currently houses artists and their families, non-profit organizations, a community gallery, and a glass-roofed open space used for events like the Vintage show.

The show is run by Gadsden Promotions Ltd., and I had been in contact with Wendy Gadsden who had mentioned how much she enjoyed my review of last Spring's show, and hoped I was able to attend this year.   The show, held on April 14th, featured 29 exhibitors from Ontario and Quebec selling vintage clothing, textiles and accessories dating from the turn of the century to the 1980's.  There was enough variety in prices that there was something for every budget.  I had a great time chatting to, and photographing, vendors and other vintage lovers.  It's nice to spend time in the company of other people to whom you do not have to explain your wild enthusiasm for a bakelite bracelet, a gaudy 80's jacket, or a really beautiful vintage hat. 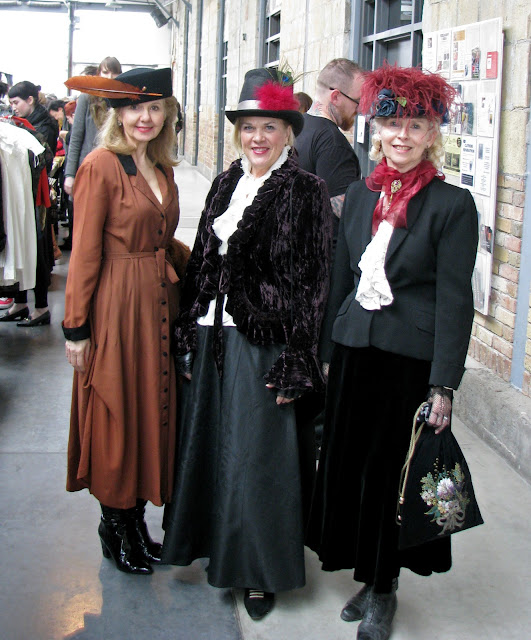 I had just got in the show when I spied this trio of women in their delightful hats. 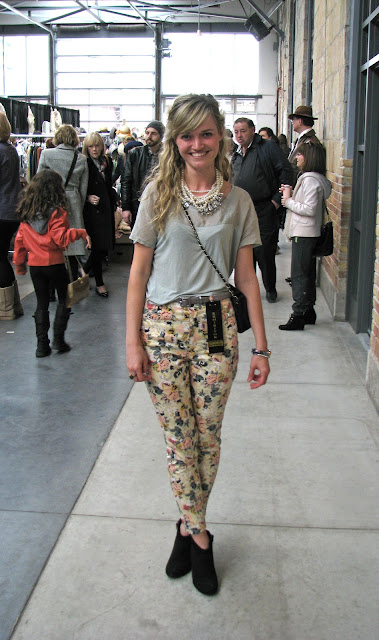 Paige Burchell is a vintage seller and is also in charge of social media for the show.  She took a photo of Megan and I in our matching monocrome for the show's blog, which you can see here 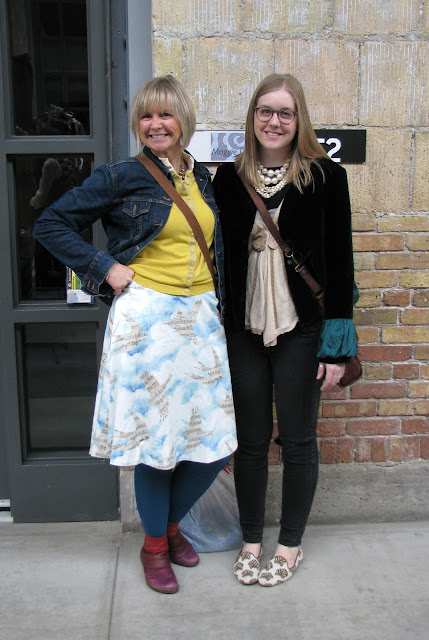 This mother and daughter were enjoying the show, and had obviously dressed for the occasion.  Mom found her bird print skirt at Anthropologie. 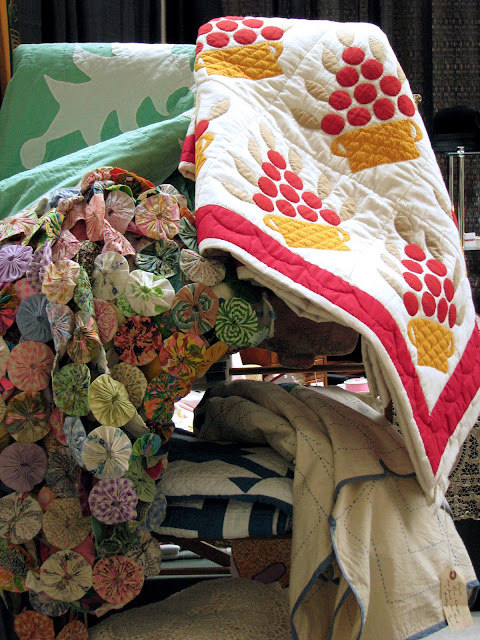 If you were looking for a vintage quilt or bedspread, there were some very pretty ones for sale 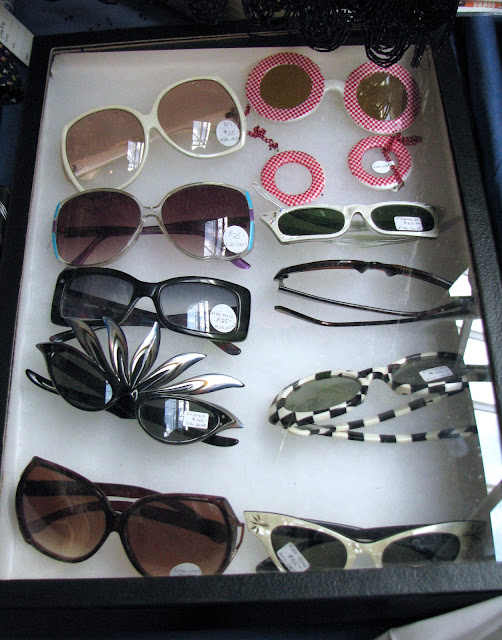 Vintage sunglasses have become extremely popular, and there were all kinds of shapes and styles on display.  The red and white checked ones in the top right corner don't have arms - they are held on your face by the weight of the plastic rings on cords that hang behind your ears. The black and white checked ones were my favourite. 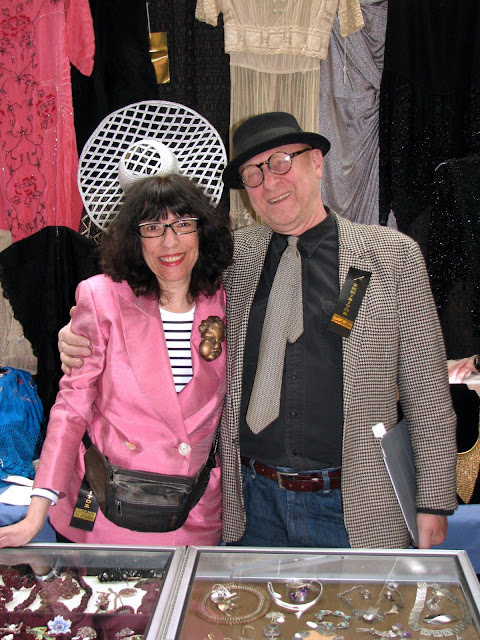 The sunglasses in the photo above are from Pulver Zajfman (left) and Yank Azman's booth. Yank and his wife, who are regular exhibitors at the show, sell antiques and also rent props for films, television and theatre.  I had met Yank at last year's show, where we had a very entertaining conversation and I was happy to see him again - wearing the same outfit as he did last year!  I purchased the silver straw circle hat you can see on display behind Zajfman's head. 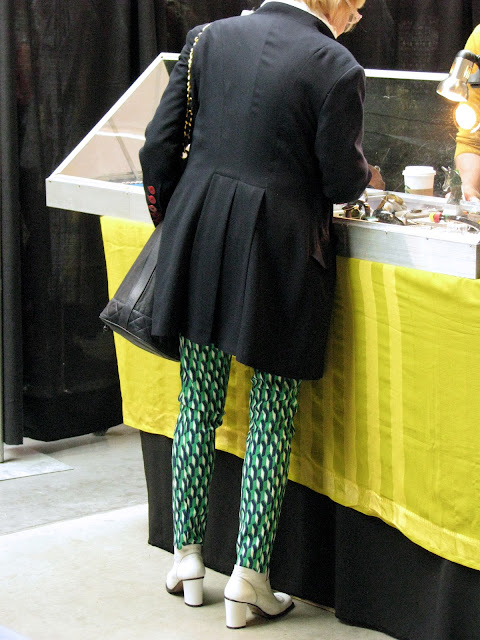 This woman had a bit of a modern English dandy look about her, at least from the back 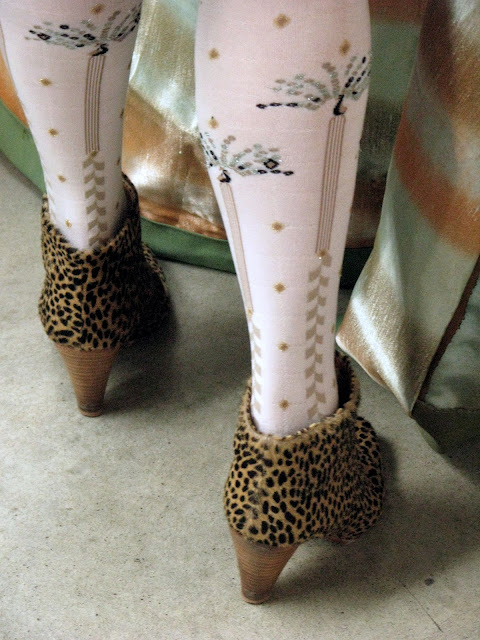 I'm not opposed to crouching on the floor to get a shot, especially when it includes leopard print booties and tights with a print of what appears to be peacocks perched on columns!  She gets the prize for the most interesting leg adornment of the day. 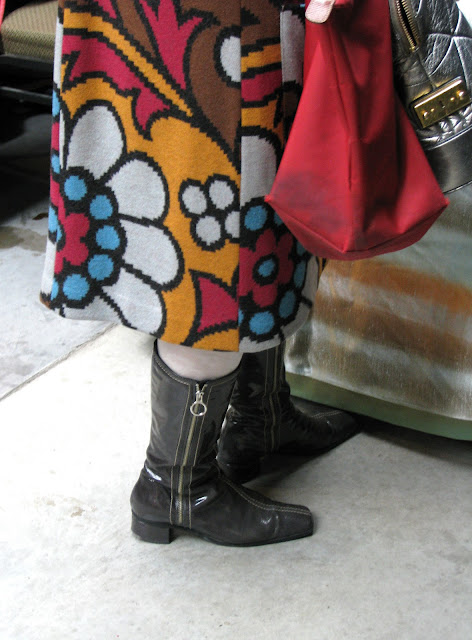 Another stylish lower half - Isn't the coat pattern amazing? 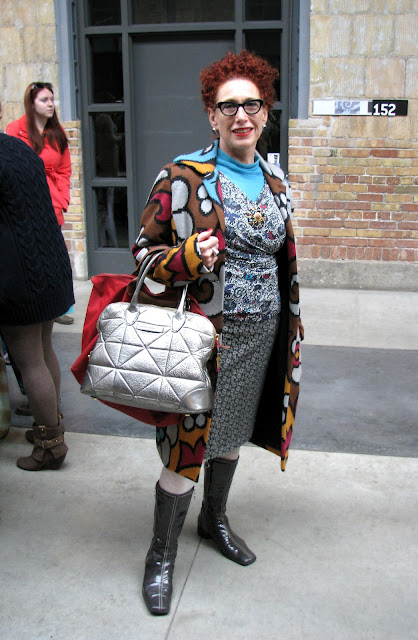 The rest of her was just as cool 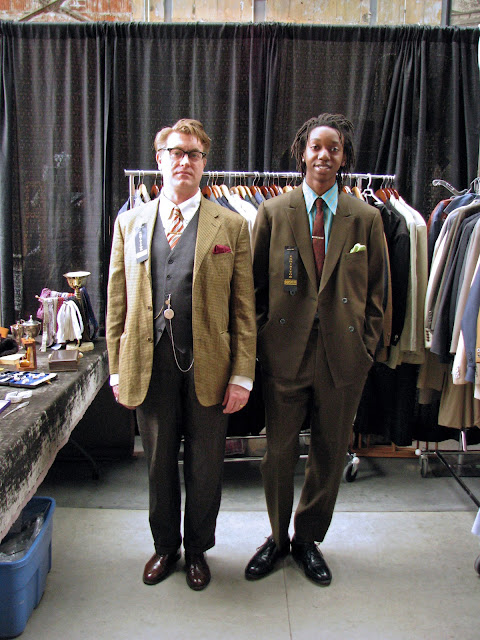 There are men who come to the show looking for vintage tie clips, cuff links, neck ties, and these two dapper gents had the goods and the sartorial smarts to provide good style advice 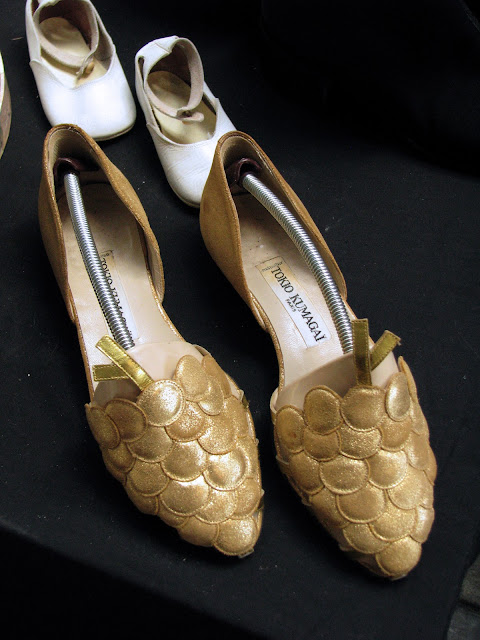 If only my feet were small enough to fit into these beautiful gold flats.... 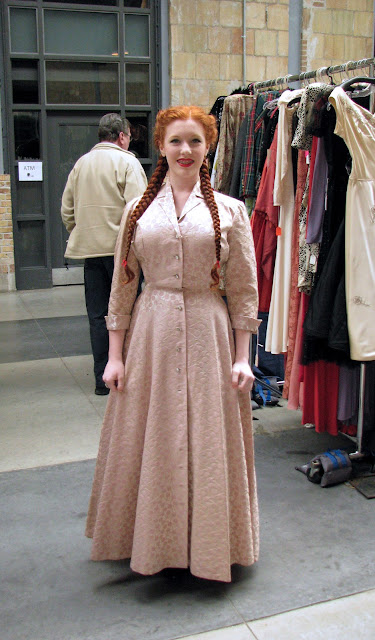 This young woman drew quite an audience while she was trying on this brocade coat.  The combination of her fiery braids, red lipstick and pinup girl figure made her an irresistible subject for the camera, and conjured the image of a glamourous Anne of Green Gables. 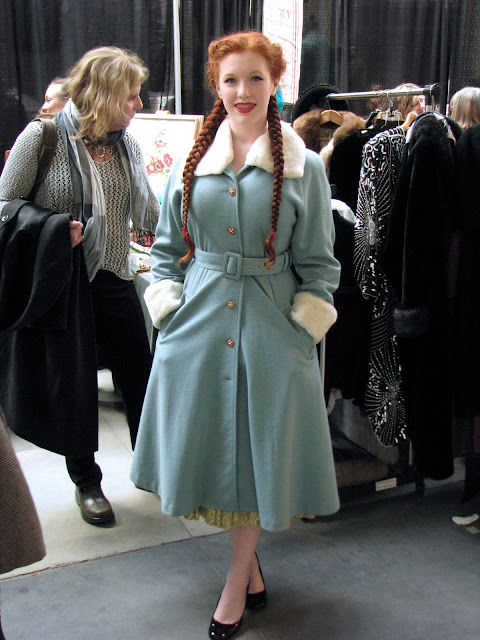 ....and here is what she wore to the show.   That coat is an absolute dream! 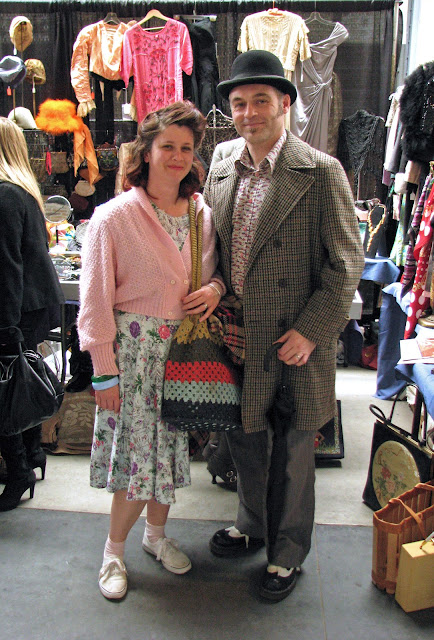 The guy in this photo said his wife got him into wearing vintage - initially, when he got the coat he's wearing in the photo, he thought it was "an old man coat".  It certainly doesn't look like an old man coat when paired with cool shoes, a shirt patterned with pink and purple cars, and a snappy bowler!  Their young daughter was with them and was also wearing a fun outfit, but she wouldn't stay still long enough to get her in the photo. 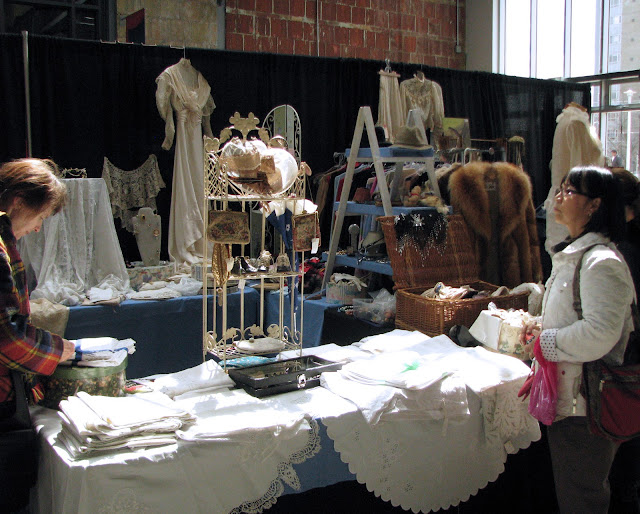 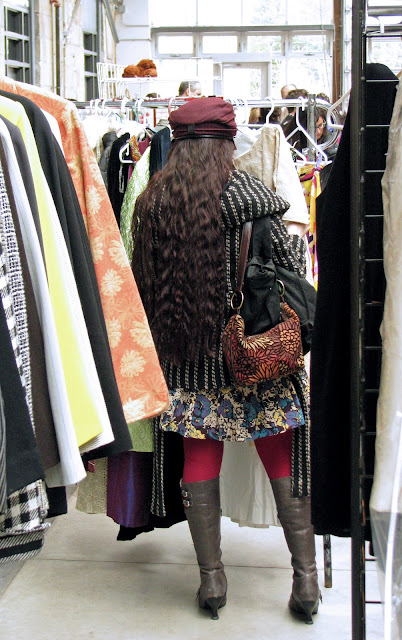 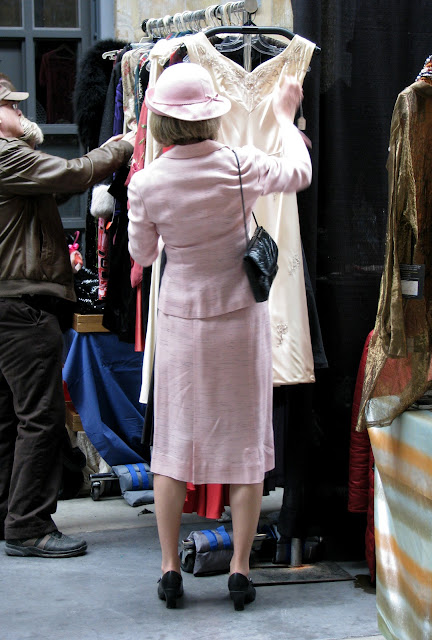 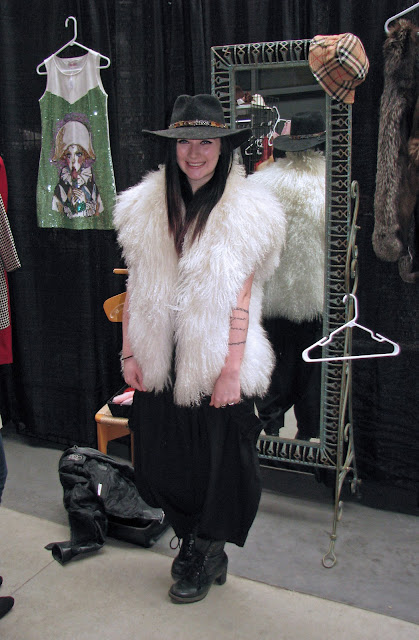 I saw this woman a few times during the afternoon, first when we were both trying on items at the  same booth.  I thought she looked adorable in this mongolian lamb vest (which she didn't buy).  I later found her trying on a black and red 80's peplum jacket and while we were talking, her friend came up and said, "I can't believe someone bought that bracelet!!  I even hid it under a couple of necklaces!" 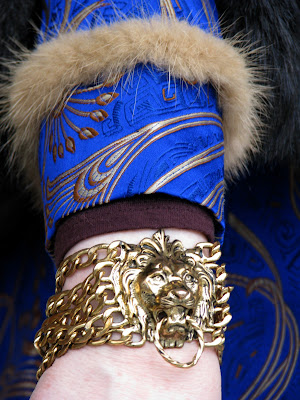 It was a rather freaky coincidence that this was the bracelet she was referring to...

In addition to the lion door-knocker bracelet, purchased from Reflections of Tyme, I also brought home two other items from the same vendor.  Unfortunately, they may not get worn until the fall, now that warm weather has actually arrived.  I might have to photograph them anyway just to show them off!


Thanks to Jeff and Wendy Gadsden for complimentary admission to the show, and their support of my blog.  I'll see you again next year!
Posted by Forest City Fashionista at 9:00 PM