Last Thursday I attended Unbound, the annual fashion show held at Museum London, presented by the graduating students from the Fashion Design program at Fanshawe College.  This is the third year I have been graciously allowed to photographed the show as "Media".  The Fashion Design program, which is highly respected in the fashion industry, celebrates its 40th Anniversary this year. 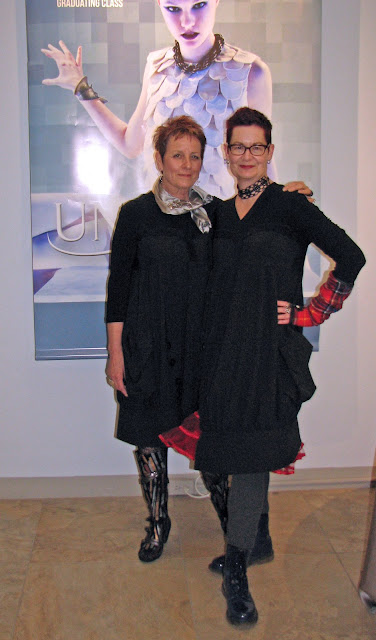 I had just stepped in the door of Museum London, when I ran into a woman I know from one of our favourite stores, From Mars.  She has modelled in a couple of their fashion shows and always looks great whenever I see her.  Obviously, we have good taste as it turned out we were wearing the exact same dress that we had both purchased at From Mars.  I have never been in this situation before, but instead of the mortification that apparently one is supposed to feel when confronted with another woman at an event who is wearing the same dress as you, I thought it was pretty cool - we accessorized the dress in our own way (me with arm warmers and a crinoline, she with awesome boots, a little jacket and neck scarf) and we got her husband to document the moment.

So, enough about me, now on to the rest of the evening... 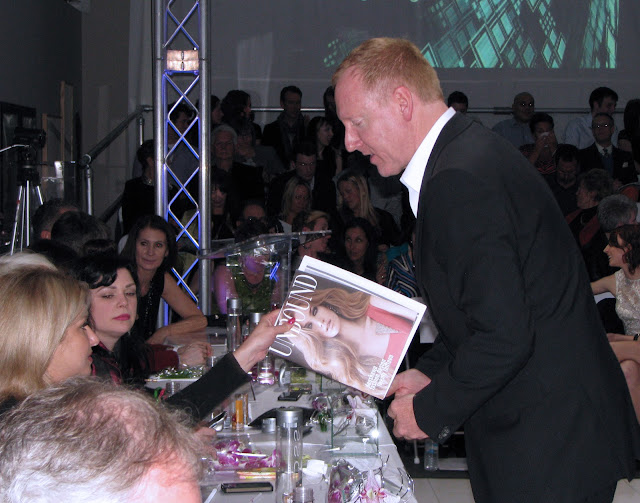 The Emcee of the show was Glen Baxter, host of CTV's In Fashion, seen here talking to the judges. 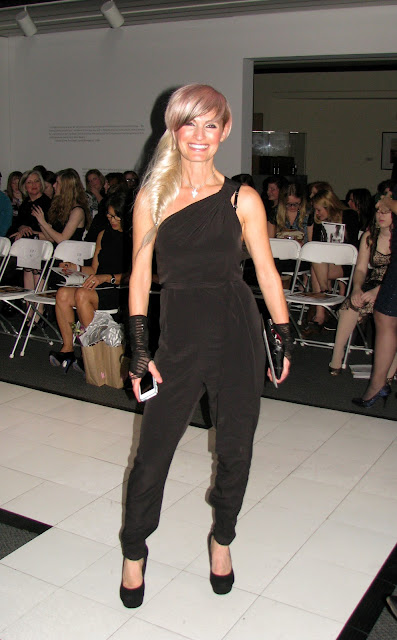 I took advantage of the time before the show started to shoot a few audience members whose style was runway-worthy.  The woman in the photo above is the owner of Studio H, the official hair sponsor of the show.  She rocked her disco-esque jumpsuit with a fab side ponytail. 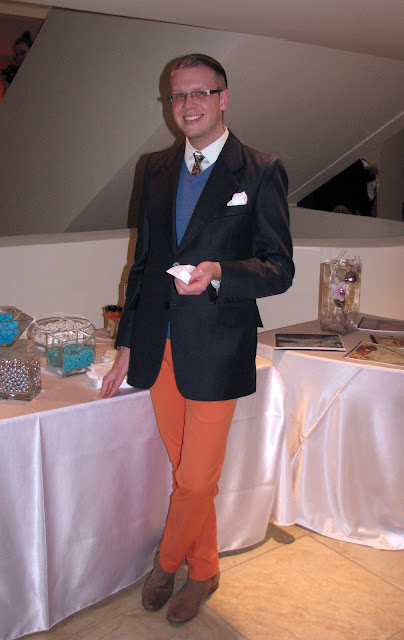 This is the second guy I've seen in London who has successfully incorporated orange pants into an outfit - they look great with the different shades of blue. 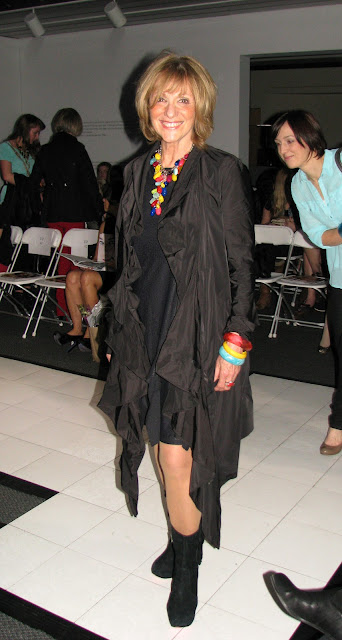 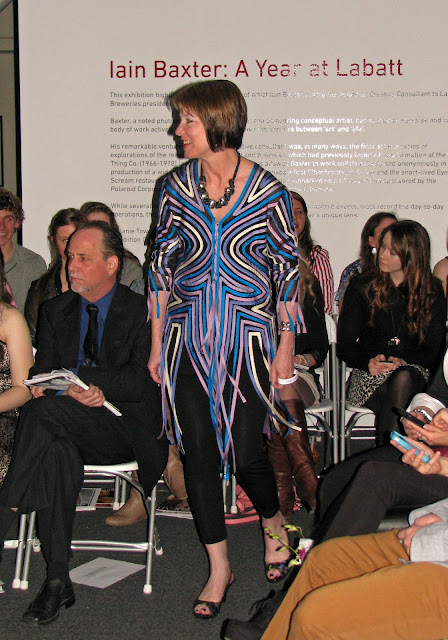 Jennifer Wright, a professor of fashion design at Fanshawe, stood out in her ribbon embellished tunic 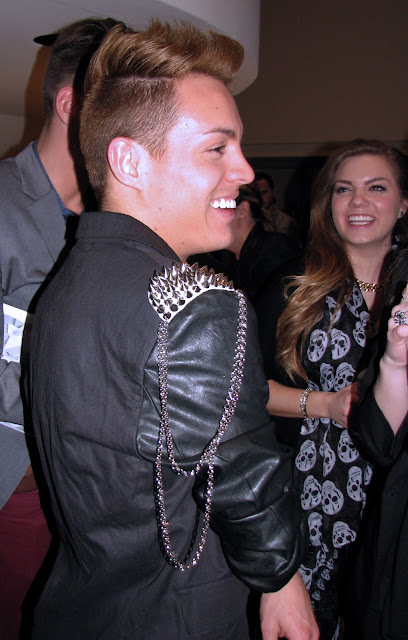 
The evening lineup featured the designs from nine graduating students from the program.  The students' work was reviewed by a panel of judges that included designer Franco Mirabelli and Erin O'Brien, the Marketing Editor at Flare Magazine.  The collections featured both daywear and eveningwear, in fitted, feminine shapes, soft colours, and lots of shine in both fabric and embellishment.   Overall, the clothing was very pretty and there were definitely echoes of the influence of shows like Mad Men, in the "lady-like" fitted, knee-length dresses.  The elegant up-dos on the models and minimal jewellery kept the focus on the designs. 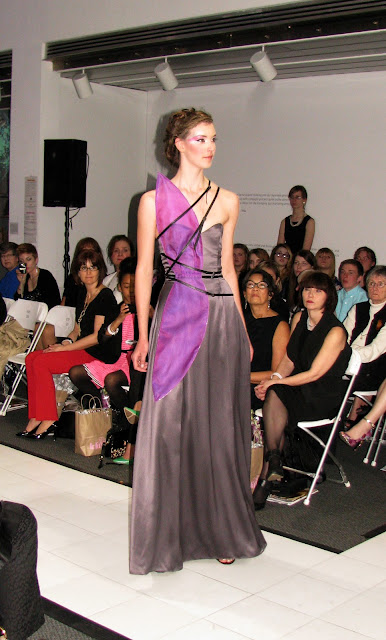 First up was a collection of evening wear by Ashley Foster titled "Savage Flora" that featured the addition of petal shaped pieces of fabric on some of the dresses. 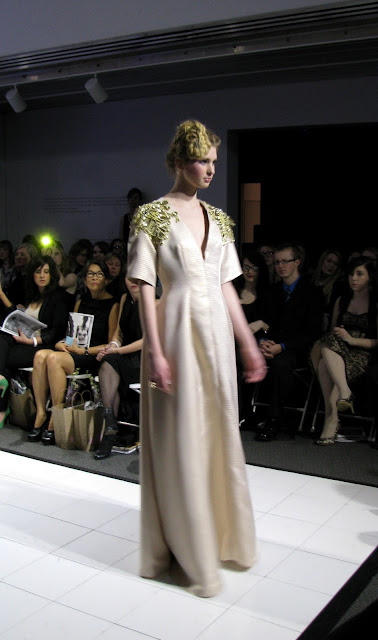 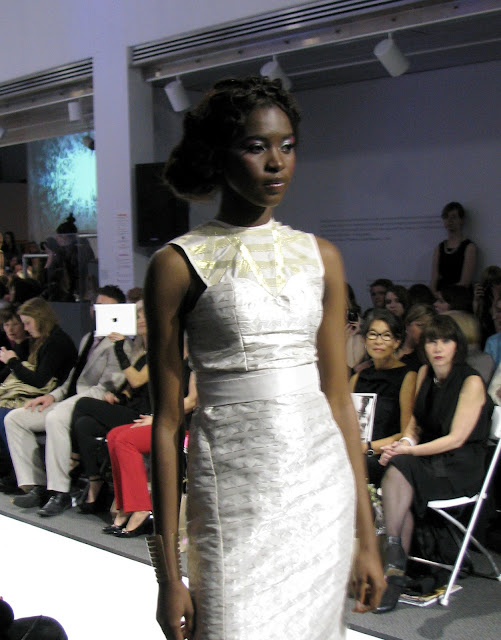 another dress from Meehan's collection 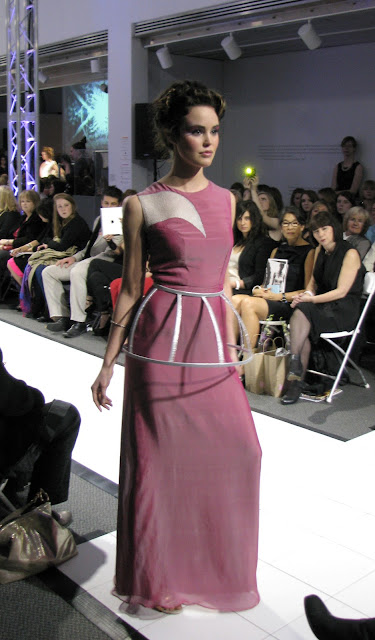 Jessica Jurkowski's collection, which included the raspberry gown above, received two awards at the end of the evening 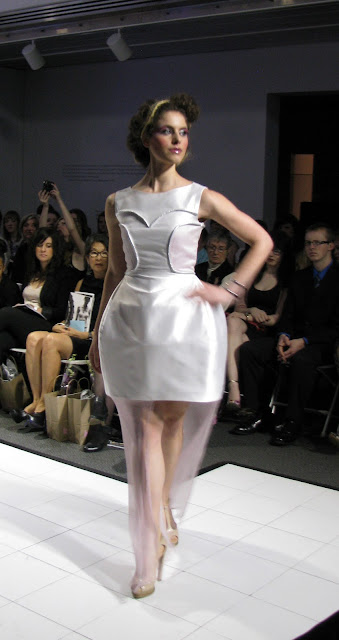 I liked the shape of this dress, which was also part of Jurkowski's award-winning collection 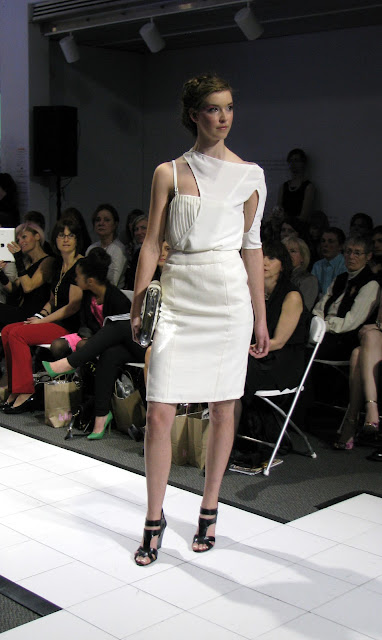 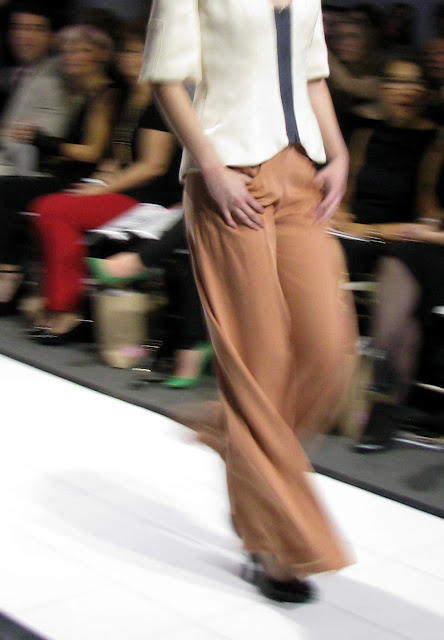 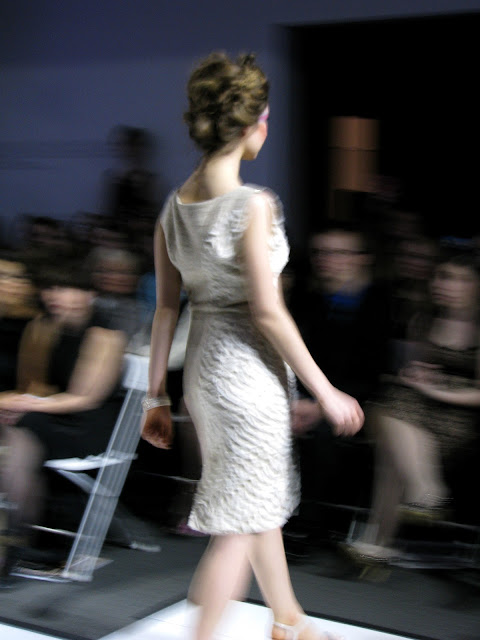 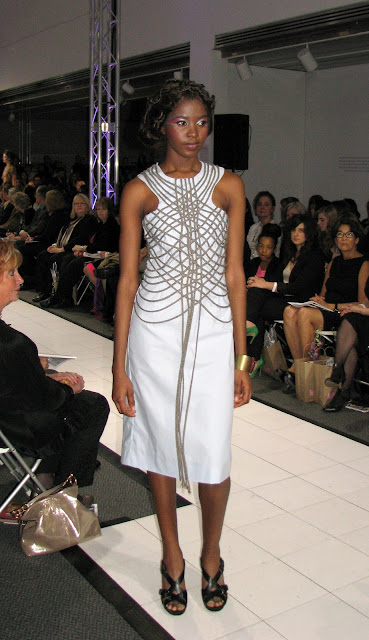 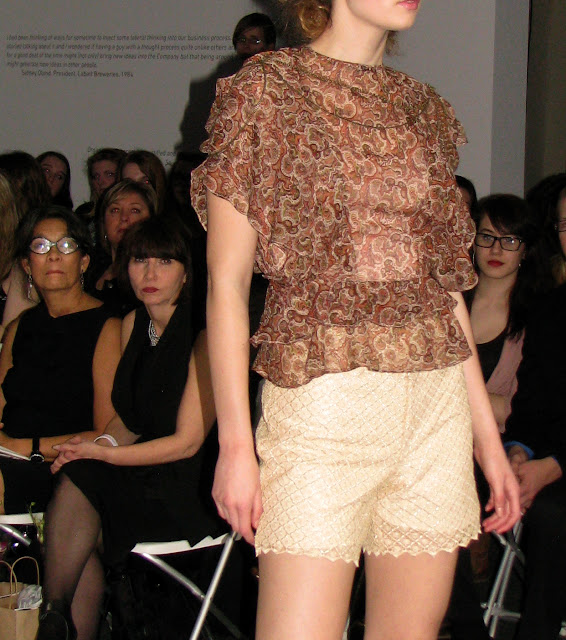 Another of Shore's designs was a pretty mix of soft ruffled blouse and tailored shorts with lace overlay.  She was the only designer of the ones who showed in the evening that incorporated pattern into her collection. 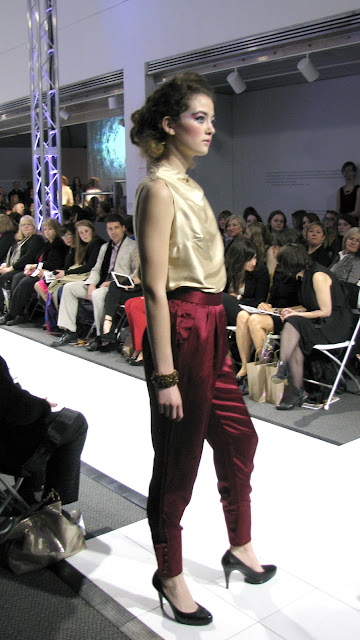 I love the rich cranberry colour and button detail of these silk pants, which are part of a collection by Lacie George 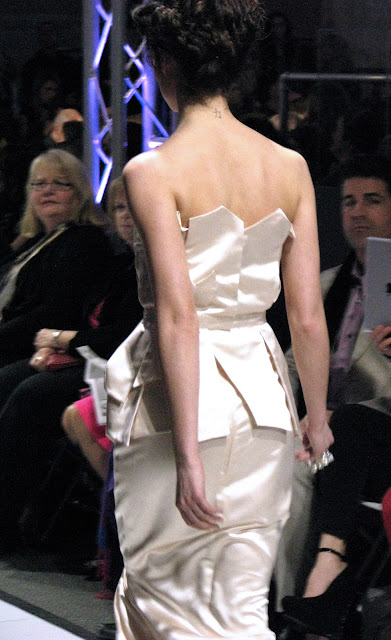 This fitted and elegant dress is part of Julia Cangemi's eveningwear collection.  Cangemi was one of the three recipients of the Flare Award for Best Collection. 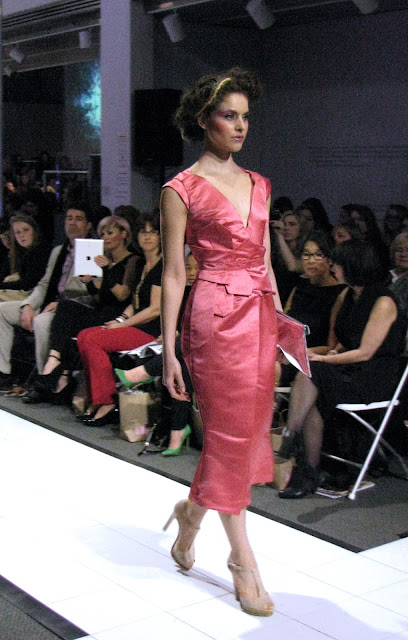 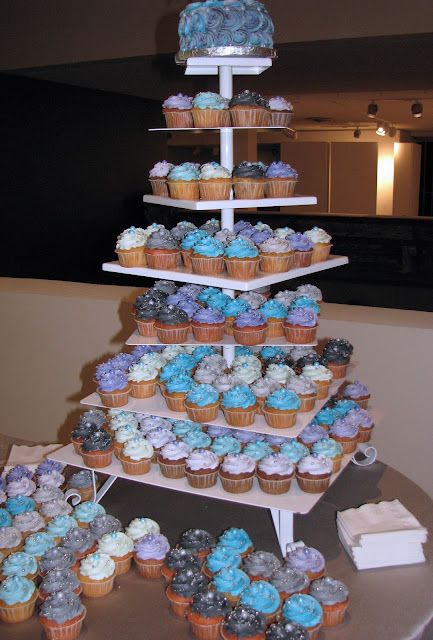 On my way out I couldn't resist snapping a photo of the cupcake tower that had been set up for the post-show reception. I was able to resist the temptation to eat one.

Congratulations to the award winners, and best of luck to all of this year's graduating students!
Posted by Forest City Fashionista at 12:10 PM