By now you have likely figured out that I was in Toronto a couple of weeks ago, and was able to visit with Megan, aka The Fashionable Bureaucrat.  It was a fun couple of days, taken up with the consumption of yummy food, the appreciation of some very cool art at the Art Gallery of Ontario, and browsing (and in my case, shopping...) at the Toronto Vintage Clothing and Textile Show. 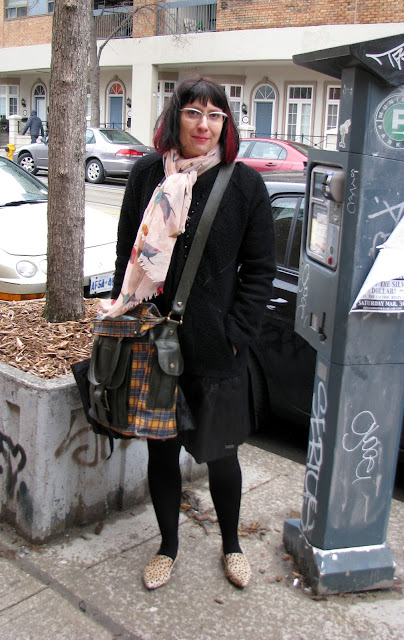 And here is Megan, generously braving the rain so I can get a photo.  We were on our way to the Art Gallery of Ontario to see the exhibit,  Lost in The Memory Palace by Canadian artists Janet Cardiff and George Bures Miller.  On our way, we ran into a woman who was a follower of Megan's blog! 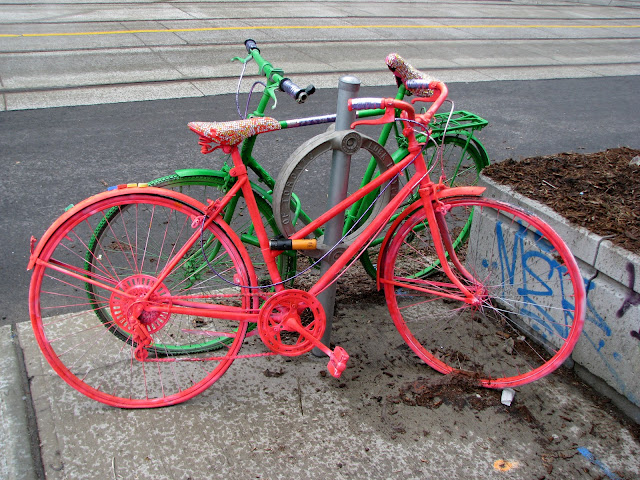 We passed these neon-painted bicycles, part of The Good Bike Project,  where abandoned bicycles are  revamped by local artists and then locked to poles around the city. 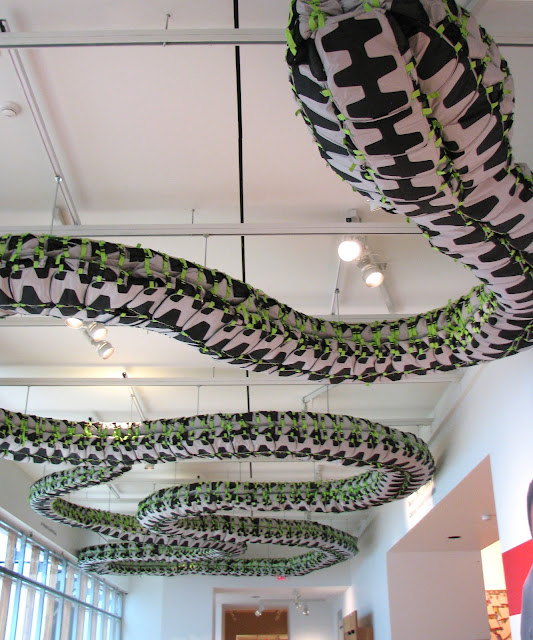 In the entrance to the fourth floor galleries we stopped to take in Ai Weiwei's Snake Ceiling, one of the installations the Chinese artist made commemorating the more than 5,000 children who were killed in the 2008 Sichuan earthquake because they were in poorly constructed schools.  The snake is constructed of 400 knapsacks of various sizes, representing school children of different ages.

I was very excited to see Lost in the Memory Palace, a mini retrospective of sound installations created by acclaimed Canadian artists Janet Cardiff and George Bures Miller.   Janet Cardiff and I spent our childhoods in the same small farming community in Southwestern Ontario, and I have followed her career with pride, and enthusiasm.  Cardiff and her husband, Bures Miller, create works that use sound and voice to break down the distinctions between fiction and reality, and alter your perception of space and time.  The seven installations in the AGO show include The Killing Room (2007), The Muriel Lake Incident (1999), The Storm Room (2009), The Dark Pool (1995) Road Trip (2004), Opera for a Small Room (2005), and my long time favourite, 40 Part Motet. 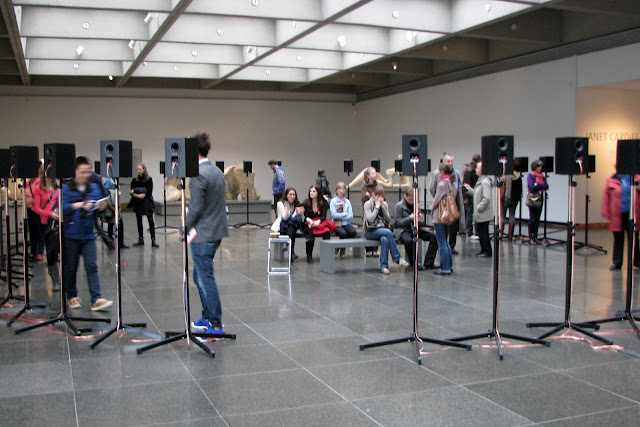 The Forty Part Motet, created in 2001, consists of 40 speakers that have been arranged in an oval in the Henry Moore Sculpture Gallery.  Each speaker represents a member of the Salisbury Cathedral Choir, who have been recorded performing "In Spem Alium" a sixteenth century choral piece composed by Thomas Tallis.  The forty voices were recorded separately, and depending on where you stand in the the room, you can hear one voice's contribution to the whole, or, you can stand in the centre, and be enveloped in a wave of glorious song.   I have experienced this piece in 5 different spaces and it never fails to bring tears to my eyes. 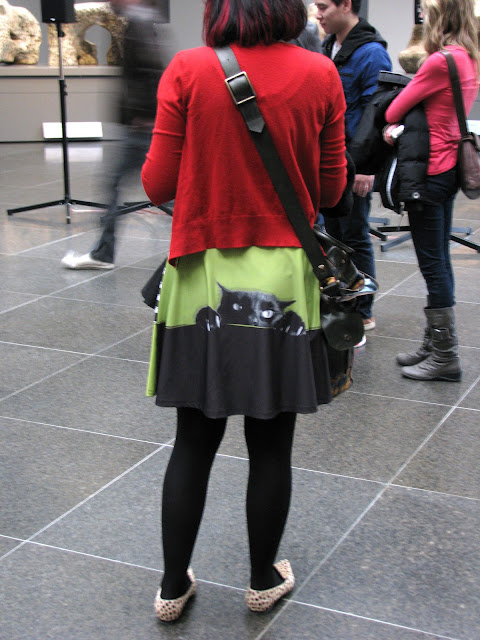 A number of their installations can be somewhat unsettling for the viewer, but The Killing Machine, inspired by the artists' feelings about capital punishment, and Franz Kafka's short story, "In the Penal Colony", is downright sinister.  An open-sided box sits in the middle of a darkened room, containing a dentist chair, covered in a pink faux fur throw held down with straps and buckles.  Two robotic "arms" hover over the invisible prisoner, and a moving megaphone speaker circles menacingly.  The robotic arms are alarmingly human-like in their movements as they alternately examine, and stab their subject.  A revolving disco ball, coloured lights, televisions, and a soundtrack incorporating a melodramatic string arrangement and an electronic guitar being struck by a robotic wand complete the disturbing experience, which is all started when a viewer pushes a red button on a panel.  You can see a video of the installation here.

Suffice to say, their work challenges, entertains, moves, unsettles, baffles, and messes with your head, and that's why I love it.  If you have a chance to see any of their work at a gallery near you, go for it.  Megan and I also made a quick visit to the Patti Smith: Camera Solo exhibit, featuring photographs, personal momentos and a short film by the legendary artist and musician.  I admire her, and enjoy her music and writing, but was left rather cold by the exhibit.  Ah well, if we loved every piece of art we saw, how would we know when something really moved us?


Part 2, featuring the many stylish folk at the Toronto Vintage Show, coming up