When I decided to interview some of the uniquely stylish people I've met in the course of doing my blog, one of the first people that came to mind was one of the young women who appeared in this photo on my blog as part of group of friends who like to dress in the Japanese Lolita style.   Zoe, a Grade 11 high school student here in London, is a creative and self-possessed young woman, with a sweetness that is evident in her style choices.  She studies art and is an aspiring model, and volunteers with the Roller Derby leagues in London and in Woodstock.  I was curious to know more about Lolita style, and how she became a fan.

Have you always enjoyed dressing in unique outfits?

Up until around Grade 10, I was very self-conscious about what I wore and always tried to blend in.   When I got into Lolita and Rockabilly,  I would dress up all the time at school and on weekends. Now I don't dress up as often but I love to put together a simple, cute outfit for school and I leave Lolita for the weekend.  When I get enough dresses, I would love to be a lifestyle Lolita, dressing up all the time. 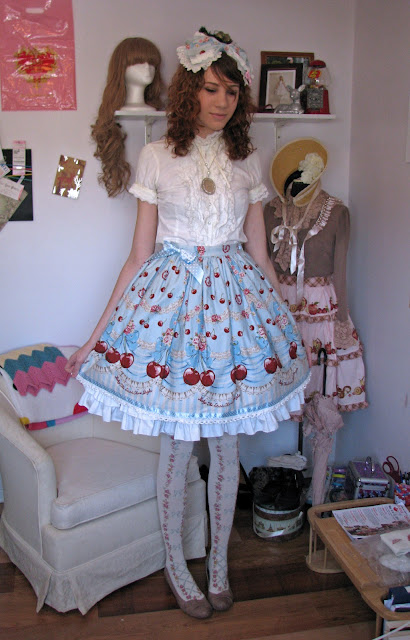 Zoe wearing one of her Sweet Lolita outfits.

Where did you first learn about Lolita Style, and what about it appealed to you?

I used to watch a lot of anime (Japanese animation) and I was really obsessed with Japan.  I was walking through Kensington Market in Toronto with my dad a few years ago, and found a store that sold Lolita dresses.  I fell in love with them - the prints were gorgeous and I loved how poofy and frilly the dresses were, so I had to try one on.  At that moment, I decided I wanted to wear these dresses.  I had ordered my first dress off of Ebay, and didn't really know anything about Lolita, so I thought I had the best thing ever, but later found out that it was more of a cosplay (costume play) dress than a Lolita dress.  I wore a dress from the store in Kensington Market to Anime North, when I met one of my Lolita idols, Cadney.  At the time I was so happy with my dress, but I know now that I looked ridiculous because I hadn't done my research and instead of the real deal, I had an overpriced replica that was poor quality.  At the time I was happy, and felt like I had a moment of fame, but I've since done my research.

Tell me a bit about Lolita Style

Lolita is a fashion subculture that originated in Japan during the 70's of Harajuku.  It's inspired by the Victorian and Rococo era, with a bit of 50's, and was completed with some child-like attributes. In the 90's Lolita started to be seen overseas and now there are hundreds of Lolita communities all over the world, the largest being EGL on Livejournal, which is an international community where Lolitas from all over the world can communicate.

There are three main styles of Lolita: Sweet, Classic and Gothic.  Sweet Lolita has more cutesy prints, such as pastries, cats, flowers, fruit, and usually has a theme. The skirts of the dresses are a bell or cupcake shape, knee-length, and are very poofy.  The colour pink is a large part of Sweet Lolita.  Gothic Lolita is the opposite of Sweet with prints that include crosses, bats and other creepy themes.  The colours are dark with a lot of black, and the dresses are either bell, or A-line shaped.  Classic Lolita is mid-way between Sweet and Gothic.  Dresses are usually a bit more modest, with a longer length and A-line shape.  The colours are more subtle than Sweet Lolita, and although some have prints, there are dresses that are solid colours and quite plain with simple ribbon or lace detail.   There are many substyles of Lolita as well, and both girls and boys dress in Lolita. 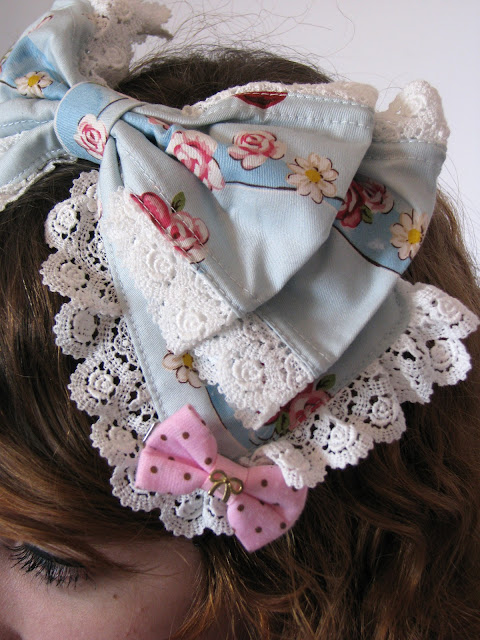 A Lolita outfit includes a headpiece (bonnet, bow, crown, etc.), a blouse, a proper dress that is big enough for petticoats, bloomers for modesty, socks and a pair of shoes.  Mary Jane shoes styles are popular. 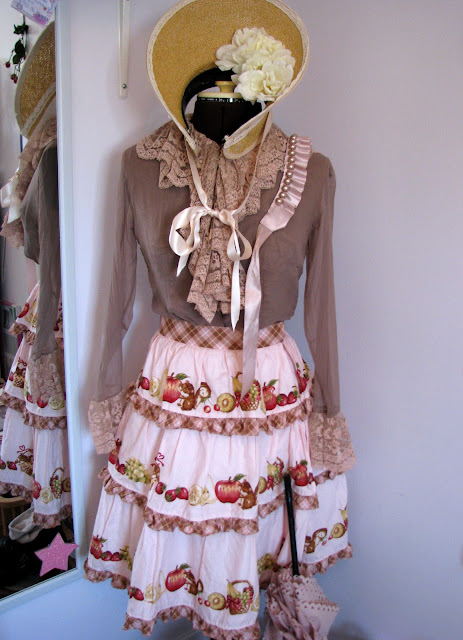 This outfit on display in Zoe's room incorporates one of her favourite skirts.  She found the blouse at The Sentimentalist


Where do you get your Lolita outfits?

I buy my outfits online, but I rarely pay retail price; I always wait for sales or for something to be sold on EGL Sales, which is a Lolita sale community on Livejournal.  Lolitas from all over the world sell things there, whether it's a brand dress they are re-selling, or a dress they made.   Most of my dresses are from Innocent World, which is a Classic Lolita brand.  I make a lot of my accessories, but I don't know how to make any dresses (yet).  I also get a lot of things from vintage stores and thrift stores, and a few dresses that I have purchased at regular stores as well.  My friends in the Southern Ontario Lolita Community also trade and sell some of our dresses.

When you dress in Lolita Style, do you feel that you are taking on a different persona, or is it just another aspect of you?

This is one of my favourite parts of the fashion;  when I wear it, I feel amazing - I feel like myself!  When I am not wearing Lolita, I feel plain and boring.  I love dressing up, and every outfit I wear reflects my personality.  Sometimes when I wear Classic, I will have a big bonnet (like the one in the photo above) and be very over the top.  When I wear Sweet, I like to be a bit more subtle - I'm not a fan of the prints with teddy bears and toys. 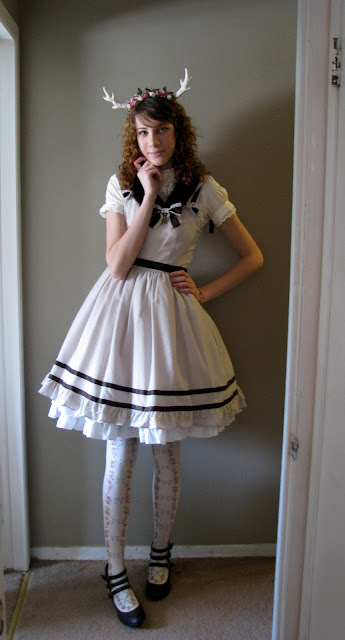 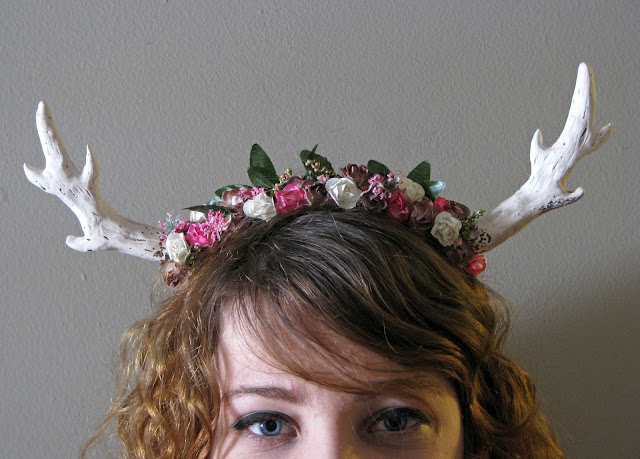 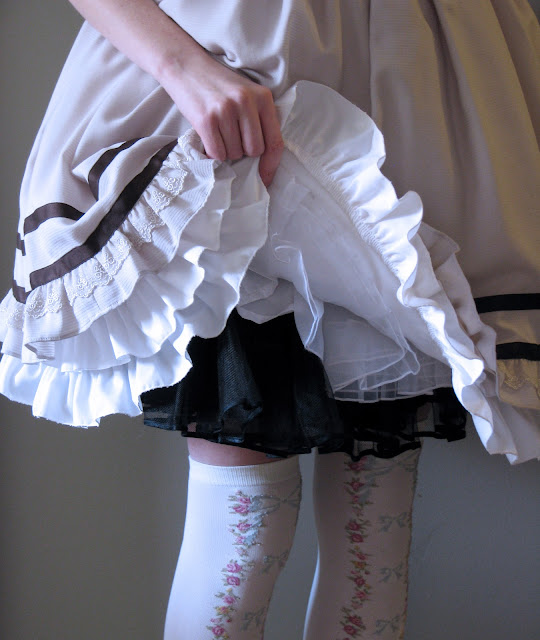 
How do strangers react to you when you are dressed in Lolita?

I've been wearing Lolita for almost two years now, and sometimes I'm still nervous to leave the house because of some situations, but there are definitely more good reactions than bad.  When our London community has meetups, we always have people staring at us.  Sometimes people will come up and ask why we are dressed this way, or ask to take our photo, and a lot of the time people won't even ask and just take photos.  (Note from me -  this is rude folks, if you want to take a photo of someone, ask them first)

I've had people yell at me and insult me when I've been dressed up, and sometimes will make rude comments about how "It's not Halloween yet".  When I am at meetups in  Toronto I take the subway and sometimes we get people asking how old we are.  I've heard some horror stories too, which scare me a bit, but over all we get so many nice comments, with people wanting to know more about the fashion so the negative comments don't frighten me away.

When I posted the photo of you and your friends dressed in their Lolita outfits, a few of my followers commented that they thought that the concept of Lolita style was creepy (we can thank Vladimir Nabokov for that) and they couldn't understand why a young woman would want to dress like a little girl

It's pretty common to hear things like that.  Lolita is very different and hard for people to understand.  We like being different and looking like dolls, but not children.  Dressing in this style does not change our ages or our views, and in no way do we feel like children.  If people find it creepy, well, everyone is entitled to their opinion. 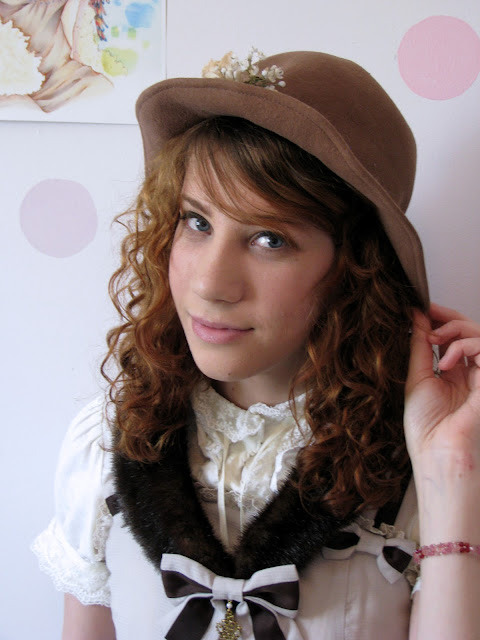 One of Zoe's favourite hats


Has the Lolita Style aesthetic affected other aspects of your life?

It has had a big impact on my life.  I try to make everything cute - my bedroom is completely Lolita-fied!  I listen to a lot of Rococo, classical music, and music from Japan.  I have a soft spot for French culture too.  I like to go out and have tea and eat sweets.  There are a few movies from Japan in which Lolitas are the main characters, like Kamikaze Girls.  I do listen to "normal" people music and watch Hollywood movies too.   I like to craft and sew and some of my art is Lolita-inspired.

So it sounds like dressing in Lolita Style has had a positive effect on your self-confidence....

I used to have severe anxiety, and was always too nervous to dress up.  Lolita helped me gain so much more confidence and I started to feel better about myself.   When I dress up and walk around, I  kind of like the the attention I receive because it makes me feel unique and confident enough to do something so different.  Lolita makes me feel good about myself, and lets me be who I want to be.  I would never want it to be any different!

Thanks so much to Zoe for her time and willingness to share information and thoughts about her style
Posted by Forest City Fashionista at 5:33 PM