The Calls Are Coming From Inside the House!

Yeah, I know....this is not exactly a "feel-good" post for the holiday season, but it is nonetheless, seasonally appropriate, and was inspired by the guilty pleasure of watching the Canadian horror film, Black Christmas on TV the other night.

I am not a fan of slasher flicks like Halloween or other similar gore fests, but for some reason I have a soft spot for Black Christmas.   The film was released in Canada in 1974, and was one of the first, if not the first, slasher movie, and many directors and writers have since gone on to borrow heavily from the plot devices of the film.   It was filmed in Toronto and directed by Bob Clark (who went on to direct the holiday favourite "A Christmas Story with Ralphie and his Red Rider BB Gun), and featured actresses Olivia Hussey, Margot Kidder (who went on to play Superman's girlfriend) and Andrea Martin, who would later shine as a member of the famed Second City comedy troupe.  The plot was simple - a group of young women living in a sorority house are terrorized by a demented serial killer who picks them off one by one and follows up each murder with an incredibly creepy telephone call.  It's cheesy, and is chock full of what have since become classic slasher film cliches.   The 1970's clothing is pretty awesome, including the gorgeous fur-trimmed coats. 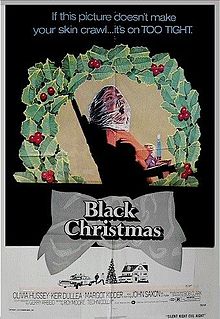 This was the original poster for the film, which I remember from my high school days, especially the tag line... 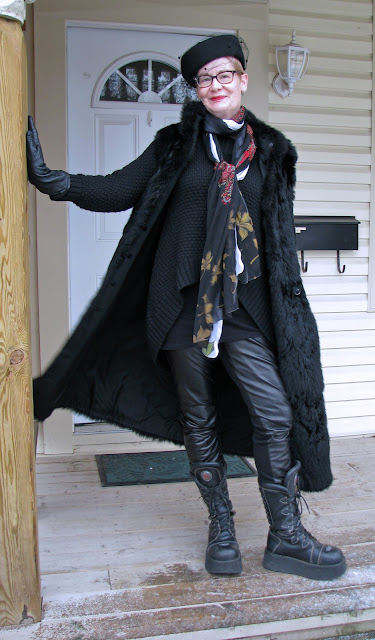 I decided to put together a Black Christmas-inspired outfit to brave the cold and bitter wind yesterday to run errands that included some fur, and my ass-kicking boots.
50's hat - The Sentimentalist
sweater and boots - From Mars
leather and fabric leggings (a winter staple) - Danier leather
scarf and fur vest - Mesh Consignment boutique

So far it looks like we'll be having a grey/green Christmas here, unless there is an unexpected dump of snow before Tuesday.  I wish all of you a safe and happy holiday, with good food and good company!
Posted by Forest City Fashionista at 3:40 PM