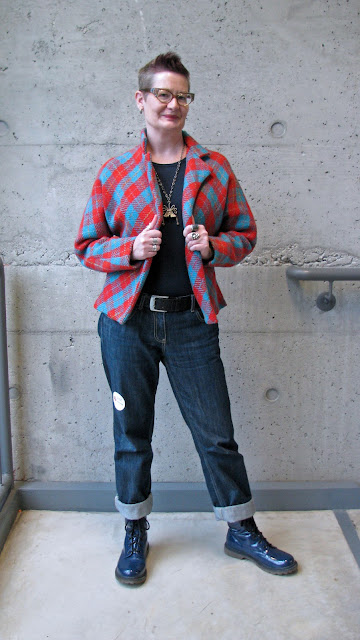 When I got a friend to take the photo of me in the outfit above, it was to show off my birthday jacket, but upon closer inspection, I realized that everything I'm wearing (except for the t-shirt under the jacket and my underwear) was purchased second hand, even my glasses frames.

For Fanny Brice, and for most people growing up in decades previous to the 1970's, wearing hand-me-downs was a sign of poverty and lower social class.   Given that people used to wear their clothes until they fell apart, or outgrew them, there probably wasn't much that was handed down in pristine condition.  I supposed that in some people's minds, anything that is "used" will always have a negative connotation, but for me, and for most of my friends, a trip to the nearest Value Village, Goodwill, or vintage store, is part of our regular routine.   I continue to buy basics like t-shirts and turtlenecks, and most of my shoes, from retail stores, but the majority of my jackets, coats, and dresses were owned by someone else before I got them.  Far from being ashamed of wearing my purchases, I am very appreciative of the well-made, and well-priced items I have collected over the years and I am always curious about the stories of the previous owners. 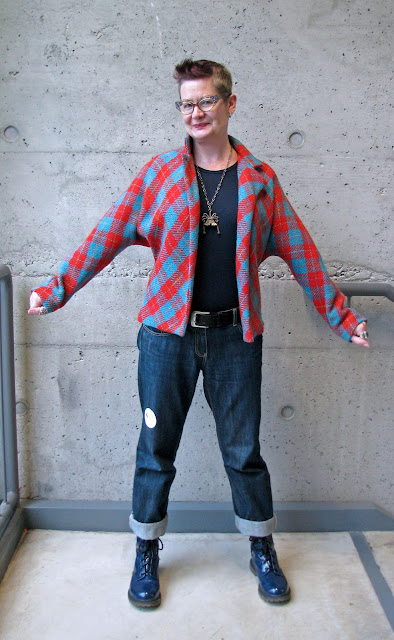 * Funny Girl was one of my favourite films when I was a kid, and I own the movie, and the soundtrack, on vinyl, no less.
Posted by Forest City Fashionista at 1:12 PM