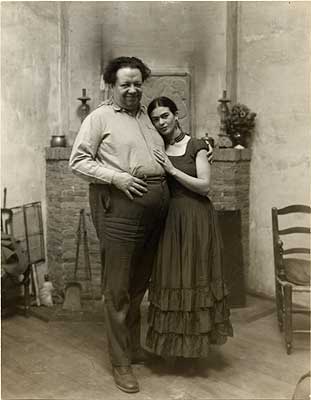 Frida Kahlo and Diego Rivera in the studio of sculptor Ralph Stackpole, San Francisco, 1931. Photograph by Peter A. Juley & Son.

This is the life-sized photograph of Frida Kahlo and Diego Rivera that greets visitors to the exhibit, Frida and Diego: Passion, Politics and Painting, currently on  display at the Art Gallery of Ontario in Toronto.  It was my birthday this weekend and my gift to myself was the trip to see the exhibit, which features 80 works on paper and paintings by Mexico's most famous artist couple.

A controversy erupted in the media over a three-day marketing promotion that offered visitors to the gallery a discounted ticket price if they allowed themselves to be photographed wearing a Kahlo-inspired stick-on unibrow.   Initially, this had all the makings of a sexist marketing gimmick that reduces a talented artist and fiercely intelligent woman to the sum of her eyebrow(s), but when taken into context that Kahlo herself was very proud of her gender-ambiguous image, including her heavy brows, her "moustache",  and occasional dressing in men's clothing, the tempest loses some of its force.  I was honestly surprised that it warranted a debate on CBC Radio.  If it got a few more people in to see the show, all the better.  I'm sure the promotion would have been less politically charged if  visitors had been given the option of dressing in a Diego Rivera fat suit. 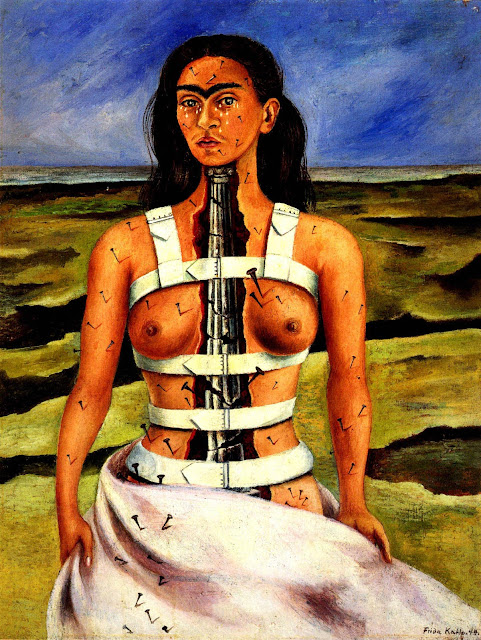 I was familiar with much of Kahlo's work and her story prior to seeing the exhibit, but not Rivera's work outside of his large murals.  I was surprised to see what a talented portrait painter he was, and that he had worked in several painting styles including cubism and impressionism.  It is a wonderful show, consisting of works from three Mexican private collections, and I was particularly happy to see two of my favourite Kahlo paintings, "The Broken Column" (above), and"Self-Portrait With Cropped Hair" were included. 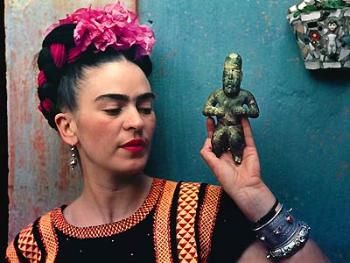 
The exhibit included some stunning colour photographs of Kahlo by Nikolas Muray, with whom she had an on-and-off ten year relationship, that showed just what an incredibly striking woman she was.  I think she was gorgeous, with her dark hair and brows, and the indigenous Mexican clothing, jewellery, and hair adornments she favored,  I know many of my fellow bloggers are also quite taken with her art, and inspired by her style.  I had done a Frida-inspired outfit post back in the summer. 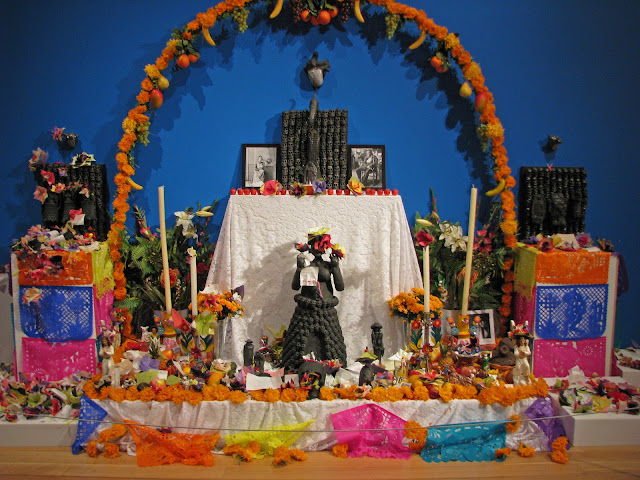 I was able to take a photograph of this ofrenda, or altar, that was commissioned by the gallery from Mexican artist Carlomagno Pedro Martinez.  Altars like this one are traditionally constructed in Mexico to honour the dearly departed and to provide a place for people to leave personal offerings to the dead.  Visitors to the Kahlo/Rivera exhibit were encouraged to write messages on paper flowers that they could then leave on the altar.  I had a small figure of the Virgin of Guadalupe that I brought with me to add to the offerings. 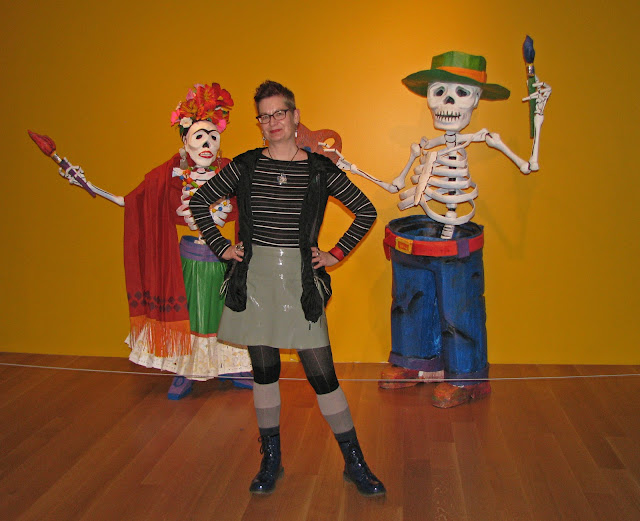 There were also some large paper-mache figures on display near the altar that included three very large "Judas" figures, and these Frida and Diego catrinas (well-dressed skeletons).  The figures were created by a Toronto-based theatre company, Shadowlands, that incorporates masks, puppets and live music into their productions.  As a fan of the costumed skeletons that are part of the Mexican Day of the Dead celebrations,  I had to get a photo with them. I was wishing I had worn some bright colours instead of black and grey.

The exhibit continues at the Art Gallery of Ontario until January 20th, 2013.  A personal side note - the gift shop connected to this exhibit is one of the best ones I've ever seen.  They have everything a Frida Kahlo fan could ever want, including a magnetic Frida dress-up doll that has taken over the door of my fridge. 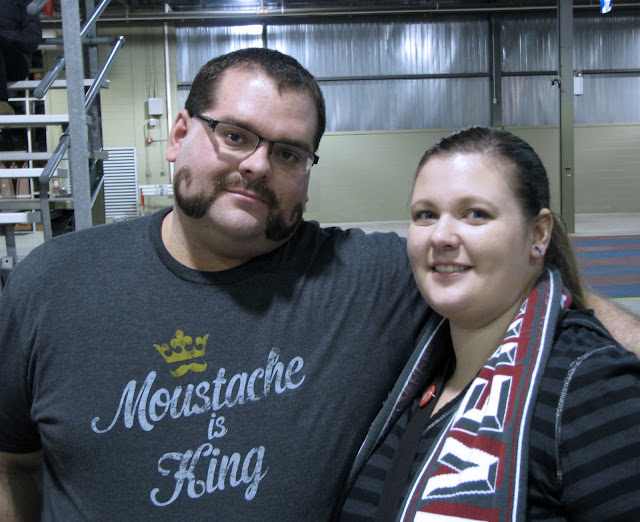 Saturday night, I went to the Roller Derby game at the Western Fair Agriplex.  The theme of this particular bout was "Movember Pain", in tribute to the month where men grow moustaches to raise funds and awareness for men's health, including early detection and treatment of prostate cancer.
There were many moustaches present, on men and woman (the stick-on kind) and there were prizes given for the best "stache".  The guy in the photo above won the prize for the men, and rightly so. 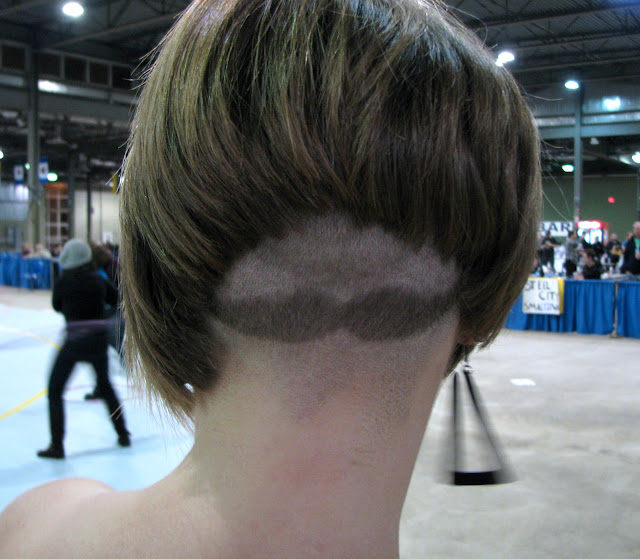 Some of the women had found rather creative ways to show their support for "Movember", including this one who had her hair stylist shave a "moustache" into the back of her hair. 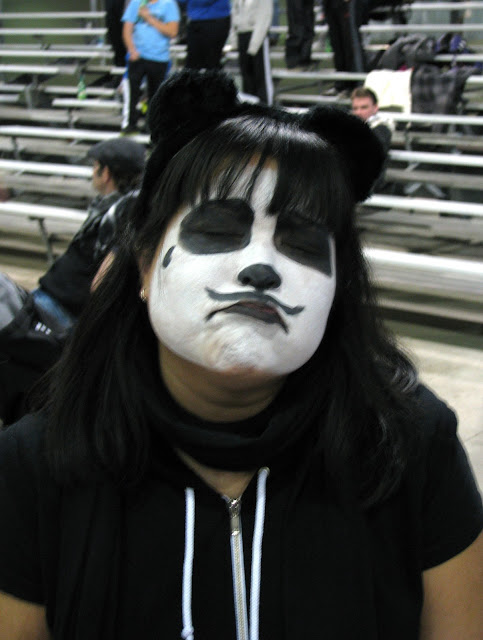 One of the game's officials, in her "Sad Panda with moustache" makeup 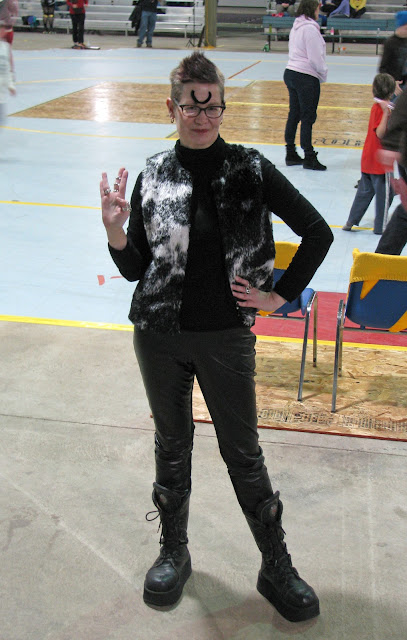 I started out the evening with a moustache (it was the "Toulouse Letrec" model, according to the package) but everytime I spoke, it came unstuck, so it ended up on my forehead, after which I was told I looked very "Vulcan".   Live long and prosper, my friends.