Grab Your Coat and Get Your Hat.... 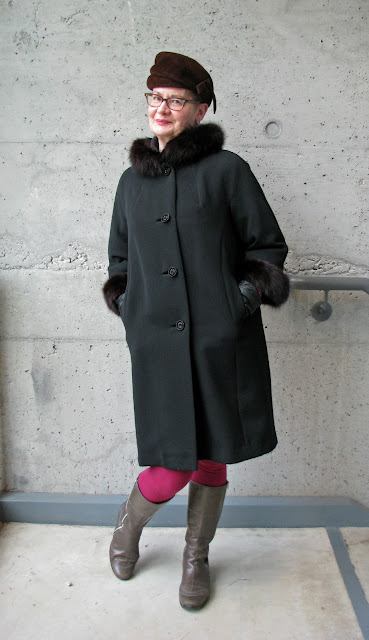 It's easier to leave your worries on the doorstep if you're wearing a pretty vintage coat and hat.   The coat was a gift from a friend who thought I was one of the few people he knew who would appreciate it.  The hat was purchased from the David Owens booth at the Manhattan Vintage Show. The hat is from the "DEBS" collection by Lilly Dache, a french-born American milliner who was one of the most famous hat designers in her time.   I had tried on a number of hats in bolder colours and styles, and this one seemed rather drab by comparison, but when I tried it on, I knew it was a hat that I would wear frequently because of its classic and flattering shape. 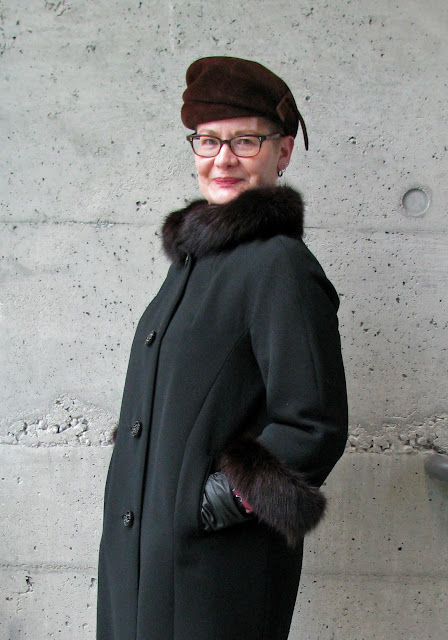 The shape and details of the coat are more overtly feminine than what I'm used to wearing, and it makes me feel rather "lady-like", at least on the outside....

The label inside the coat reads "Designed by Louis Manley Toronto" (made in Canada, Yay!!)  The lining is in perfect condition, and the fur trim on the collar and cuffs is still soft and luxurious so it was obviously well-cared for.   The buttons that were used on good quality coats of past decades were often works of art in themselves, and these ones are no exception, with a circle of black sparkly stones in the centre of each button.

A number of my fellow bloggers have been posting about wearing hats lately, including Amber, of the blog Butane Anvil and Judith over at Style Crone.  Jean and Valerie, otherwise known as The Idiosyncratic Fashionistas, have been instrumental in nurturing my affection for hats and I was fortunate enough to be able to participate in their "rotating hats" project when I was in New York.  Check out this post on their blog to see four talking heads (one of them mine) in eight different hats.
Posted by Forest City Fashionista at 9:37 PM