I've been trying to get this post done for three days, in order to complete my New York series, but I brought back a wretched cold from the Big Apple which has been having its way with me for the last week and just when I thought it was gone, it smacked me down again....

When I visited New York last year,  I had been given a recommendation for an inexpensive place to stay, called Leo House.  Leo House is a Catholic Guest House (the website describes it as a "quiet Christian Guesthouse) that has been around since the early 1920's, offering affordable accomodations to travellers of all faiths, (or none, as the case may be).  It's not fancy, in fact, it can be downright shabby, and if you have a strong adversion to crucifixes, pastels and floral prints, you may want to stay elsewhere, but both times I stayed there it was clean, safe, and the staff, which include lay people, and The Sisters of St. Agnes, were polite and efficient.  And they have a great breakfast buffet Mondays - Saturdays for $9.  The best thing about it is the location, which is right in the heart of Chelsea, which is a neighbourhood located on the West side of Manhattan, bordered roughly by 14th Street to the South, 30th Street to the North, the Hudson River to the West and Sixth Avenue to the East.

Prior to staying at Leo House I didn't really know anything about Chelsea, other than it was the home of the famous Hotel Chelsea, where a great many artists and musicians lived and worked. 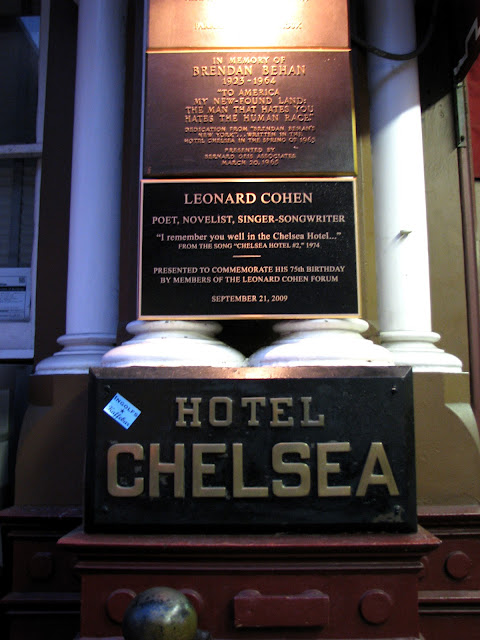 As a long-time fan of Leonard Cohen, I was happy to see his 75th birthday commemorative plaque mounted by the front door

Chelsea is mainly a residential neighbourhood, which for me is a major part of its appeal, and it has a large gay population.   It is also home to many art galleries, ethnically diverse restaurants and businesses, and the beautiful High Line Park. 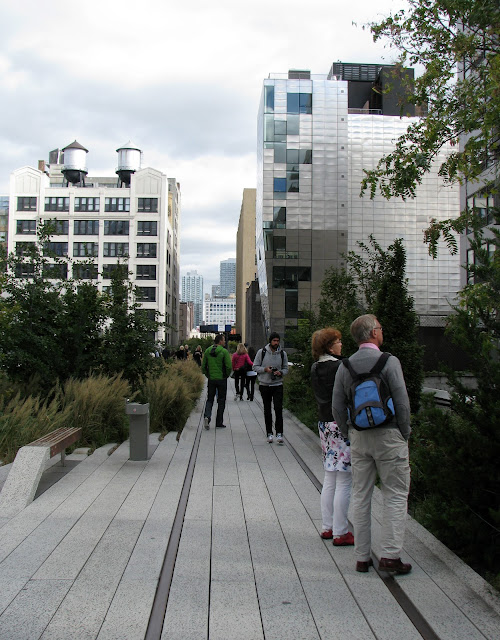 The High Line park, built on no longer use  elevated rail train tracks, provides a quiet, plant-filled oasis from which to view the city streets below. 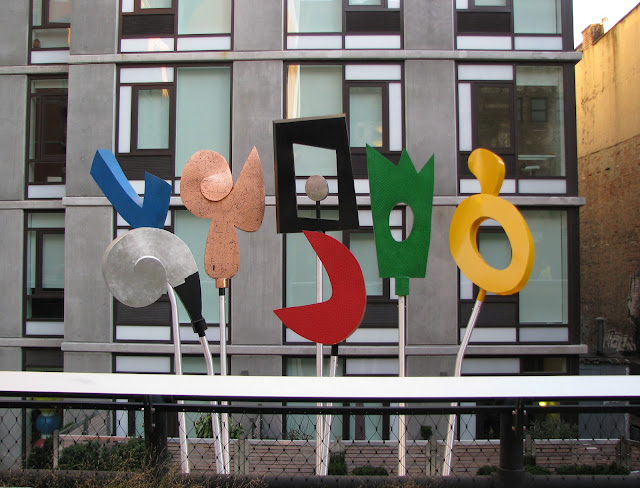 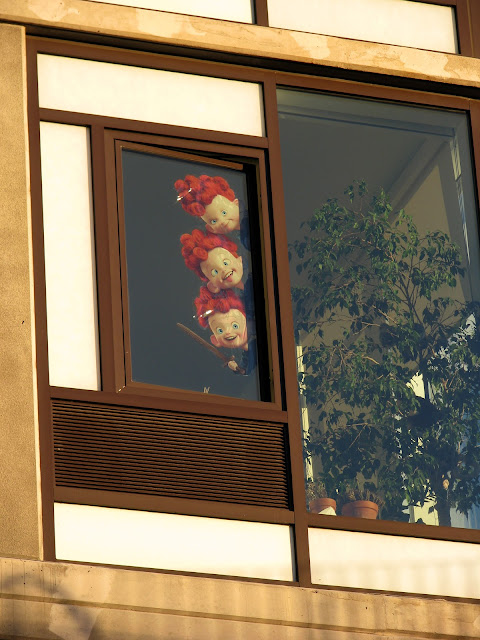 I fell in love with Chelsea from the moment I stepped out the front door of Leo House on my first morning in New York last year, and found myself blending right in with the sidewalk traffic of people heading to work and walking their dogs.  It's far enough from Time's Square that you don't have to contend with hordes of tourists, and it has become my home away from home.   The businesses reflect the ethnic diversity of the neighbourhood, and within a block of my hotel I could see a movie, have my palm read, get a fresh-baked brownie, or..... 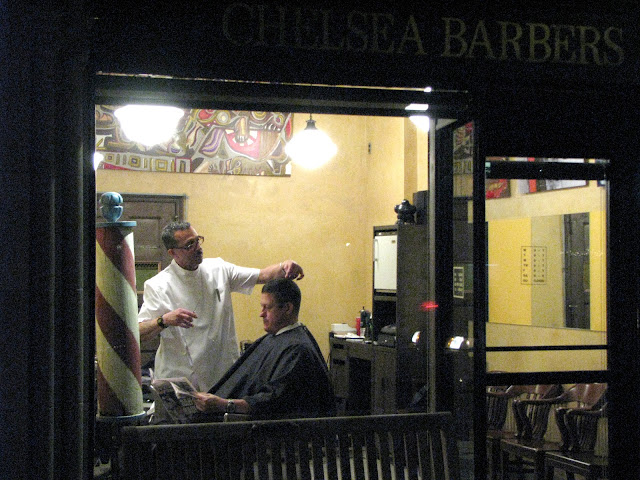 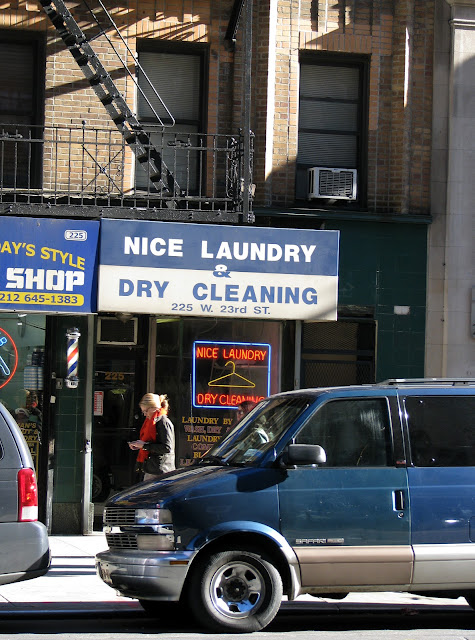 How could you not want to live in a neighbourhood that has a Nice Laundry? 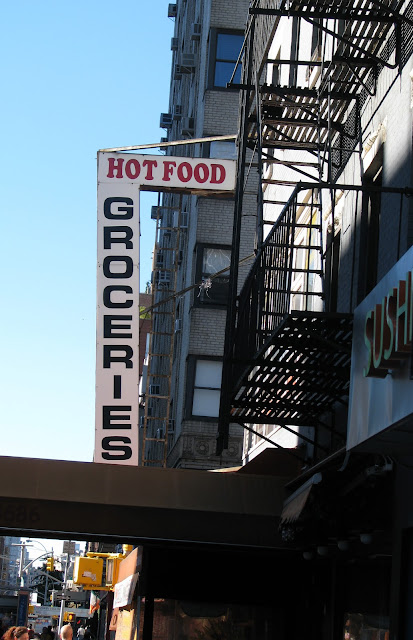 or a place that has hot food AND groceries

I've discovered that many New Yorkers don't cook at home much, and really, when there is such a variety of great food (some of it very inexpensive) just outside your door, why would you? This is another reason why I think I would make the perfect New Yorker.  Chelsea is home to some great restaurants, and I had time to try four - The Red Cat, The Rocking Horse Cafe, Cafe Champignon (photo below) and Cafeteria. 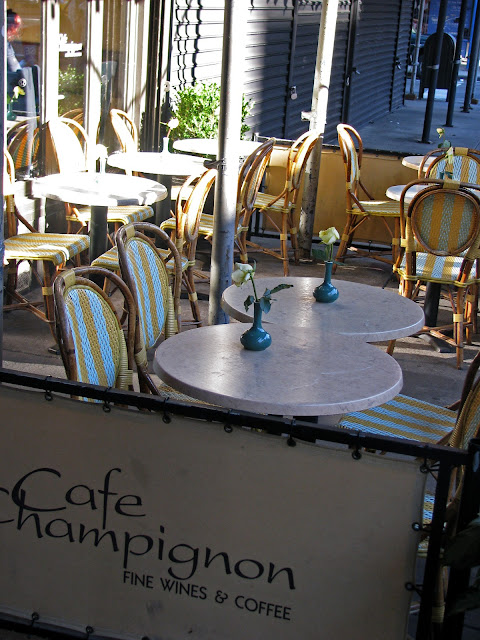 Cafe Champignon was a little bit of Paris in the heart of Chelsea, where The Style Crone and I had a lovely dinner, to the accompaniment of some classic soul tunes 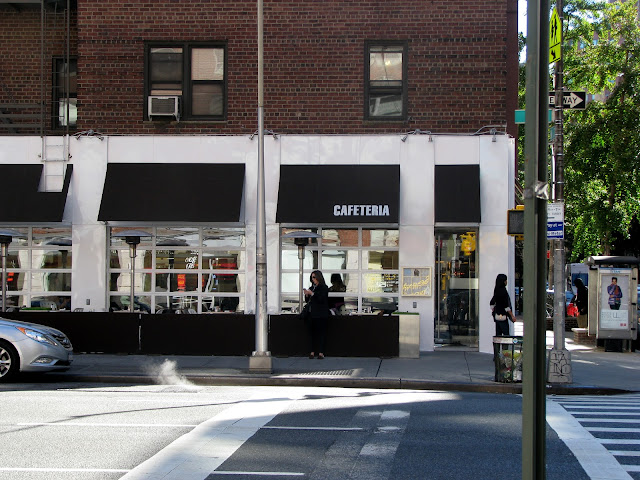 The uber-cool Cafeteria, open 24 hrs, where the Idiosyncratic Fashionistas and I were treated like royalty by the wonderful staff 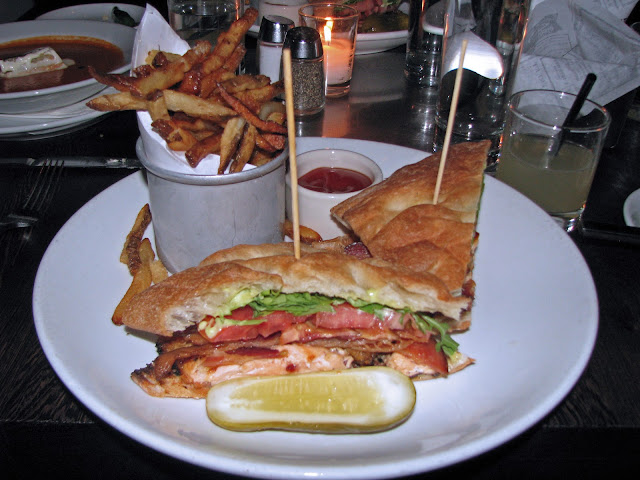 I had the most delicious grilled salmon BLT, accompanied by a "Rude Margarita" 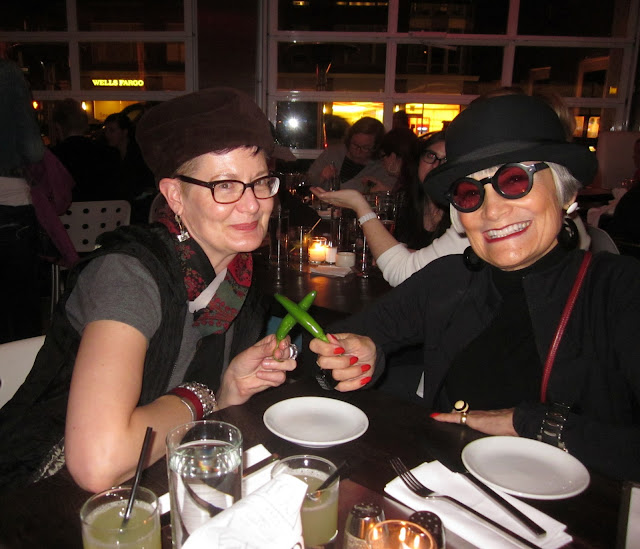 I also discovered on this visit that Chelsea has a Salvation Army Thrift store, where I scored pristine copies of the first two Babar children's books (hardcover, no less) for a fraction of the $23 cover price, and a home made dress, most likely 1940's, for $13, which I promptly wore the next day.  I also investigated the local Housing Works thrift store, part of a chain of thrift stores in New York whose profits go towards providing support and services to people living with AIDS and the homeless.   There was some fabulous stuff, including high end label clothing and handbags, and prices were high for a thrift store, but not when you considered the quality of the items.  I found a pair of doc marten-style boots, in navy blue patent, for $15, and a no label black dress that will very likely become a wardrobe staple, also for $15.

In case you were thinking I must have been commissioned by the Chelsea tourism board (if there was such a thing) to write this, it's not the case.   I really do love the neighbourhood, and if circumstances ever were such that I could move to New York, I would be delighted to become a full-time Chelsea Girl!
Posted by Forest City Fashionista at 4:52 PM