In addition to the creativity that was on display from the young Canadian designers who had been chosen as finalists in the Art of Fashion 2012 Design Competition, there was a lot of sartorial eye-candy amongst the invited guests.  I had the pleasure of meeting another blogger, a milliner, a t-shirt designer, and a young man whose fierce style I had admired for some time. 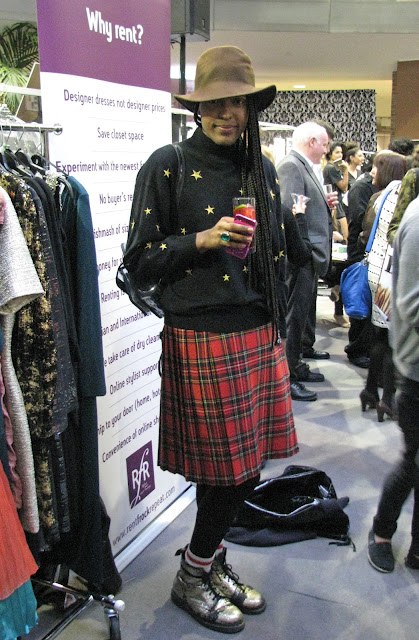 The kilt, the boots, the hair, the hat - there was no way you could miss this guy.  He definitely triggered an "Oh Wow!" moment. 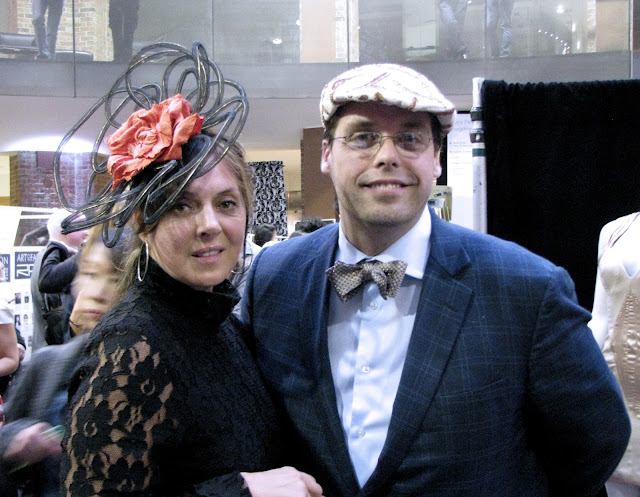 David Dunkley, on the right, got my attention with his sartorial smarts and his charm, and when I learned that he had designed the fascinator worn by his friend, with his millinery talent.  The award-winning Toronto milliner studied with the former royal milliner to Her Majesty Queen Elizabeth The Queen Mother, and his hats have been worn by members of the Queen's royal entourage.  You can see more of Dunkley's gorgeous hats and fascinators on his website here 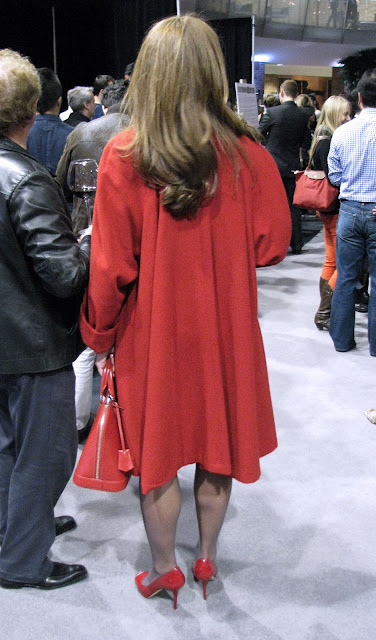 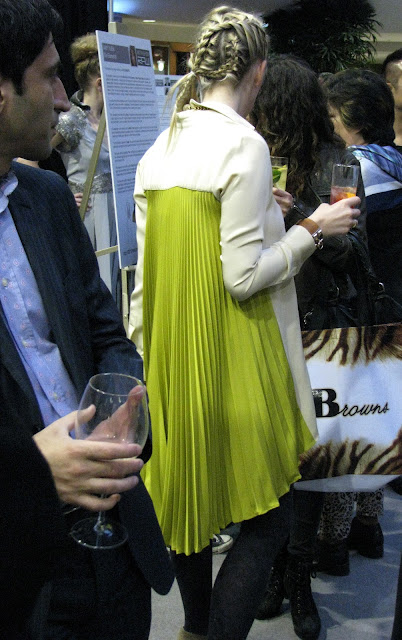 This woman's dress was designed by a friend - I really liked the "business in the front, party in the back" aesthetic that was continued in her hairstyle. 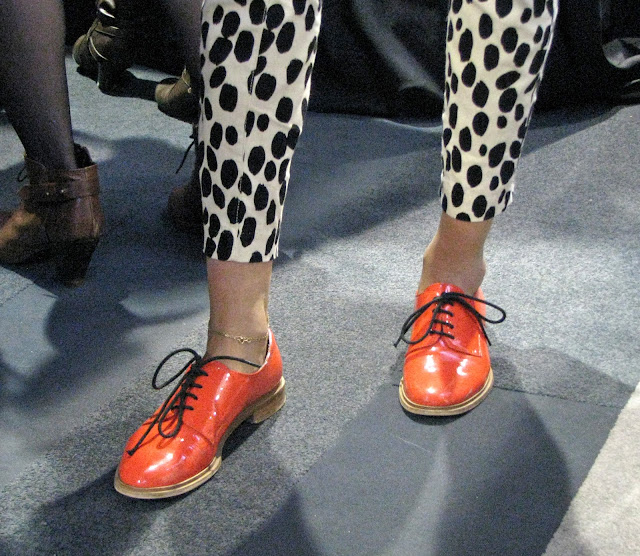 My favourite shoes, perfectly paired with black and white 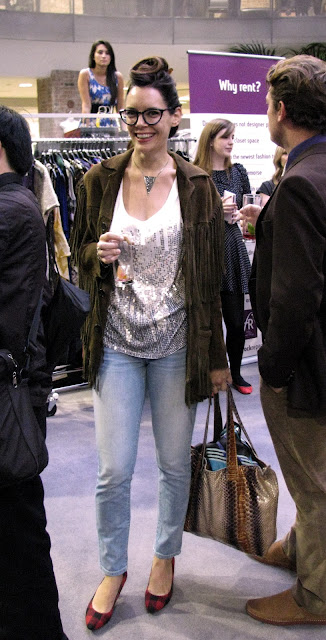 I love how this woman, a fellow blogger, mixed classic casual pieces to make an outfit that was incredibly chic, and was a welcome visual break in the sea of black.  Her super cool glasses (they were dark blue which doesn't show up in the photo) and swirled topknot gave the impression that she was fun and approachable, which to my delight, she was!  I hope she sees this and sends me the address to her blog.

I have been crushing on this young man's fearless style since I first saw his photo on the street style blog TorontoVerve, so I was thrilled to see him in person.  Turns out he's just as sweet as he is stylish.  His name is Myles Sexton, and he's a makeup artist, aspiring model and jewellery designer, and even has his own YouTube Channel.  He's wearing a necklace of his own design - see the closeup below: 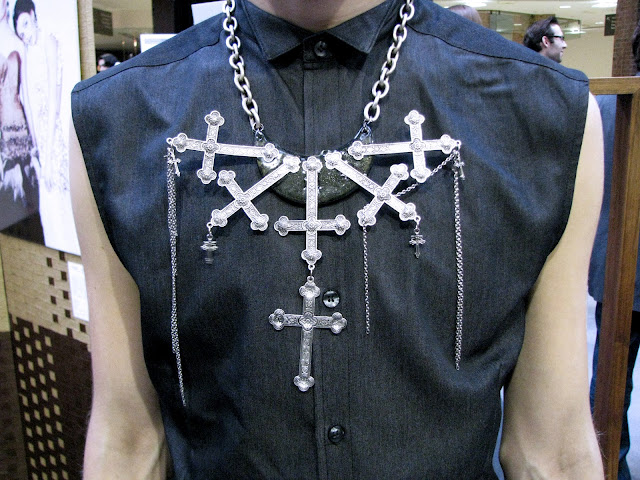 See more of his jewellery designs on his website 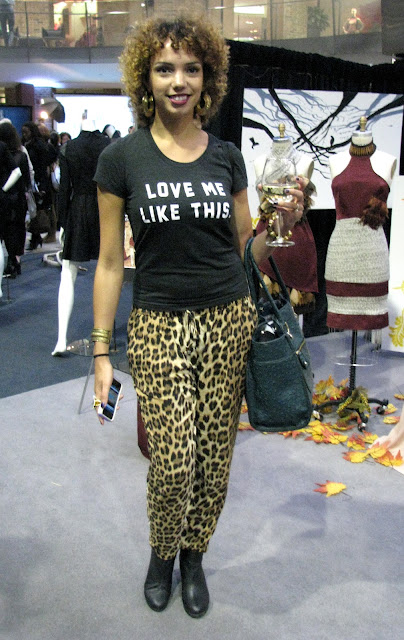 This young woman and a friend have a t-shirt design business called Global Warming that creates "t-shirts with a voice".  The shirt she's wearing is one of their designs, and others feature strong and sassy messages such as "I'm Ridiculously Smart" and my personal favourite,  "My Hair Doesn't Like To Be Touched By Strangers".   Her cute curls and gold hoop earrings looked great with the leopard print pants. 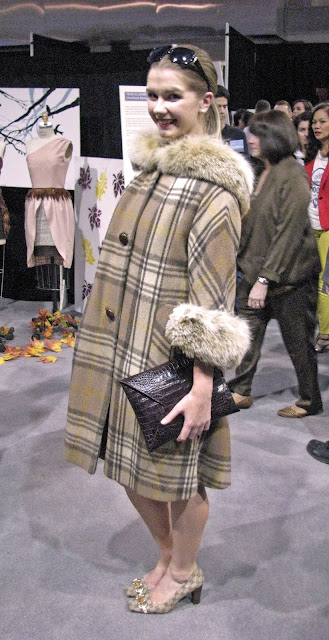 I was just getting ready to call it a night when I saw this lovely young woman, who was the epitome of  "lady-like" with her fur-trimmed vintage coat, designer heels and stunning envelope bag.


Thanks to the Art of Fashion for the invitation to this event, and hopefully I will be able to post a photo of what I was wearing if any of the people who photographed me are kind enough to send me one!
Posted by Forest City Fashionista at 10:42 PM