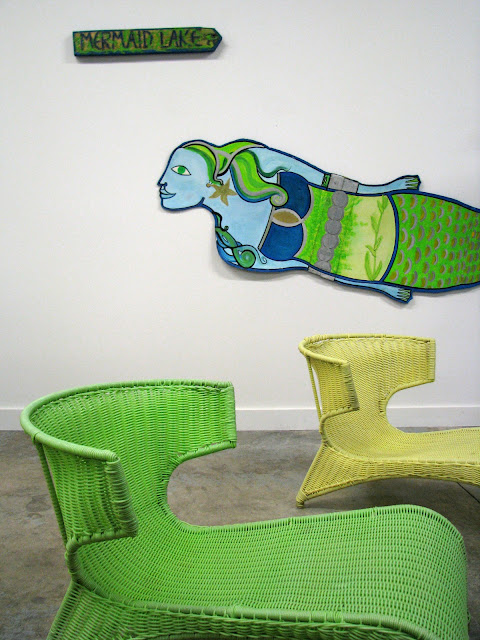 A sign, a mermaid and a couple of brightly coloured wicker chairs invited the guests at the opening of artist Maureen Riley's new show to visit Mermaid Lake. 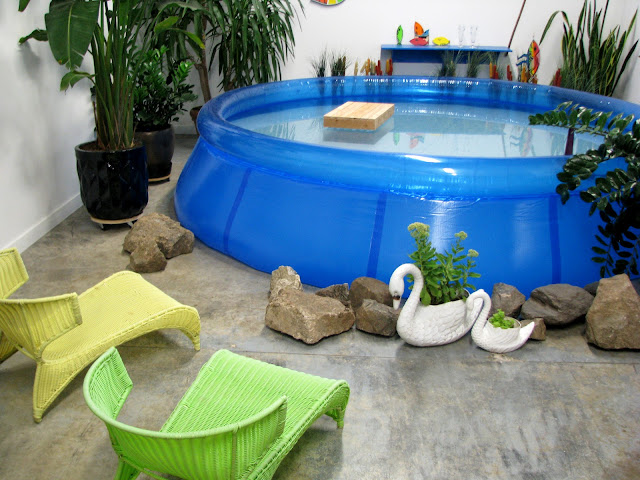 The lake, which had occupied Riley's backyard, was the centrepiece of her show that opened last night at Strand Fine Art Services.  One of the other attendees commented that if this was the 1970's, the women would likely be splashing about in the pool, most likely topless.   I checked the water, and it was a bit chilly for that.  Riley's gorgeous paintings have incorporated mermaids, goddesses and other mythological creatures for many years, and this show was a mix of some new work and some older pieces, not all of them specifically mermaid-focused. 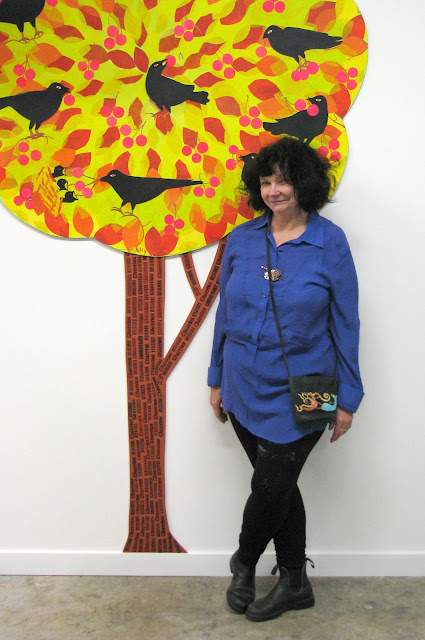 The artist, posing beside her piece titled "Birds in the Delicious Cherry Tree" 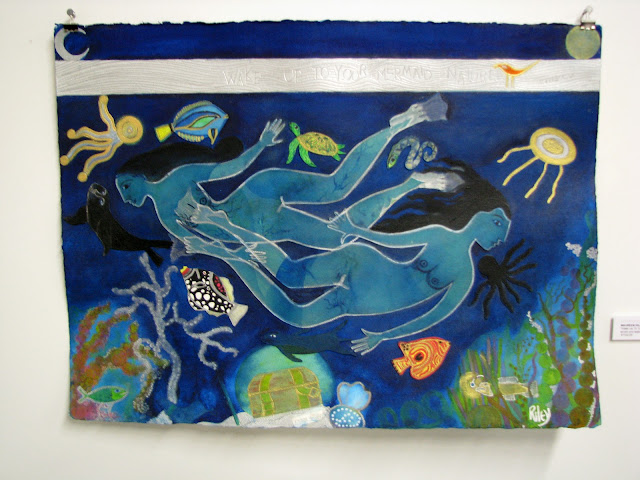 One of the pieces in the show, titled "Wake Up To Your Mermaid Nature".  I've always loved Riley's use of bold, jewel-like colours.  Her work is also incredibly joyful, celebrating women, creativity, friendship, sexuality and love. 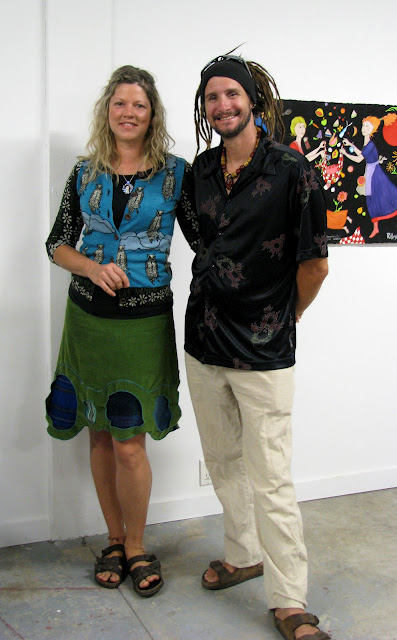 Riley is a long-time and well-respected member of London's art community, and her art, and her delightful personality have earned her a large following, so there is always a crowd of interesting people at her shows.  I was completely enamoured with this woman's skirt, which she bought at a secondhand store, and her owl printed cardigan, from one of my fave stores, From Mars.  He was no slouch in the style department with his dreads, chunky necklace, and dragon print shirt. 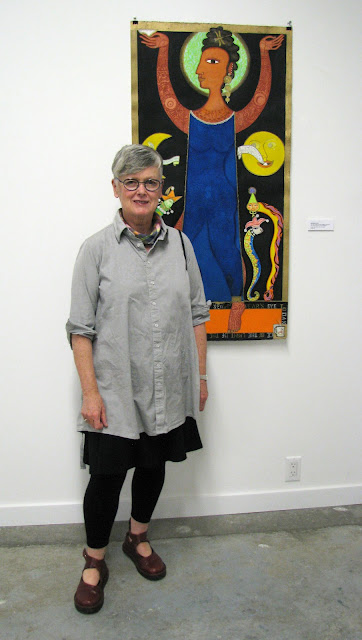 City Councillor Judy Bryant, an avid supporter of the arts in London, wearing some very funky shoes.  I'm kicking myself for not asking her where she got them. 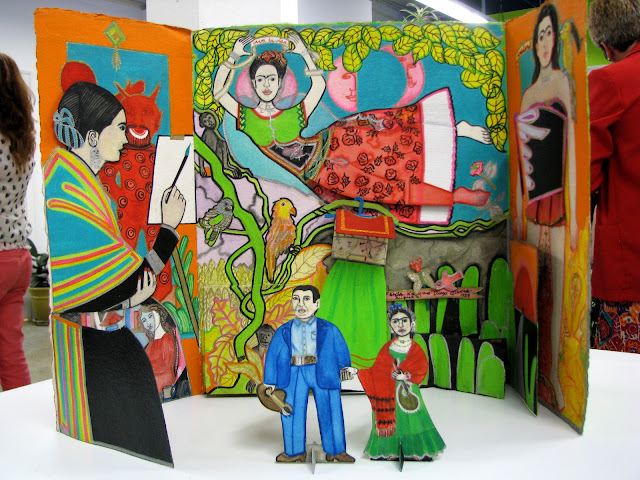 Frida Kahlo is another one of Riley's inspirations and the two Frida pieces in the show, including the mixed media collage/triptych above, were, as I said to Riley, "Freaking Awesome!" 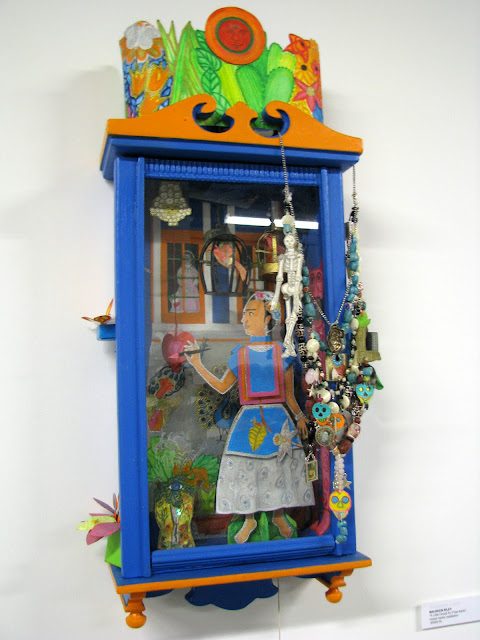 This piece, titled "A Little House for Frida Kahlo" was my absolute favourite.  There is so much going on that you can stare at it for hours and feel like you haven't taken it all in.  If you pull the string that hangs from the bottom of the box, Frida's arm moves as if she is painting.  I would kill to be able to wear the necklace of skulls and charms! 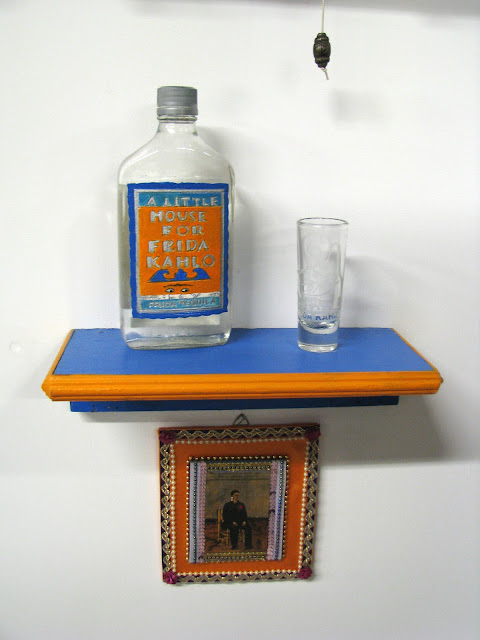 This shelf, with liquor bottle, glass (with the image of Kahlo etched on it), and portrait of Diego Rivera below, was also part of the piece 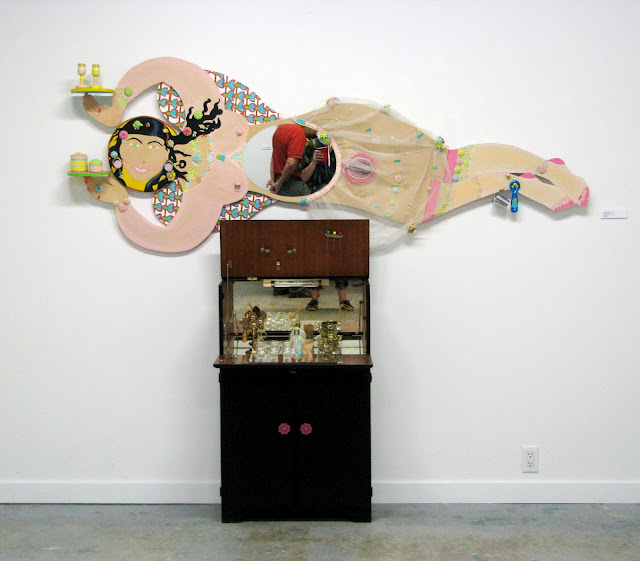 This piece was a close second for me in my list of "what I would buy" from the show.  This fabulous Bar Girl was an older piece, and had hung in the entranceway of Riley's former apartment, but had undergone some changes since I last saw her.  The floral embellishments on her wrists, neck, knees and ankles are candy cake decorations and her wings are patterned with olives.  I couldn't get a photo that included both pieces that showed the details on the little portable bar on the floor so I've included one of just the bar, which is in itself a work of art, below. 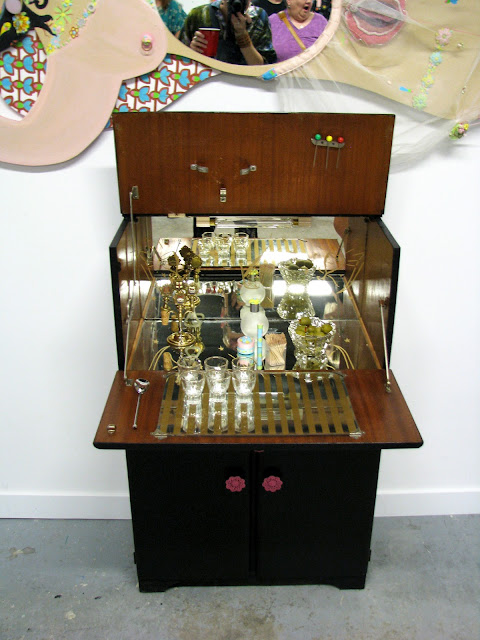 If I win the lottery in this month, this is coming home with me.