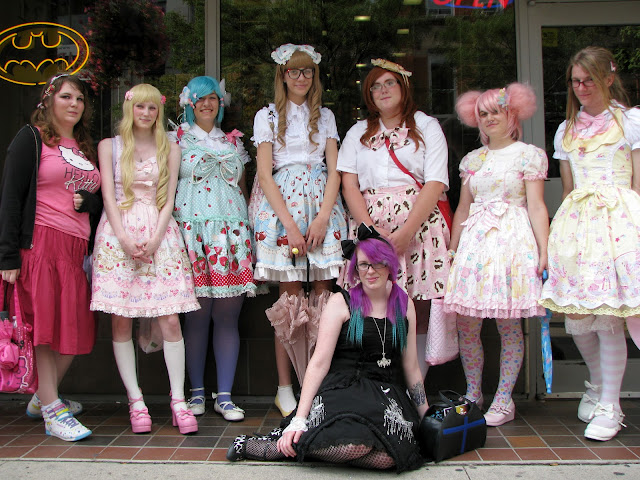 I had just got off the bus when this group decked out in pastels and ruffles passed me, causing me to spin around in hot pursuit and convince them to stop for a photo.  I recognized their style as the Japanese street style, "Lolita", which is unfortunate to share the name with the main character in Nabokov's novel.  While his Lolita was all about looking temptingly sexy, this Lolita style is more about looking cute and elegant, incorporating pastel colours, pretty patterns, bows, lace and ruffles.  Apparently there are different Lolita style; the young woman in the front shows off a Gothic Lolita look.

After reading some of the comments that this photo was receiving, I felt like I needed to add some of my own.  This is a group of friends who happen to share a love of the Japanese street style known as Lolita.  Yes, there is a definitely a sweet and childlike element to it, which has resulted in some people seeing it as "creepy".    I'd like to think that if I had a daughter this age, I would be much happier to see her decked out in an outfit like this, and feeling confident enough to express herself, than if she was wearing a skin-tight mini dress and 6 inch heels, which is not an uncommon outfit for teenagers out on a Saturday night.  To me, that's creepy.  These young woman are dressing up for themselves, not to look sexy to men, and they are having fun.  More power to them!
Posted by Forest City Fashionista at 11:41 PM