Saturday - It's All About Sass and Sparkle 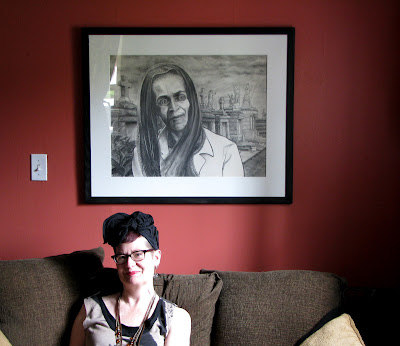 This is a completely gratuitous photo of me in my living room, taken because a) I liked the light coming in through my window, and b) because it shows the awesome drawing I purchased at an exhibit of work by my friend and local artist, Brian Lambert.  The background is a cemetery in New Orleans and the elderly woman in the foreground had some powerful mojo going on.  When I saw the drawing in the show, I figured you can't have too many strong women in your life, and she needed to come home and live with me.

I was feeling rather sassy myself yesterday, and it was finally warm enough to forgo a jacket!   I layered a summer dress over a skirt, and topped it off with the hat/fascinator I got at Fashion Crimes in Toronto last fall.  I took it to New York with me, where it was ardently admired, and it needed a outing.  The fabric is oddly flexible and can be twisted into different shapes, and it's all attached to a hairband.  Unfortunately, the hairband is a bit large, and it doesn't stay on very well.  Anyone have any suggestions on how to remedy this?  I don't have enough hair to anchor it with a clip or comb.

My friend Heather, who took the photos above, and I had our usual apple fritter at the Farmers Market and I saw a young woman in a kaleidoscope of colours and pretty much followed her around the market until I could take her photo.  She was very charming, and knew who I was, as apparently I had photographed her over a year ago.  Her photo will be my in my next post.

We decided it was time for a visit to Talize, which is a store similar to Value Village in that most of the merchandise has been donated but the stock is generally better organized and better quality than Goodwill.  The prices have no rhyme or reason, as they will charge $10 for a secondhand skirt from Joe Fresh, and yet the piece of beaded and sequined awesomeness in the photo below was $6.... 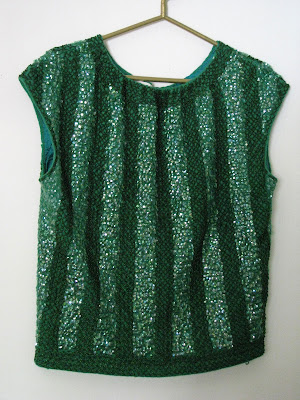 The label says "Imported from the British Colony of Hong Kong", which means it was definitely made before 1997, but from the style of it, I'm thinking closer to the 60's when these beaded tops were quite common.  I've always wanted one, but they are completely impractical to wear; not only are they heavy, but also difficult to clean.  I liked the colour of this one, and the mix of sequins and beads (see closeup below). 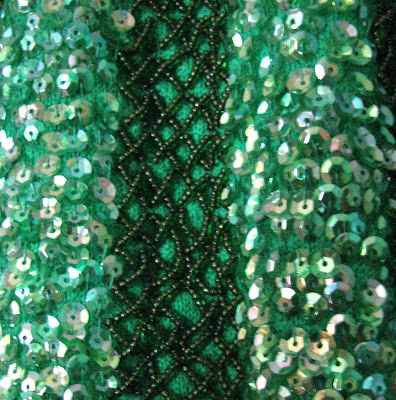