Two weeks ago I was in Toronto for the Gadsden's Toronto Vintage Clothing Show.  The show was held in a lovely building called Wychwood Barns, located on Christie Street, which was built in 1913 by the Toronto Transit Commission to service it's streetcars.  In the last few years, major renovations transformed the barns to a community resource that houses art galleries, artist studios, and a farmers market.  The vintage show was held in the main room that is flooded with natural light through the full length skylight (and if I had thought of it, I would have taken a photo so you could see it).
There were 30 vendors offering up a huge variety of clothing, textiles and accessories from the turn of the century to the 1970's and 80's.  There was a wide range of prices available too, which was both a good and bad thing, because at least if something fabulous is extremely expensive, I will moon over it a while, maybe take a photo, and move on, but when the price is what I consider "affordable", well, then, that's when the trouble starts.  Today's post is all about the people, Part two will be the stuff!

As soon as my friend and I stepped in the doors, we were greeted by this friendly, uber-cool guy who was selling tickets.  He had just purchase a bag of neckties and showed us one he had picked out for a friend.  He's got a nice mix of rockabilly/1930's newsboy vibe, and he plays in a Toronto band called the Grease Monkeys (hands up if you remember when and what this term refers to).

I barely made it past the first table, where I purchased a piece of vintage barkcloth, printed with leaves and pineapples which will make lovely curtains for my bedroom, when I saw this young woman in her sunny yellow coat and red headscarf.  Yes, my light metering sucked.... 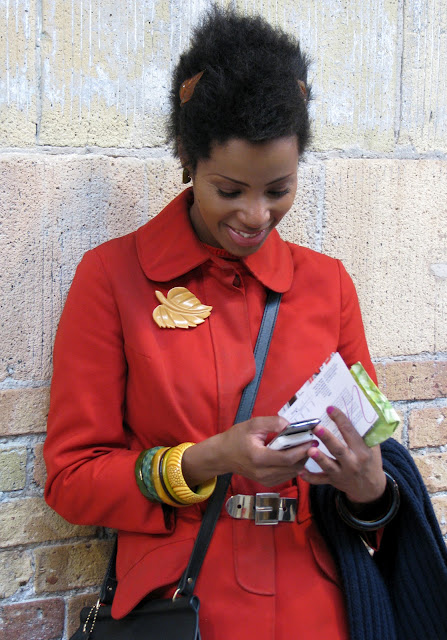 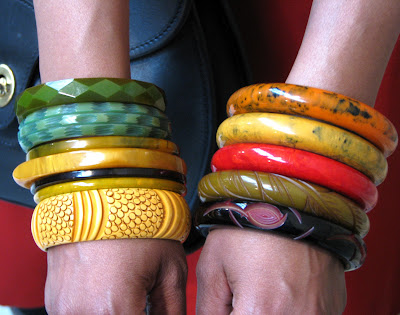 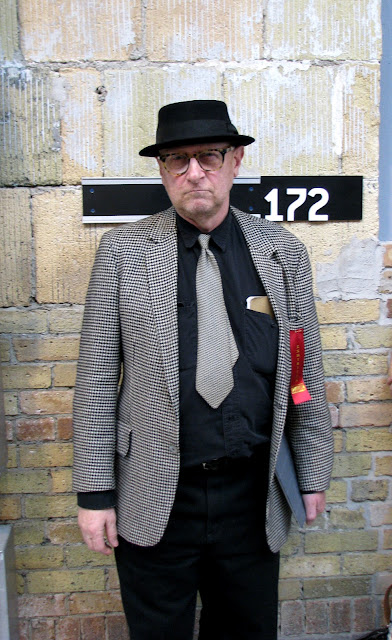 The man in the photo above, giving me his best gangster face, is Yank Azman (awesome name, no?) whose business card says "antiques, books, curios".  He and his wife had a booth at the show, and said he recognized me from my blog, which was a nice surprise as that was the first time that's happened outside of London. 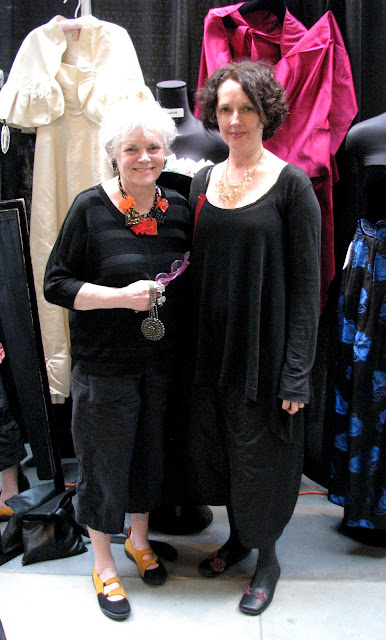 These women alleviated the sombreness of their all-black ensembles with unique footwear and accessories.  Each of the women made the necklaces they are wearing

A "modern cowgirl" with bandana print shirt, western-style jacket and cowboy motif bag. She was wearing her hair in two pony tails, which you hardly ever see anymore, but I thought suited her style perfectly. 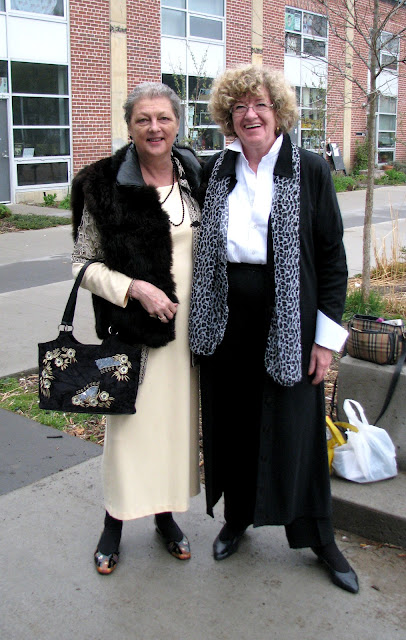 As we were leaving, we had a lovely chat with these two women who had also been at the show, where the woman on the left purchased the shoes she is wearing. I was admiring the tuxedo shirt on the woman on the right and she told me she bought six of them from a men's store that was going out of business and she wears them all the time.  I love the crispness of the turned up cuffs against the sleeves of her coat.
Posted by Forest City Fashionista at 5:17 PM