And the answer to where you would find all three of these items this weekend is:  The annual Sports and Recreation Show at the Agriplex at the Western Fairgrounds.  "But", you say, "you are the least interested in sports of any person I know", and I would reply, "true, dat" (I've been watching season two of Treme).  However, I purchased a ticket to support the Forest City Derby Girls, who have a booth at the show, and along with my pal Heather, we thought we'd see what kind of fun we could have for our $5.  The thing we were both excited to try was the Zip-line.  For the uninitiated, a Zip-line is a pulley, mounted on a cable that is on an incline, and allows the user to get from one place to another using gravity.  I am not a big fan of heights, but I thought the zip-line at the Show would be a good place to start before trying one that is strung over a gorge full of raging rapids.  So, first you have to suit up: 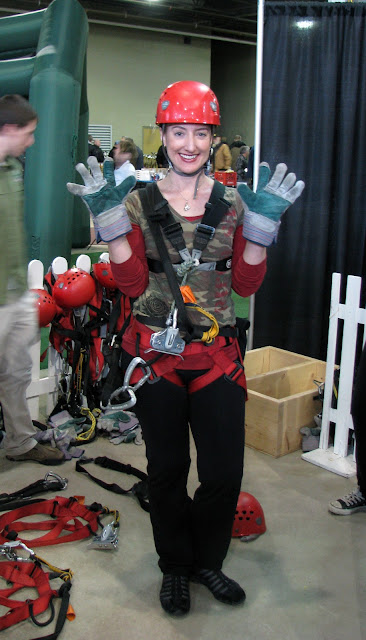 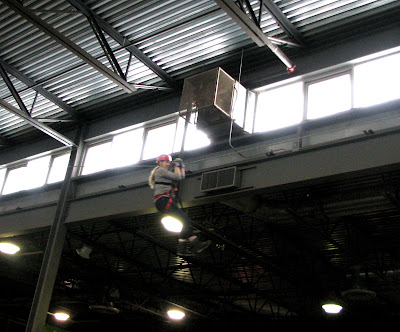 I was getting into the gear while Heather zipped, so I missed it.  This is another woman who went later. 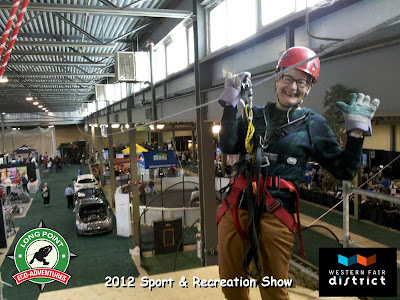 and of course, the adventure would not be complete without a souvenir photo.  Yes, that is me, giddy from the adrenaline rush.   Later in the day, it got quite busy and there were a lot of kids trying it (you have to be 8 and over).  For me, it was the most bang for my buck (it's free!) 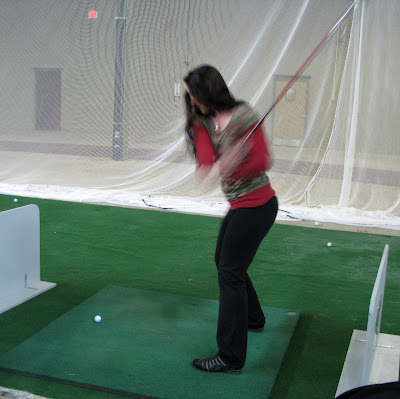 As to be expected at a such a show, there was a LOT of golf stuff - including a mini driving range 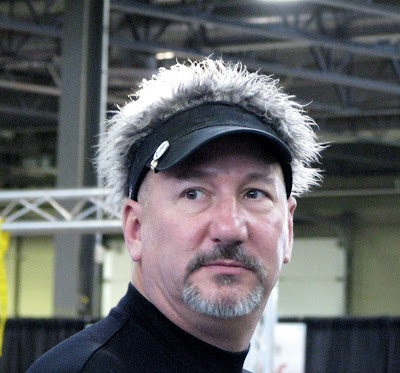 I could not figure out what was up with this guy's hair.  He was working at one of the golf booths, and then I saw another guy with the same look and realized it was some sort of furry wig-attachment to his golf visor. 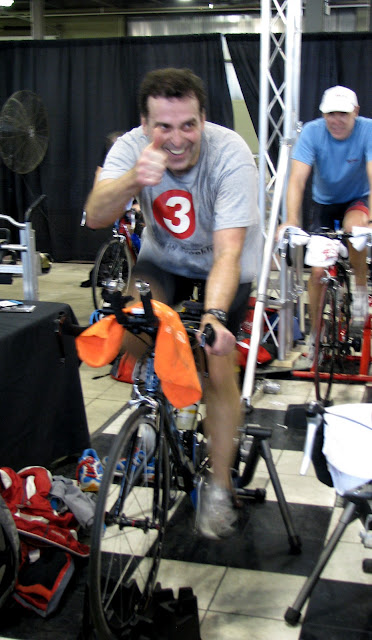 Goodlife Fitness has some demo fitness classes going on, and to my delight, there was local musician Pete Tangredi, (The Cool Mothers) sweating in a spin class
Part two of this post will be up tomorrow, featuring the nicest horse ever, and some very Row-bust women.   In the meantime, the Sports and Recreation Show continues tomorrow, from 9 am - 5 pm at the Western Fairgrounds.  Admission is $5.
Posted by Forest City Fashionista at 5:51 PM