On December 16th a new show opened at Dollirium, the Art Doll Emporium owned by Jacqui Gallant.  The show is called "Silent Night", and features dolls created by Jacqui Gallant, Sheri DeBow, Sarah Legault, Karly Perez, Kerry Kate, DC comics artist Tom Taggart, Lana Hicks, Michelle DiPinto, and local tattoo artist Mike Austin.  In reference to the Christmas season, there are also some colourful and creepy ornaments created by Tom Taggart for sale.  The show runs into January, and if you haven't had the opportunity to see a show at Dollirium yet, this is your chance to see (and purchase!) some unique and beautifully detailed dolls that definitely have more personality than the baby or barbie dolls from your childhood. 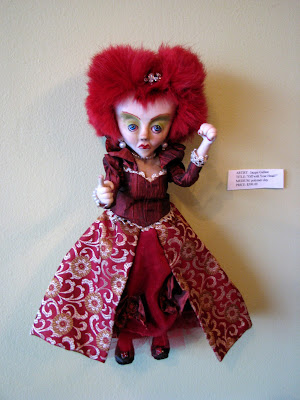 Lana Hicks dresses her dolls in gorgeous outfits with delightful details such as the cat face mary janes worn by the doll in the photo above, titled "Mixie Mayhem". 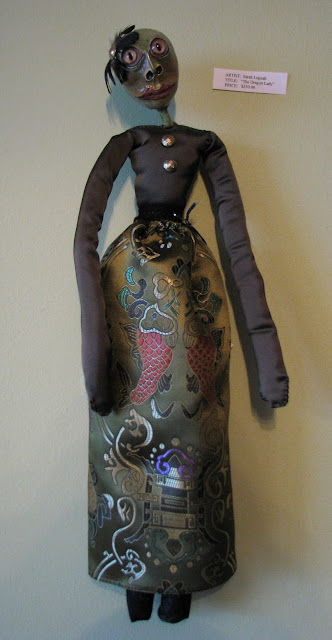 One of my favourite doll artists, Sarah Legault, created the "Dragon Lady" in the photo above.  Her dolls have a primitive style, and are always dressed in luxurious fabrics

Mike Austin contributed his "Creepy Sailor Jerry" to the show

California artist Sheri DeBow's dolls remind me of the artist herself with their masses of tangled blonde hair, large eyes and full lips.  The one above is titled, "Hannah, with her picture still looking for mama" 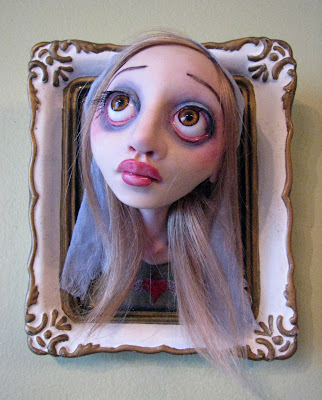 Karly Perez hand dyes the fabric she uses to make the clothing for her dolls and whatever she used to dye the fabric for the dress worn by "Hedda" above,  makes the doll smell like brown sugar!

A reader had asked what size the dolls were, so I have included this photo of the exhibit space to give an idea of their scale.  Most of the dolls are between 12" and 20" in height.
Posted by Forest City Fashionista at 10:54 PM