It's All About the Socks 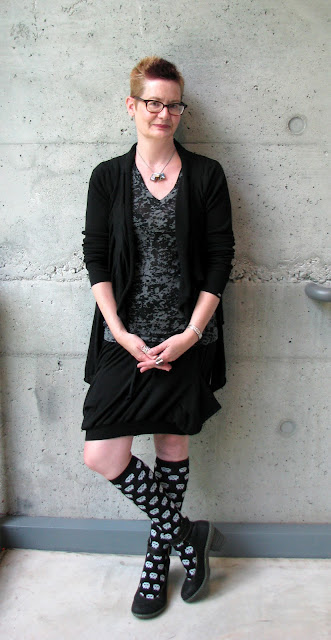 So even though I encourage people to wear less black and more colour, especially in the summer, it appears that I am ignoring my own advice.  In the case of the outfit above, it was all built around the socks, which are one of my favourite things right now.  The socks are from the Uber Cool Stuff booth at the Metropolitan Artisans' Market.  They have just enough lycra so they stay up where they are supposed to be all day, but not cut off your circulation.  I swear that the pattern on them looks like the Atari Space Invaders video game creatures, although the store owner thinks they're supposed to be skulls.  I'm voting for the Space Invaders, which makes them way cooler than skulls (which have been done to death, ha, get it?)  Take a look at the closeup below-- tell me those don't look like little space invaders? 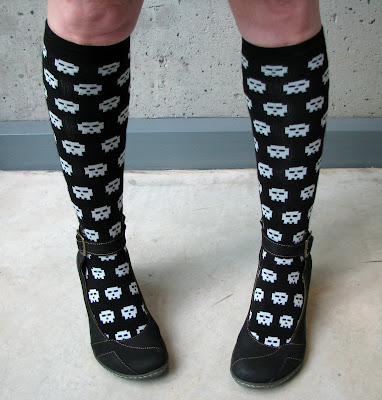 As for the rest of the outfit:   El Naturalista heels available at From Mars (very comfy, and they have ankle straps!), my favourite standby skirt, a t-shirt from the Balisi outlet store, sweater from Frilly Lizard and a scrabble tile necklace from Pieces of Me Pendants.  I purchased the necklace at the Handmade Festival, but you can also get them at their etsy shop here, and at the Metropolitan Artisans' Market.
Posted by Forest City Fashionista at 10:22 PM