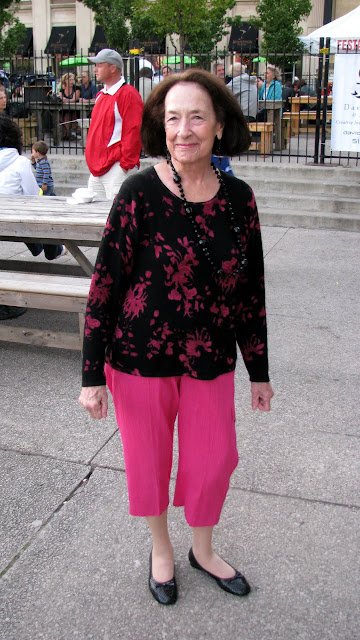 A friend spotted this woman at the Festa Italiana, and suggested that she would be a good blog subject because of a) her outfit and b) because she seemed so full of life and was enjoying herself thoroughly with her friends and family.  After speaking with her, I decided I would have taken her photo no matter what she was wearing, although I think she looks great in the pink and black, especially with the jet bead necklace and ballet flats.  She was just lovely, and thrilled to be singled out for a photo.  I'm pretty sure she said she was 87 (if I'm adding a few years, I apologize, but I know she is in her 80's) but she had more spark and personality than many people half her age.  One of the reasons I enjoy doing this blog so much is that it provides an opportunity for meeting people like her!
Posted by Forest City Fashionista at 7:59 PM 1 comment: 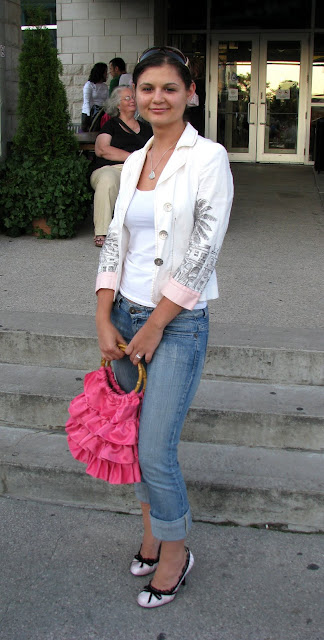 Men did not have the monopoly on style at the Festa Italiana--there were some very well-dressed women as well, such as this young lady.  Her delightfully frilly bag and shoes stood out against the clean lines of her clothing, and I love the print and pink cuffs on the jacket.
Posted by Forest City Fashionista at 3:28 PM 12 comments:

While there are many reasons to love the annual festival of Italian culture that is happening at the Covent Garden Market this weekend, my top three this year are as follows:  the lemon gelato sold by the little Italian Dessert and Espresso wagon on Talbot Street near King, watching the (mostly senior) couples dance to the live band that plays at night, especially the ones you can tell have been tripping the light fantastic together for years, and, because it's one of the few times you can see a lot of well-dressed men downtown, on a weekend.  As proof, I offer the two photos below: 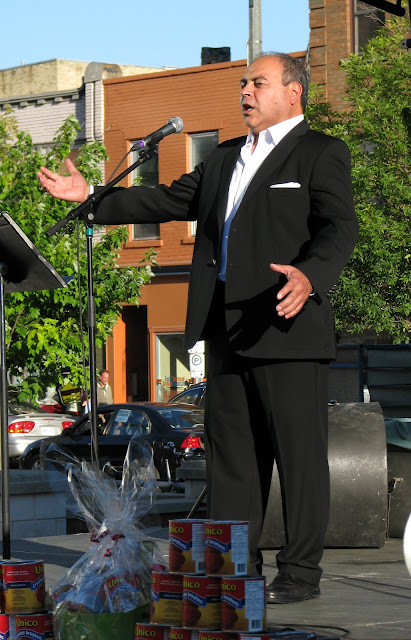 Granted, this man (Riccardo Lopez, of Il Tenore restaurant) is performing, so perhaps we would expect he might dress better than the spectators, but having seen a number of live musicians, I know that's definitely not always the case.  As far as I'm concerned, a man in a nice suit is a man in a nice suit. 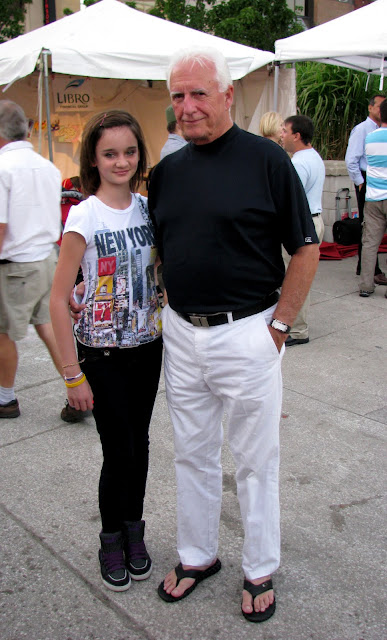 And then there was this man, who is posing with a young lady I presumed to be his granddaughter (who I thought looked very cute in her NY t-shirt and dark denim jeans).  I don't even know if he is Italian or not, but for the sake of argument, I'll say he is.  He is doing the summer casual attire beautifully, and there were many men in attendance last night who were wearing something similar.
Posted by Forest City Fashionista at 10:38 AM 1 comment: 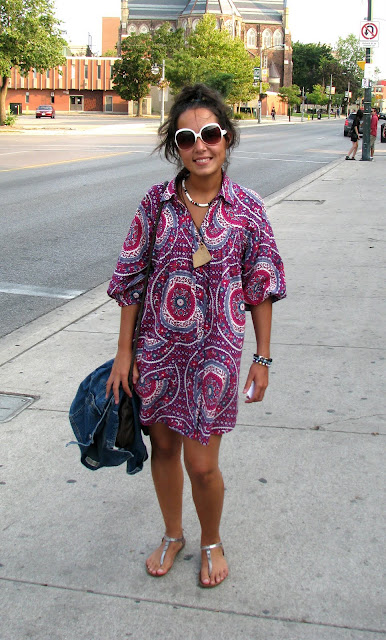 This lovely young woman is from Spain, and I'm not sure whether she understood why I was asking to take her photo, but she stopped and smiled nonetheless.  The print tunic dress, accessorized with interesting jewellery and the oversized white-framed shades makes her look like she could have just spent the day at a beach on Ibiza and is heading out for dinner at a chic cafe.
Posted by Forest City Fashionista at 11:40 PM 1 comment: 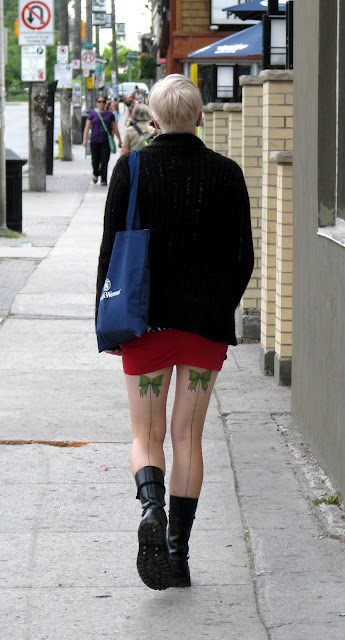 So, ahead of me on the street I saw this, which was enough to make me sprint down the street after her.  I'm not a fan of tattoos unless they are unique and well-executed, and the bows and "seamed stockings" effect definitely were both 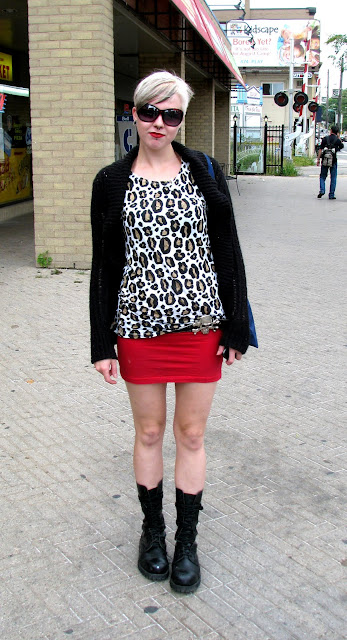 Turns out, she was just as striking from the front.  Love the hair, the bold leopard print with the red skirt, and red lipstick, and the large skull pin.  As seen in the closeup below, her fondness for skulls wasn't limited to her accessories.  Her ink was done by Anthony at True Love Tattoo, which accounts for the amazing design and execution. 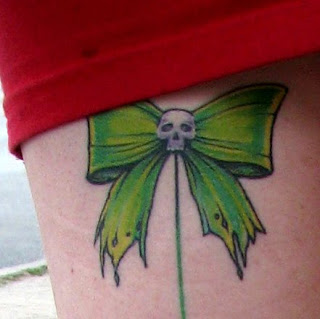 Posted by Forest City Fashionista at 8:12 PM No comments:

Today's post is a bit of a detour from the usual "on the street" photo, but since it involves dresses, it's still style-related, and I like to promote an artist's work when I see something I like at a local gallery.   There is a very cool exhibit on now, until September 18th, at the Framing and Art Centre, located at 188 Kent Street, near Richmond Street, titled "Franky's Laundry".   The artist is Franky Ducharme, a woman whom I know absolutely nothing about (perhaps if she sees this, she'll email me and tell me about herself), and the exhibit is of some lovely dresses she has made from recycled paper.  The dresses are human-sized, and made from various types of paper, including recycled LCBO paper bags, and a Calgary newspaper that was found in an old house.    If you want to stop by and have a look, the Framing and Art Centre is open Mondays, Tuesdays and Saturdays from 10 am - 5 pm, and Wednesdays - Fridays from 10 am - 6 pm, closed on Sundays. 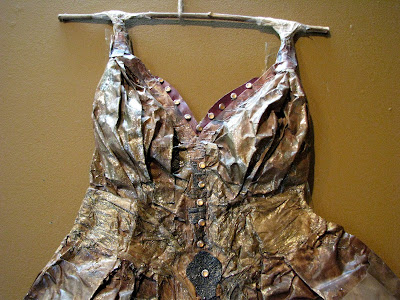 Detail from dress made from recycled LCBO bags 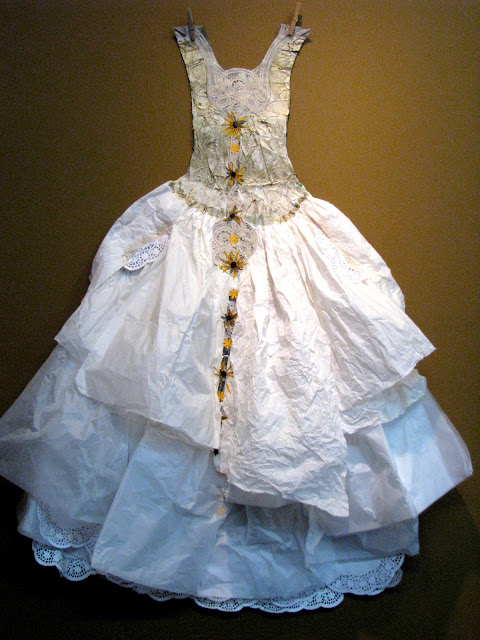 A perfect wedding dress for a lifesize paper doll 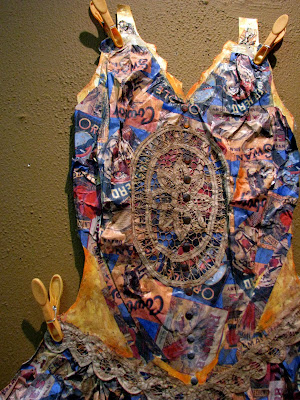 Detail of my personal favourite--love the colours!
Posted by Forest City Fashionista at 12:20 PM 13 comments: 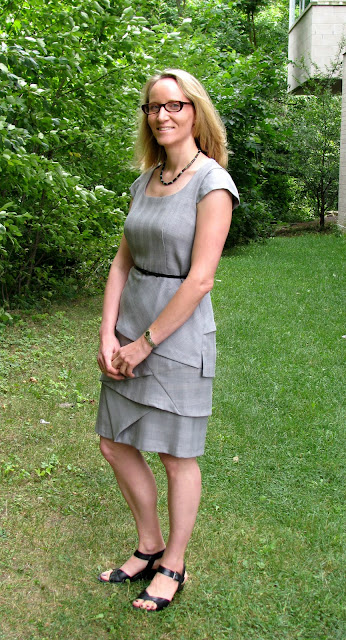 One of our faculty members, not known for being a big wearer of dresses in the past, has been showing up at work wearing some very flattering ones lately so I asked if she would pose for my blog.   It was great to see her in something that is pretty and that fits her so well--the shape hugs her curves, makes her waist look tiny, and the layering effect in the skirt adds visual interest.
Posted by Forest City Fashionista at 7:48 PM No comments: 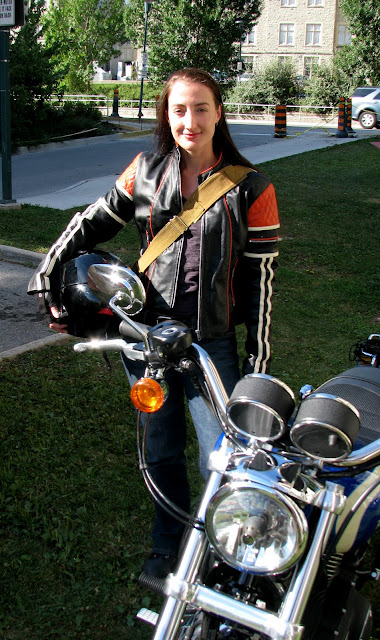 This fabulous motorcycle jacket is one of many cool coats this woman has in her collection (a couple of her other ones have appeared on my blog here and here).  Even though she drives a Harley, she's not wearing the ubiquitous black Harley jacket; the cream and orange accents on her jacket (which is not by Harley Davidson) turn up the style quotient and tone down the hardcore biker look.
Posted by Forest City Fashionista at 7:37 PM 8 comments:

A while back I was interviewed by Alex Weber, a summer intern at the London Free Press, for an article about three local bloggers, and the article appears in today's issue of the Free Press.  The full story, with photos, is in the hard copy edition, and an abbreviated version appears online here  Overall, I thought the article was well done, and I was interested to learn about two other local style-related blogs and their authors.  However, I am afraid that I may now forever be known as, "Forty-something Long", which sounds like a man's pants size (if you read the article you'll understand).
Posted by Forest City Fashionista at 9:46 AM 1 comment: 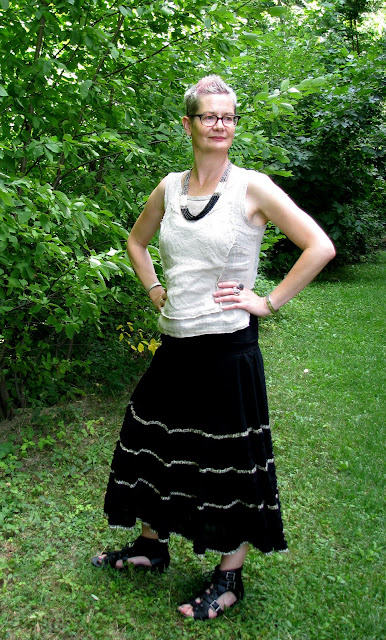 I haven't posted one of my own outfits for a while, and I was rather happy with this one; it made me feel a bit like I was on a safari vacation, instead of just standing behind our building on campus.  For those of you who are interested in such things, the skirt is from Elizabeth Noel, the linen top is thrifted, sandals are from Spring, and I bought the African bead necklace on Ebay.
Posted by Forest City Fashionista at 12:03 PM No comments: 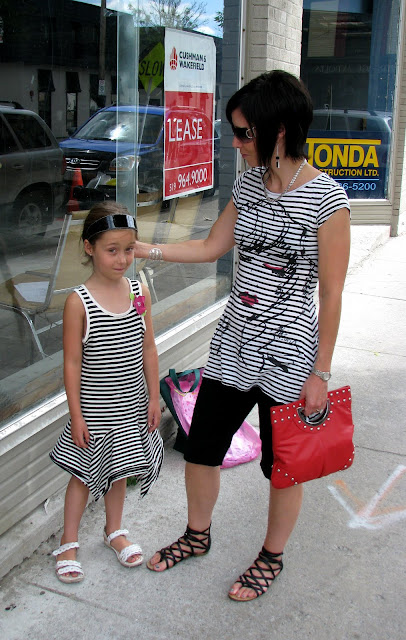 I'm not usually a fan of mothers and daughters dressing alike, but in this case they look great because they're each doing their own age-appropriate, stylish take on the black and white stripes, and they've got funky accessories (love the red bag!)
Posted by Forest City Fashionista at 7:29 PM 1 comment: 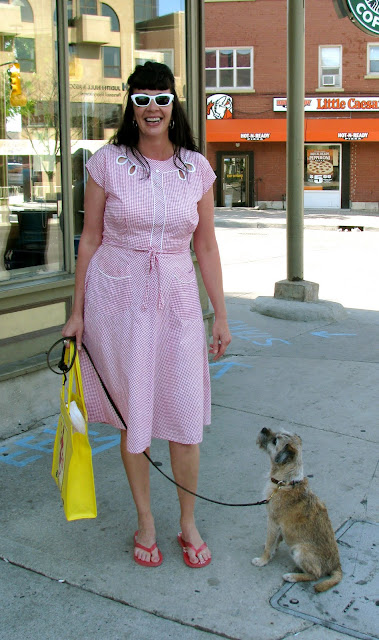 I've known this woman for years, and she has always had her own standout style and a great appreciation for vintage, especially from the 50's.  She's never followed trends, but I think she's probably started a few, and she's got the perfect accessory--a devoted canine admirer!
Posted by Forest City Fashionista at 7:40 PM 1 comment:

Keeping Your Cool (In 40 Degree Humidex) 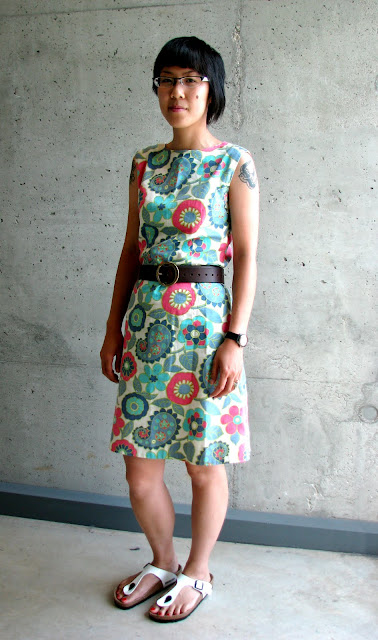 When the humidex is hovering around 40 degrees, it's hard enough finding something comfortable to wear, without having the added complication of it being work-appropriate.  My super-stylish friend Lili has solved this problem with a retro-print shift dress.  What makes this dress even more interesting is its back story.  It was made in 1966 by one of Lili's friends when she went to summer school, and discovered she wasn't allowed to wear pants.  It's 44 years old, and yet looks perfectly modern with the addition of a classic leather belt and white Birkenstock sandals.
Posted by Forest City Fashionista at 10:55 PM 3 comments:

The Battle of the 'Burns 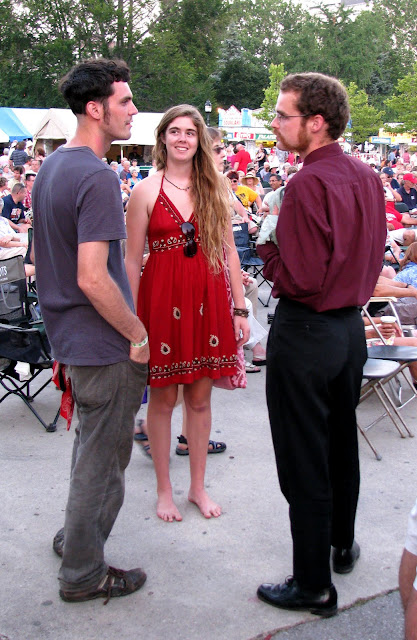 I had forgotten that I had taken this photo at Home County Folk Festival so I'm posting it now.  I thought that the two men, each showing a different style of sideburn, look like they were squaring off, while the young woman in the pretty red sundress waits to see what's going to happen.  If there would have been a "battle of the 'burns", the guy on the right definitely would have won.
Posted by Forest City Fashionista at 7:43 PM No comments: 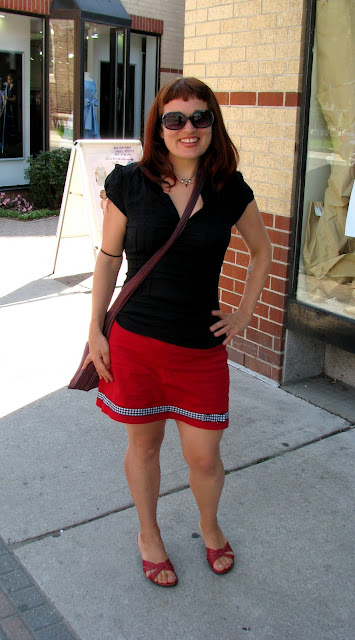 This young woman looked stylish and very coordinated in her bright red skirt and sandals.  The flirty gingham trim and bow on the skirt is a great detail, and it turns out, the skirt is from Weezi Design Studio, the home of all things cute and girly!
Posted by Forest City Fashionista at 11:55 AM 2 comments: